Tearful Donovan back at Florida for court-naming celebration 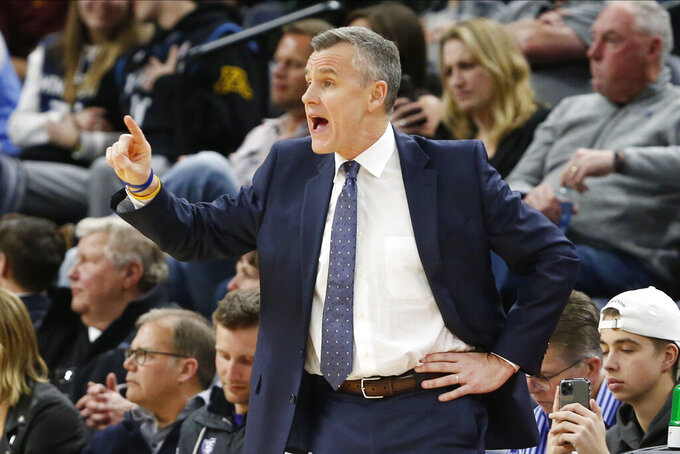 Oklahoma City Thunder's head coach Billy Donovan directs his team against the Minnesota Timberwolves in the second half of an NBA basketball game Monday, Jan. 13, 2020, in Minneapolis. The Thunder won 117-104. (AP Photo/Jim Mone)

GAINESVILLE, Fla. (AP) — Former Florida coach Billy Donovan wiped tears from his eyes when he first saw the court that will forever bear his name.

Donovan returned to the place he put on the college basketball map for the first time in nearly five years to see the O’Connell Center floor named after him. His signature was placed at both ends, between the 3-point line and the key.

Donovan and his family got a private unveiling Friday and a public celebration Saturday at halftime of Florida’s 84-66 victory over Vanderbilt. It was the loudest the O’Dome has been in years.

Donovan thanked former players, former assistants, his former boss, his family and the Gainesville community for helping him reach this career pinnacle.

"It's just really emotional for me, and I'm really humbled,” Donovan said. “I've always said this: It takes a lot of people to really contribute and help. … Everybody contributed. I'm just thankful that I was around such great people. I think that's what it speaks to is the quality of people that I was fortunate enough to be around here at Florida."

Donovan left Gainesville in 2015 after a 19-year career that included two national championships, four trips to the Final Four and 14 NCAA Tournament appearances. In short, he made hoops matter at the football-first school.

Donovan went 467-186 at Florida and added another 35 wins at Marshall, becoming just the second coach in Division I history to notch 500 career victories before reaching his 50th birthday. The other was Hall of Famer Bob Knight.

The 54-year-old Donovan was introduced with a lengthy video tribute Saturday in front of a sellout crowd that included dozens of former players and a few of his former assistants. Stetson coach Donnie Jones drove up after beating Kennesaw State and sat near former Clemson and Wyoming head coach/longtime Florida assistant Larry Shyatt.

“It’s an incredible honor for him,” said Beal, who played one season at Florida before turning pro. “I told him earlier that I was a chocolate chip in part of his ultimate cookie of all the guys you’ve had come through and all the success you had."

“It’s crazy to see how many people he had, how many great players and just how great of a program he helped build and how it prospered under him,” Chiozza said. “I don’t know if there’s ever been something like this where you walk in and you see 15 NBA guys in here and we come together, we’re talking like we just played on the same team and most of us were years apart.

"It’s just through that relationship with coach Donovan that you have that brotherhood you have just being a Florida alumni. It’s just like you have family forever here.”

Donovan’s most popular player, Joakim Noah, made a late entrance. Noah, Horford, Taurean Green and Corey Brewer made up the core of Florida’s back-to-back title teams (2006-07).

"They were an incredible group,” Donovan said. “Connected as a team, played for one another, highly competitive. I think that they should go down as one of the greatest teams of all time. … They started off unranked and won a national championship. Then won a national championship starting the season ranked No. 1 with all the expectations to do it. And they did it under both circumstances.”

Donovan had a lot to do with Florida’s success.

And he’s carried it to the next level. The Thunder are 32-22 and sit sixth in the Western Conference at the All-Star break. They are 26-11 since Thanksgiving, the fourth-best mark in the league over that span.

Donovan has won more than 60% of his games in the NBA, the best among coaches who made the jump from college over the last 30 years.

No one at Florida has been surprised by his success, evidenced by the turnout and all the tributes.

“It's been a lot,” Donovan said. "It's been a lot. It's hard to really take it all in and digest because you're seeing so many different people that you want to be able to catch up with and connect with."