Williams leads No. 22 LSU past 'Bama for 9th straight win 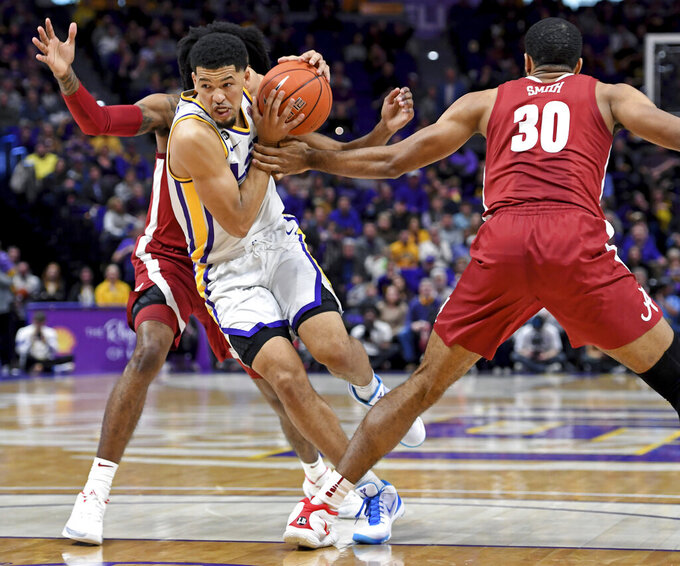 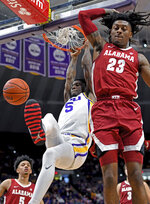 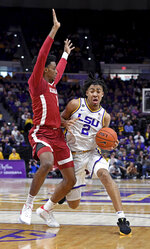 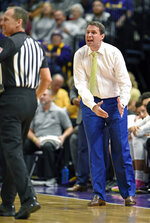 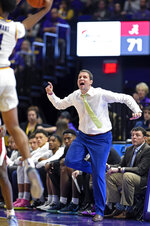 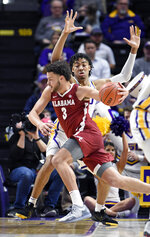 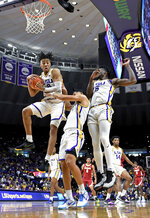 BATON ROUGE, La. (AP) — When Emmitt Williams' double-pump dunk gave No. 22 LSU a 15-point lead over Alabama with two minutes to go, Tigers coach Will Wade implored his team keep up the intensity and close it out comfortably for a change.

Williams had 23 points and 11 rebounds, and LSU defeated Alabama 90-76 on Wednesday night for the Tigers' ninth straight victory — but only their first by more than four points in seven games.

“What we were doing wasn't sustainable,” said Wade, who earlier in the week bemoaned his team's lack of focus after getting leads and said he wasn't going to be nice about it any more.

"It's nice to win the games, but you've got to win them by better margins,” Wade continued. “We need to get as good a seed (in the NCAA Tournament) as we can get — if we can get in the thing.”

Skylar Mays scored 18 points and freshman Trendon Watford had 17 points to go with a season-high 15 rebounds for LSU (16-4, 7-0 SEC), which is the only SEC team unbeaten in league play.

“It was one of our better games of the year,” Wade said. “Watford did a great job on glass and finishing around rim. Emmitt was an absolute monster.”

Jaden Shackelford scored 21 points for Alabama (12-8, 4-3) which saw its four-game winning streak snapped. Alex Reese had 17 points and Kira Lewis Jr. 13 for the Crimson Tide, which trailed by as many as 20 points in the first half and never got closer than nine points after that.

“Definitely not our best effort,” Alabama coach Nate Oats said. “We've been playing a lot better than that. ... Just couldn't get over the hump, so a lot of credit to them. They're a hard-playing team. There's a reason they're first place in the SEC.”

Alabama trimmed the lead to 62-53 on Jaylen Forbes' 3 with 13:14 to go, but LSU seized momentum back soon after with a crowd-stirring 6-0 run that began with Mays' breakaway layup after Aundre Hyatt's steal. Mays then stole the inbound pass and went right back to the basket. His layup rolled out, but Hyatt came storming down the lane to dunk the putback.

Marlon Taylor completed the spurt when he rebounded Darius Days' miss and bounced back up on the other side of the rim for a twisting dunk.

“We definitely took some steps today as far as what everyone's kind of been been worried about — us closing games," Mays said. "We showed growth today. ... We did a good job not letting the scoreboard dictate how hard we competed.”

Williams had 17 of his points in the opening 15 minutes, highlighted by three dunks — two of them on fast breaks. He also made seven of eight free throws during that stint.

“He’s our enforcer. He’s our anchor on defense. He’s the most vocal guy. He's the backbone,” Mays said. "He's part of the reason we’re on a nine-game win streak. That's something he’s going to be consistent with and that's something we can bank on.”

LSU took a 51-33 lead into halftime after Hyatt put back Javonte Smart's partially blocked layup attempt in the final seconds.

“You really dig yourself a hole against a team like (LSU) that plays as hard as they do,” Oats said. “That many points in the first half is going to be too hard to overcome.”

Alabama: John Petty Jr., the Tide's second leading scorer, had one of the highlights of the night with a driving tomahawk dunk in the second half. But that was his only basket of the night on seven shots. He also made free throws to finish with four points, well below his average of 16.4 points per game coming in.

LSU: Although LSU missed 13 of 16 3-point shots, the Tigers still hit nearly 53% of their attempts because of aggressive play in the paint and in transition. LSU made 19 of 20 free throws and all five starters scored more than 10, with Smart and Days scoring 12 each. The Tigers outrebounded Alabama 49-31 and scored 20 second-chance points to Alabama's five.

LSU “destroyed us on the boards,” Oats said. “It just caused major problems.”

Wade made a point of stressing that LSU was upended at home by Arkansas last season after starting 7-0 in conference play.