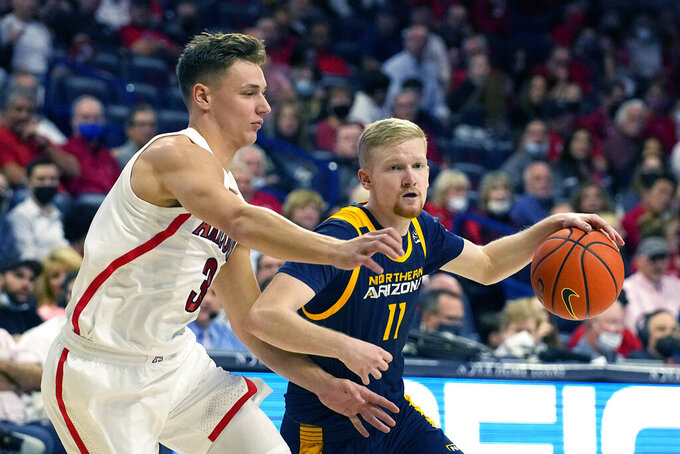 The Wildcats looked a lot like Tommy Lloyd's old team in the coach's Arizona debut, dishing out 25 assists on 28 baskets to open the season with an 81-51 win over Northern Arizona on Tuesday night.

“I saw Gonzaga out there,” Northern Arizona coach Shane Burcar.

He naturally brought elements of the Zags with him to the desert and his tenure got off to a rousing start, thanks to Arizona's core group of returning players.

“I think we've got a good core group that can get Arizona basketball back to where everybody wants us to be the next two to three years,” Lloyd said. “Obviously, we're going to give this year everything we've got and see what we can squeeze out of this year, but we've got a good nucleus going forward."

Arizona's length gave Northern Arizona (0-1) problems at both ends of the floor all night long.

The Wildcats jumped into passing lanes and hounded the Lumberjacks into mistakes, scoring 24 points off NAU's 21 turnovers. Arizona also dominated inside on the offensive end, outscoring Northern Arizona 40-22 in the paint.

“Their length bothered us all night,” Burcar said. “We had to manipulate different sets and we didn't get the ball moving side to side at all in the first half and a couple of times in the second.”

Lloyd was considered the coach-in-waiting at Gonzaga, but the opportunity to run an elite program like Arizona was too much to pass up. He inherited NCAA sanctions that could drop any day and a roster that lost four of its top six scorers from a year ago.

Lloyd did manage to convince a solid core of players to return, replenishing the rest of the roster with top-level transfers and freshmen.

The new and the old needed a little time to mesh, missing shots and a few defensive assignments to allow Northern Arizona to hang around.

Once the Wildcats hit the accelerator, they ran away from the Lumberjacks.

Using their length to create turnovers and block shots, the Wildcats went on a 15-3 run to go up 31-15, the crowd roaring with each made basket.

Arizona stretched the lead to 42-22 at halftime and Koloko set the tone for the second half by blocking Northern Arizona's first shot, then later flashed a big smile after swatting another into the crowd.

Northern Arizona would have needed a nearly perfect game to have any chance at upsetting Arizona. The Lumberjacks didn't get it, but did enough good things that the trip should help them once Big Sky Conference play starts.

“This has to help us,” Burcar said. “The one thing I said in the locker room was let's make sure we have our heads up and not make excuses right now. We're not good enough to beat Arizona and that's OK. You've got to know who you are, too.”

Arizona took a while to get going before showing off the type of athleticism McKale Center fans are used to seeing.

Cone was a huge pickup for Northern Arizona after playing 47 games over two seasons at Virginia Tech. The the sophomore guard confidently stroked in a 3-pointer early, but struggled the rest of the night to break free from the combo of Kriisa and Terry.

Cone finished with seven points on 3-of-11 shooting with eight turnovers.

“We put him (Kriisa) on their best player to start the game and he bird dogged him,” Lloyd said. “Then we put some on him with DT, which is great to pass the baton to the next guy, and the combination of who put on him and how we guarded him was really effective.”