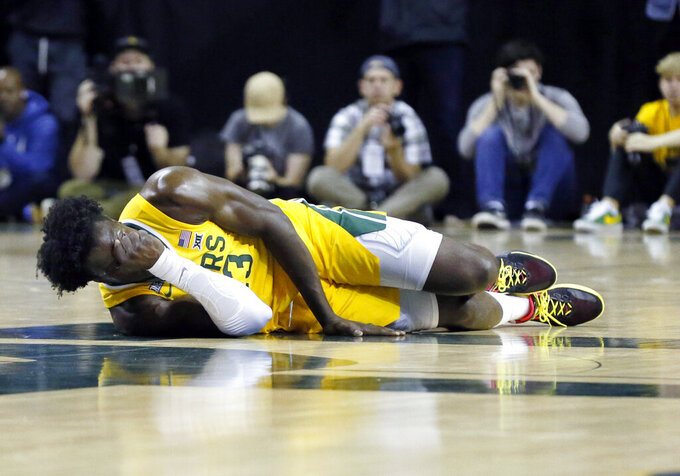 Baylor forward Jonathan Tchamwa Tchatchoua lays on the court with an apparent leg injury during the first half of an NCAA college basketball game against Texas on Saturday, Feb. 12, 2022, in Waco, Texas. (AP Photo/Ray Carlin)

Baylor big man Jonathan Tchamwa Tchatchoua had surgery Tuesday to repair multiple ligaments in his left knee from a gruesome injury that ended his season for the seventh-ranked and reigning national champion Bears.

Tchamwa Tchatchoua, the junior forward known as “Everyday Jon” for his consistent high-energy approach in games and practices, got hurt without any contact in the first half of Baylor's 80-63 win over No. 20 Texas on Saturday. The 6-foot-8, 245-pound Cameroon-born player was going down the court after a missed shot by the Bears when his left leg turned awkwardly and he crumbled to the floor in obvious pain.

"Everyday Jon's biggest strength is every day he’s got a smile and he’s upbeat, and that’s made us a lot more upbeat,” Baylor coach Scott Drew said. “Knowing Jon, he'll probably be at rehab first thing in the morning.”

Drew described the surgery as “extensive,” and said it was too early to know the best-case scenario for Tchamwa Tchatchoua's recovery and return.

In a tweet after getting hurt and before the surgery, Tchamwa Tchatchoua wrote, “Baylor family I appreciate all the love & prayers!! All my trust is in GOD so I know everything is going to be ok!”

The Bears (21-4) play at 11th-ranked Texas Tech on Wednesday night.

Tchamwa Tchatchoua is one of only three players who has appeared in all 25 games so far for Baylor. He has come off the bench to average 8.4 points and a team-leading 6.8 rebounds (fifth in the Big 12) in about 21 minutes a game. He scored a career-high 21 points last week at Kansas State.

Flo Thamba, a 6-10 senior post, has started every game this season. The Bears used their big man combo the same way last season when winning their first national title.

After Tchamwa Tchatchoua got hurt with just more than eight minutes into the Texas game, Thamba went on to play a career-high 30 minutes. He had his first career double-double (12 points, 11 rebounds) and four blocked shots.

“I’ll be more than fine. I’ll be good,” Thamba said Tuesday about playing extended minutes. “We had practices in the summer, so I can last longer in a game. I’m still going to be aggressive, I’m still going to be physical. It’s more of the aspect of playing smarter. You have to avoid situations where you know you’re going to get a foul call. As far as my physicality and intensity, that’s not going to change.”

Freshman forward Jeremy Sochan can play at the No. 5 spot. The Bears also have 7-foot sophomore Zach Loveday, who has played in 10 games so far this season.

“It seems like everybody’s going five guards anyway, but Jeremy’s already had reps in there and Zach’s played there all year,” Drew said. “So those are your two initial reactions. And then from there, whatever the game dictates.”