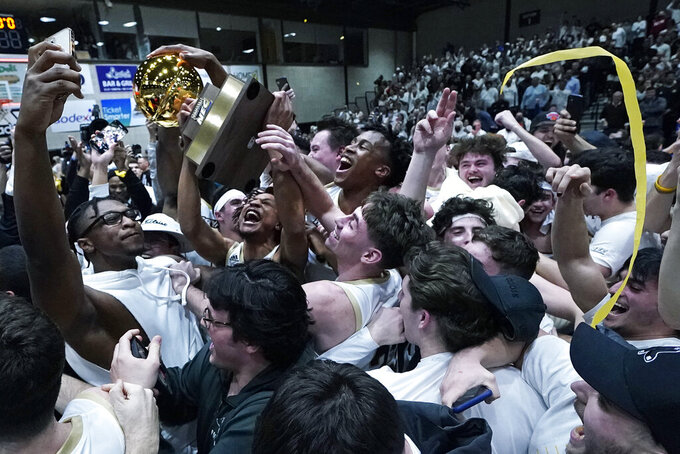 SMITHFIELD, R.I. (AP) — Peter Kiss had 34 points and a season-high five steals and top-seeded Bryant cruised to 70-43 win over Wagner on Tuesday night for the first Northeast Conference tournament championship in program history.

But the game was marred by a fight in the stands among fans. With 4:37 to play and the Bulldogs leading 68-32, play stopped for nearly 30 minutes. A small section of seats mostly occupied by Wagner fans sat next to Bryant’s student’s section and the contentious atmosphere led to a scuffle. None of the players or coaches made it into the stands, though Wagner’s Will Martinez attempted to and was ejected from the game and several players had to be restrained.

Bryant (22-9) set the Division I program record for wins this season and clinched its first NCAA Tournament berth since beginning the transition from Division II in 2008.

Kiss, the nation's leading scorer at 24.7 per game, made 13 of 23 from the field and 4 of 5 from 3-point range and finished with six rebounds, three assists and five steals. The senior has scored at least 25 points in 13 of his last 17 games and has scored at least 30 points 10 times this season.

Raekwon Rogers led No. 2 seed Wagner (21-6) with 13 points on 6-of-8 shooting. The rest of the Seahawks shot 22% (11 of 50) from the field. Alex Morales, who averages 18.2 points per game and was recently named the NEC player of the year for the second consecutive season, scored three points on 0-of-16 shooting for Wagner.

Charles Pride had 13 points and career-high tying 17 rebounds for Bryant.

Kiss had a shot knocked away by Morales and then Rogers made a layup to give the Seahawks a 2-0 lead 38 seconds in but Bryant ripped off 36 of the next 40 points. Pride made back-to-back layups to give the Bulldogs the lead for good about 2 minutes later before Kiss took over — muscling up shots in the lane, hitting contested 3s, throwing and catching alley-oops.