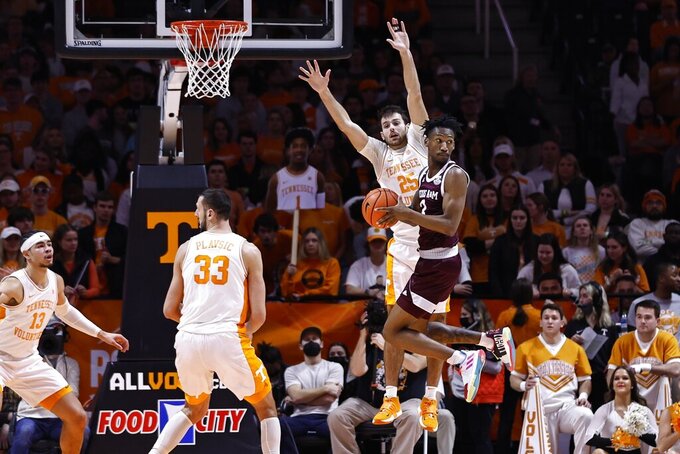 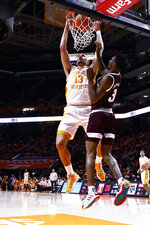 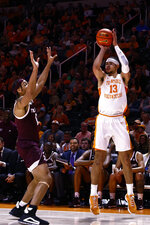 KNOXVILLE, Tenn. (AP) — It's been a while since Olivier Nkamhoua established his presence on the court.

Tennessee led by as many as 13 in the first half. With just over 8 minutes left in the game, the Aggies (15-7, 4-5) trimmed the difference to 60-59. That's when Nkamhoua took a big step forward and connected on a jumper from the free throw line. That basket started a 16-2 run. A tip-in by John Fulkerson and a pair of 3-pointers by Justin Powell were critical in that spurt.

“We've learned that the game's never over,” said Tennessee coach Rick Barnes. “When you get relaxed and casual, it can get close. Our guys didn't flinch. It helps when Olivier does what he does. Guys are getting better at knowing when to shoot.”

Nkamhoua has made a conscious effort to improve his profile. A pre-game discussion with a Vols assistant was taken to heart.

“I need to start building my identity,” Nkamhoua said. "I need to shoot when the shot comes to me. I want to be one of the more physical players inside.

“I want to be a Swiss Army Knife-type of player. The type of guy who does everything.”

Kennedy Chandler led the Tennessee scoring with 16 points. He also had seven assists. Josiah-Jordan James and Zakai Zeigler each had 14 points and Santiago Vescovi added 13.

Texas A&M, which has lost five in a row, was led by Wade Taylor IV with 19 points. Quentin Jackson added 14, Henry Coleman had 12 and Tyreece Radford 11.

Aggies coach Buzz Williams was frustrated with the 16 turnovers his team committed.

“We fought, we tried and we competed,” said Williams. “We're doing the right things.

“We can't have 10 live-ball turnovers and give up 13 points on them. I don't feel sorry for us. We have to do better with that.”

Texas A&M: Struggling with what is now a five-game skid, the Aggies need to stop the bleeding. ... Their only loss at home this season has been to Kentucky. ... Duke transfer Henry Coleman III is averaging 14.6 points and shooting 66% in SEC games.

Tennessee: Vols freshman Kennedy Chandler is one of 10 finalists for the Bob Cousy Award, signifying the top point guard in the country. He is the only freshman among the 10. ... After falling to Texas Tech and the University of Texas this season, Tennessee finally beat a team from the Lone Star state. ... The last two weeks of February will be tough for the Vols. They have home games with No. 5 Kentucky (Feb. 15) and No. 1 Auburn (Feb. 26).

Texas A&M: The Aggies have a home game against Missouri on Saturday. The teams met in Columbia earlier this season and A&M came away with a 67-64 victory.

Tennessee: The Vols have a rematch on the road with South Carolina on Saturday. On Jan.11, Tennessee managed a 66-46 victory over the Gamecocks.