Cone gets 18 off bench as No. 24 Virginia Tech tops Longwood 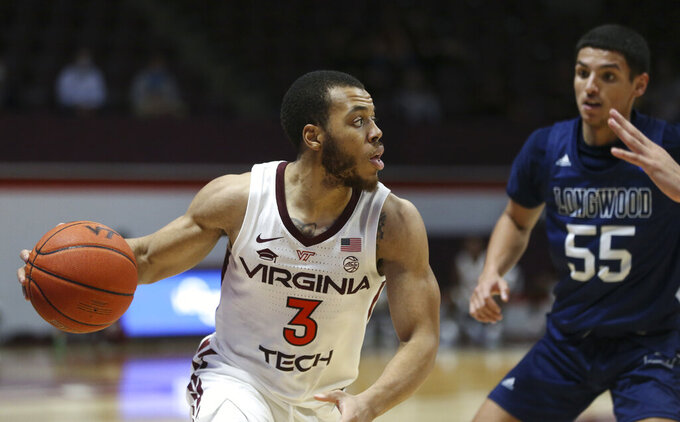 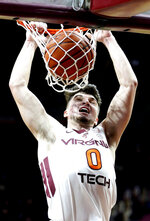 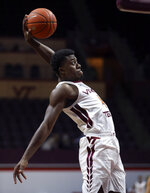 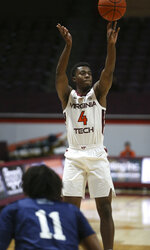 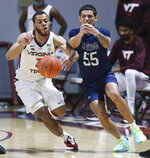 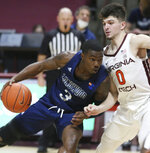 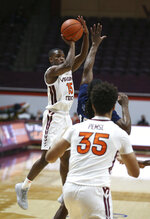 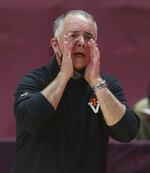 BLACKSBURG, Va. (AP) — Jalen Cone has regained his confidence — and the rest of the ACC needs to watch out.

The 5-foot-10 sophomore scored 18 points off the bench to lead No. 24 Virginia Tech over Longwood 84-58 on Monday night.

Cone shot 6 of 15 from the floor – all 3-pointers – for the Hokies (7-1), who struggled for 30 minutes but heated up down the stretch to win their third consecutive game. Cone, who missed three games early in the season with an injury, evenly dispersed his production against the Lancers, hitting three 3-pointers in the first half and three in the second half.

“Really just the confidence,” Cone said of his second straight strong performance. “Coach (Mike) Young has had unlimited confidence in me, and he’s been telling me to shoot the ball — that he wants me to get back in the groove. Just hearing that from the man in charge definitely gives me confidence to knock down shots and take the shots that I know I can make.”

The Lancers trailed 45-40 after a basket by Juan Munoz with 11:39 remaining. The Hokies, though, scored on their next 13 possessions to pull away, with Cone hitting three of Virginia Tech’s five 3-pointers in that span.

The Hokies were a little sloppy on the defensive end, with Longwood shooting 44% (24 of 55) from the floor, but Virginia Tech finished with 20 assists and just nine turnovers. The Hokies also got 45 points from their bench, all of which helped them close their nonconference schedule with a 6-1 record.

Longwood: Despite their record, the Lancers have been competitive with a young roster that includes three freshman starters and only one senior. They’ve lost three games by three points or less and easily could have a winning record. They might experience some growing pains once Big South Conference play begins, but they also have enough pieces to be a major headache for a lot of teams.

Virginia Tech: Back from injury, Cone is starting to find his rhythm. A noted 3-point shooter – he shot 45.7% from beyond the arc a season ago – Cone has hit 11 3s in the past two games and gives balance to a Virginia Tech team that has played extremely well heading into the holiday break.

“He scores them in bunches,” Young said. “He can really deflate a team’s defense with his ability to stop on a dime and rise up and make them. I think this is his fifth game back, and I thought for the first time, against Coppin State, I saw the little (gym) rat that I came to appreciate a long time ago, flying off pin-downs and other actions that we put him in and catching it, getting in the air, and getting it down. I thought he looked even more like himself tonight.”

Following three wins in a seven-day stretch and now heading into an eight-day layoff for the holidays, the Hokies should stay in the Top 25 rankings.

“We definitely have a good team, and everyone can play on our team,” Aluma said. “I don’t think it’s a question about that. So I’m excited to see people step up in their roles a little bit.”