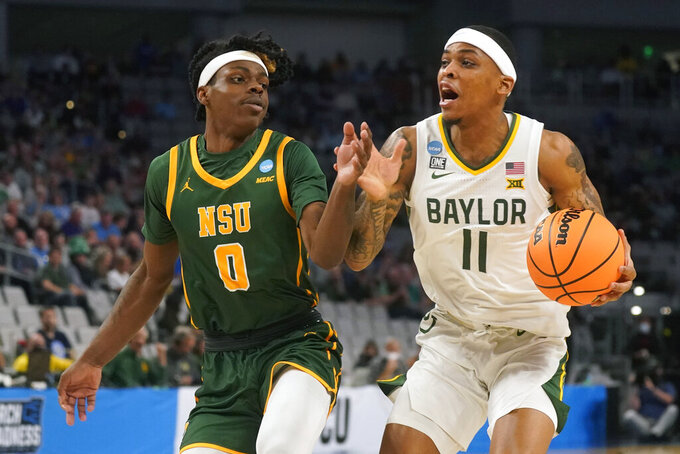 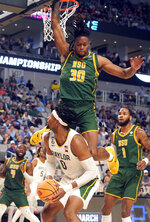 FORT WORTH, Texas (AP) — Matthew Mayer just knew it was a perfect pass he turned into a half-ending breakaway dunk for defending national champion Baylor. He wasn't really sure what happened before he got the ball.

“I thought it was like a rebound or something, and then all of sudden the ball was just right in front of me,” Mayer said. “I was like, ‘Wow, that was great.’”

Mayer scored a career-high 22 points, including that punctuating half-ending dunk with a salute, as the top-seeded Bears opened the NCAA Tournament with an 85-49 victory over Norfolk State on Thursday.

Jeremy Sochan did grab a rebound to start the play, and got credited with an assist on Mayer's dunk.

“I didn’t really pass it to him, but I’ll take it. I’ll take it,” the pink-haired Sochan said with a chuckle.

After Joe Bryant tumbled to the floor when missing a layup, Sochan took a couple of dribbles while still in the lane. Norfolk State's Tyrese Jenkins then reached from behind and swatted the ball out of his hands — into the air past midcourt, where it bounced once to a breaking Mayer, who got past Terrance Jones for the dunk.

“First, I should have dumped it off to my big man, who was wide open. I fell, so I couldn’t really see what happened,” said Bryant, the Mid-Eastern Athletic Conference player of the year who had 15 points.

Freshman standout Sochan had 15 points and seven rebounds for the Bears (27-6), who had to travel less than 100 miles from their Waco campus for the East Region opener and first NCAA tourney game at Dickies Arena. They will play eighth-seeded North Carolina, a 95-63 winner over Marquette, in the second round Saturday.

Mayer, who finished 8-of-12 shooting with four 3s, directed a salute with his left hand toward the Spartans’ pep band after the dunk with the Bears up 43-27 at halftime.

Jenkins hit a 3-pointer to start the scoring in the second half, but Norfolk State never got closer.

The 16th-seeded Spartans (24-7) were playing 10 years and a day after pulling off one of the biggest upsets in NCAA Tournament history. They were a No. 15 seed and 21 1/2-point underdog when they beat Missouri 86-84.

Norfolk State was one of the biggest underdogs in first-round games this year, at 20 1/2 points, according to FanDuel Sportsbook, and never came close this time.

“At some stretches, I think we let the moment get away from us a little bit,” Jones said.

Flo Thamba scored 14 points and Adam Flagler had 11 points for the Bears. James Akinjo, the graduate transfer from Arizona who also previously played at Georgetown, had 10 points and 10 assists in his first-ever NCAA tourney game.

Baylor, which shot 57% from the field and made 11 3-pointers, led throughout. Flagler hit a 3 and made a nifty floater in the lane to make it 5-0.

“It was fun to watch. Not many things to complain about this game for sure,” said coach Scott Drew, a week after Baylor lost in the Big 12 tournament quarterfinals. “I think that was a conscious effort of everybody to come out and be a lot more aggressive in both halves. And we did that, and set the tone early.”

Norfolk State: Senior guard Jalen Hawkins, the team’s second-leading scorer at 13.4 points a game, didn’t play the first half because of a violation of team rules. “Integrity first,” Jones said when asked about what led to Hawkins being penalized. The guard didn’t enter the game until 16:45 remained and the Spartans were down 56-35 by time he took his first shot two minutes later — an airball on a long 3-pointer. He then came out of the game, and never returned.

Baylor: Mayer has been inconsistent at times this season as a full-time starter after no starts his first three seasons. But the 6-foot-9 senior is a high-energy player on both ends of the floor who can score in bunches. He could have a huge impact in the tourney with the Bears missing their big man known as “Everyday Jon.” Jonathan Tchamwa Tchatchoua suffered a season-ending left knee injury Feb. 12.

“After the game, after the buzzer came off and it went off and then just walking on the side, seeing them smiling and cheering, it meant a lot to me. It was special,” said Thamba, who is originally from the Democratic Republic of the Congo, grew up in South Africa and also lived in England and France before coming to the United States.

The Bears have advanced past the first round in five consecutive NCAA appearances since opening-round losses to 14th-seeded Georgia State in 2015 and 12th-seeded Yale the following year.