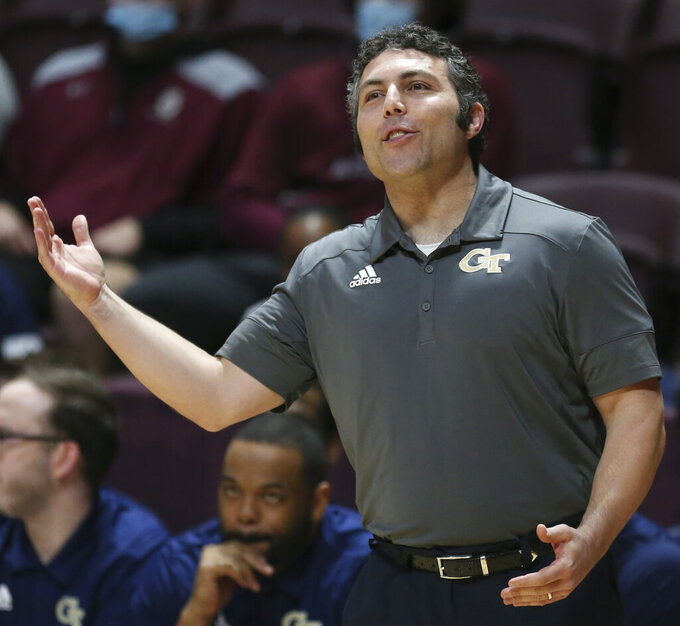 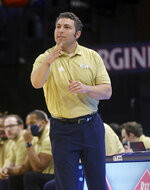 ATLANTA (AP) — The fall from championship celebrations to postgame apologies has been shockingly swift for Georgia Tech coach Josh Pastner.

Georgia Tech's tumble from the 2021 Atlantic Coast Conference Tournament title to last place has been painful.

A three-game losing streak has left Georgia Tech (10-15, 3-11 ACC) at the bottom of the ACC standings. The low point was Tuesday night's 76-61 home loss to North Carolina State, which had been in last place.

“It’s very difficult because we feel like we can compete with anybody in this league,” said guard Kyle Sturdivant. “We’ve just got to figure it out."

The Yellow Jackets' lack of scoring depth behind Michael Devoe and Jordan Usher has been a problem all season. The offensive woes were magnified Tuesday night when the Wolfpack raced to a 28-8 lead before leading 51-26 at halftime.

Pastner takes pride in his team's defense but he had no explanation for the Yellow Jackets' inability to guard in the disastrous half.

All he could do was apologize — over and over.

The coach apologized five times in a four-minute opening statement following the game and then added a sixth apology later in the news conference.

“I don’t have an explanation for that first half other than the fans deserve an apology because that’s not our standard, that’s not Georgia Tech’s standard,” Pastner said as part of his opening statement.

Pastner said the responsibility is “all on me. So I’ve got to do a better job.”

Thanks to last year's ACC championship and the school's first NCAA Tournament appearance since 2010, there is no indication Pastner's job is in jeopardy.

Pastner received a three-year contract extension, through the 2025-26 season, last year. He is 92-91 overall and 45-60 in ACC games in his sixth season at Georgia Tech.

As Georgia Tech prepares for Saturday’s visit to Pittsburgh, Pastner is also facing recruiting challenges. He has no signees this year and appears likely to depend heavily on the transfer portal to replenish the roster.

Devoe, the ACC's third-leading scorer at 18.6 points per game, is one of three senior starters.

“It’s hard to recruit when things aren’t going well,” Rob Cassidy, Rivals.com national director of recruiting, said Wednesday. “But if you rush in and take a lot of mid-level recruits, it’ll hurt you even more. There's no reason to do that any more with the transfer portal.”

It has always been a challenge for Georgia Tech to sign top in-state recruits. Cassidy said the NCAA's NIL rules make it even more difficult for schools competing for recruits against traditional powers.

“Really the rich get richer,” Cassidy said. “If Kentucky wants a kid from Atlanta and Georgia Tech wants the kid from Atlanta, the NIL options are so much better at Kentucky. It’s no contest just because of the money.”

Some decline was expected for Georgia Tech this season.

The Yellow Jackets lost 2021 ACC Player of the Year Moses Wright and Jose Alvarado, voted the league's top defensive player, from last season's team which lost to Loyola Chicago in the first round of the NCAA tourney.

Even so, the freefall to the bottom of the standings is shocking.

The Yellow Jackets are in danger of becoming the first ACC team since Virginia in 1977 to finish last one year after winning the conference championship.

Pastner said he can't promise wins but he vowed to find solutions for the defensive malaise against N.C. State.

“We were too cool, casual and cute defensively and that doesn’t fly,” Pastner said. “... I’m going to try to do all we can to not let that happen. Our defense has got to hold us, especially when we’re going through those scoring droughts."

It would also help if better defensive efforts translated to wins.