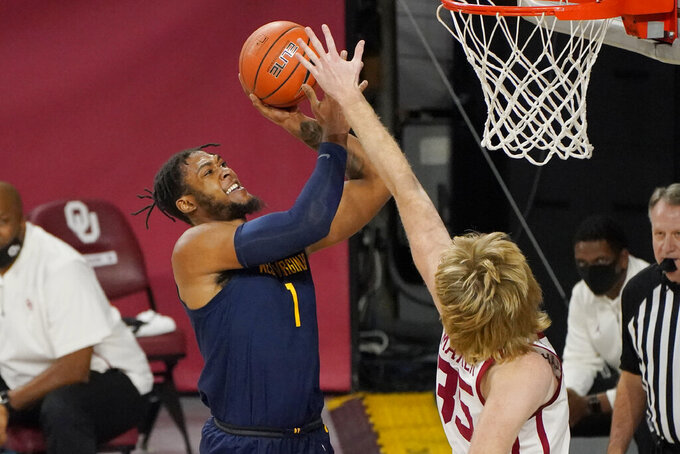 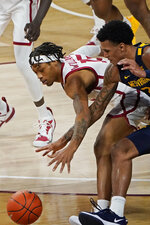 NORMAN, Okla. (AP) — Umoja Gibson made eight 3-pointers and scored a season-high 29 points, and Oklahoma recovered after blowing an 18-point halftime lead to beat No. 9 West Virginia 75-71 on Saturday.

The Sooners (6-1, 2-1 Big 12) have won three straight and four of five against the Mountaineers (8-3, 1-2), including a season sweep in 2019-20. The Sooners also have won four of their last seven games against ranked opponents.

Taz Sherman and Jalen Bridges had 19 points each for West Virginia, and Miles McBride had 15. The Mountaineers’ previous losses this season came to No. 1 Gonzaga and No. 3 Kansas. The loss kept coach Bob Huggins from recording his 300th win as West Virginia’s coach.

With the score tied at 60, Austin Reaves knocked down a long 2-point jumper and then a 3-pointer – his only one of the game, in nine attempts – with 3:40 left, giving Oklahoma the lead for good.

“Austin has got the confidence to do what he needs to down the stretch and no question that he’ll make some shots going forward,” Oklahoma coach Lon Kruger.

West Virginia kept the pressure on and twice pulled within three points in the final minute, but a basket by De’Vion Harmon (10 points) and two free throws by Reaves (13 points) kept the Sooners on top.

Kruger also praised Gibson, a transfer from North Texas who went 9 of 12 from the field and kept the Sooners afloat offensively for much of the second half as they weathered West Virginia’s rally. He was 8 of 11 from deep.

“He made big shots,” Kruger said. “We needed every one of them, obviously, in the second half down the stretch there ... when the game was tied. He stepped up there. He was great. He works as hard as anyone in the country on putting extra time into the gym and when a young guy does that, it’s easy to cheer for him and I’m happy to see him rewarded.”

West Virginia shot 23% (7 of 30) from the field in the first half, allowing Oklahoma to build a 38-20 halftime lead. The Mountaineers went more than 8 1/2 minutes without a basket during one stretch as Oklahoma’s advantage ballooned from 19-16 to 33-17.

It didn’t take long for West Virginia to catch up. The Mountaineers opened the second half on a 20-7 run and pulled within 45-40 on a steal and layup by McBride with 12:38 left. Consecutive 3-pointers by Sherman, Emmitt Matthews Jr. and Sherman tied the game at 49 with 10:10 left.

“At halftime we adjusted our defense, mainly, because we were giving up way too many wide-open shots,” Bridges said. “We weren’t playing with energy. We didn’t really take an offensive approach to the second half."

West Virginia: The Mountaineers lost two forwards this week in freshman Isaiah Cottrell (torn Achilles tendon vs. Northeastern on Tuesday) and sophomore Oscar Tshiebwe (left team for personal reasons on Friday). They’ll have to adapt to losing two big inside players, and Saturday’s game was their first opportunity to experiment with how that’s going to look. Bridges replaced Tshiebwe in the starting lineup.

Oklahoma: The Sooners are trying to survive a particularly rough stretch of their schedule that has them facing four straight top-15 opponents (Texas Tech, West Virginia, Baylor and Kansas). A win over a ranked foe always is a good tonic and should help in building a NCAA tournament resume.

West Virginia: Will stay in Oklahoma to visit Oklahoma State on Monday before returning home for a game next Saturday against Texas.

Oklahoma: Will visit No. 2 Baylor on Wednesday and No. 3 Kansas on Saturday.