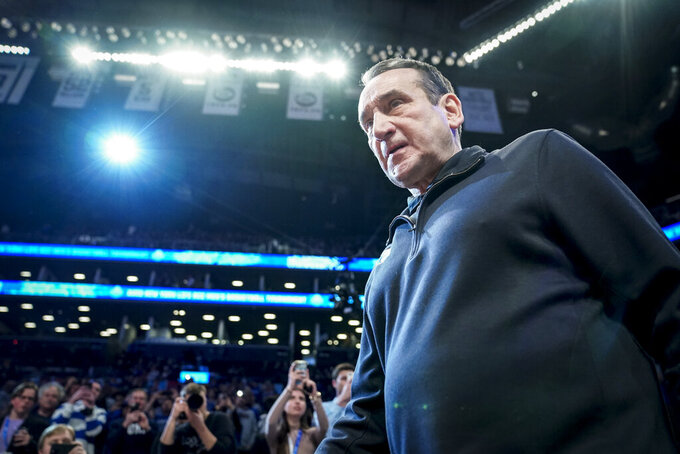 Hard to blame him with all the complaints that the Zags don't play anyone and are in a weak conference.

The resume should speak for itself. Gonzaga has been to the national championship game twice in the past four years, reached the Sweet 16 10 times and annually plays one of the nation's toughest nonconference schedules, winning most of those games.

And add one more: another No. 1 seed in the NCAA Tournament.

Top-ranked Gonzaga is the No. 1 overall seed for the second straight season in the 68-team bracket released Sunday. The Zags open against No. 16 seed Georgia State in Portland, Oregon, on Thursday in a West Region that includes No. 2 seed Duke in coach Mike Krzyzewski's final NCAA Tournament, No. 3 Texas Tech and No. 4 Arkansas.

“It's quite an accomplishment by this group to go all the way through a season like this and end up with another No. 1 seed," Few said Tuesday after the Zags clinched their eighth West Coast Conference tournament title in nine years. “I know sometimes people just expect that, but it doesn't magically happen. There's so much work that goes into it, everybody's gunning for us.”

Gonzaga (26-3) has been a No. 1 seed three of the past four seasons and would have added another had the pandemic not canceled the 2020 postseason. The Zags were the No. 1 overall seed a year ago and reached the national title game, losing to Baylor.

Gonzaga has the type of roster to make another deep run.

The Zags are big, their post anchored by preseason All-American Drew Timme and freshman sensation Chet Holmgren. Senior Andrew Nembhard is often the best player on the floor and leads a group of guards who can shoot from the perimeter or blow past defenders off the dribble.

Gonzaga led the nation in scoring, is No. 1 in the KenPom.com efficiency ratings and won games by an average of 22.5 points.

“They can shoot the ball, have a ridiculous inside game, defend well, big and have good shooters,” said Saint Mary's coach Randy Bennett, whose team is the No. 5 seed in the East Region. “Their offense is as good as any in the country.”

Get past Georgia State and Few could face one of his former assistants in the second round, Boise State coach Leon Rice. The eighth-seeded Broncos open against No. 9 seed Memphis.

The Tigers are in the NCAA Tournament for the first time since 2014, finally breaking through with one of Penny Hardaway's highly touted recruiting classes. Memphis had the nation's No. 1 recruiting class in 2021, but took a while to gel and get healthy after a rash of injuries.

The breakthrough should take some of the pressure off Hardaway, who faced criticism early in the season while the Tigers were struggling.

Duke will be looking to send Krzyzewski out on top.

The 75-year-old Hall of Fame coach announced before this season that it will be his last after 42 years at Duke, five national championships and a record 1,196 victories.

The Blue Devils (28-6) are the No. 2 seed in the West, but slipped up in two previous Coach K finales, losing to North Carolina in his final game at Cameron Indoor Stadium and to Virginia Tech in his last ACC Tournament.

“I think our group overall had a terrific year," Krzyzewski said Sunday. “The thing that waned at the end was a lack of practice time. I thought our guys got worn out and we compensated by trying not to wear them out as a result. I thought our defense really took a dip. Before this next game, we have to get back to playing Duke defense.”

Texas Tech did not see a drop-off after coach Chris Beard bolted for rival Texas.

Coach Mark Adams leaned on the defensive principles he honed as Beard's assistant in his first season as a head coach, leading the Red Raiders to 25 wins and a trip to the Big 12 title game, where they lost to Kansas.

The Red Raiders open Friday in San Diego against Montana State, in its first NCAA Tournament since 1996.

No. 6 Alabama faces the winner of the First Four game between Rutgers and Notre Dame in San Diego. The Scarlet Knights were on the NCAA Tournament bubble, but got into the bracket in consecutive seasons for the first time since 1974-76.

The Muss Bus is looking for another deep March run.

Eric Musselman has turned Arkansas into a national power during three seasons in Fayetteville, including a run to its first Elite Eight since 1995 last year.

The Razorbacks (25-8) had a couple of shaky stretches early in the season, but reeled off 14 wins in 15 games to all but lock up an NCAA Tournament bid. Arkansas lost to Tennessee in its regular-season finale and was bounced by Texas A&M in the SEC semifinals, but has lots of length and always plays hard under Musselman.

The Razorbacks face a stiff test in their opener Thursday in Buffalo against America East champion Vermont. The Catamounts have a senior-dominated team that's full of shooters and rarely turn the ball over.

No. 5 seed UConn plays No. 12 New Mexico State in the other Buffalo game.