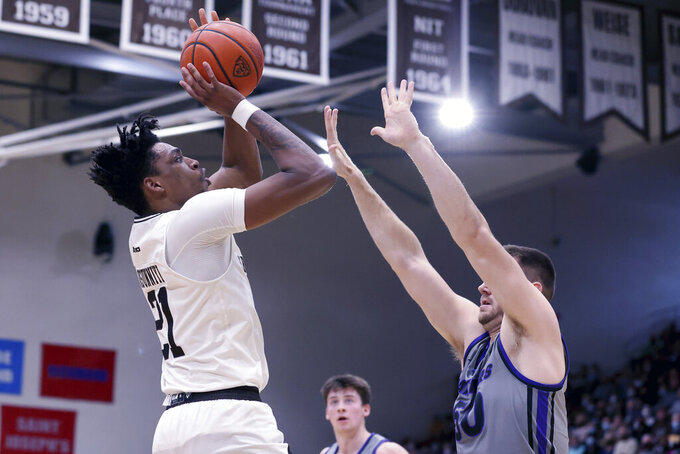 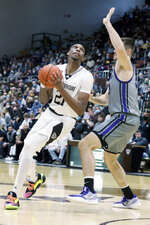 “This is huge,” Green said. “We didn’t have the start that we wanted, obviously. I’m just proud of how we were able to learn and build, regardless of starting 1-3.”

Northern Iowa had lost 10 of its last 11 matchups with ranked teams, but Green said St. Bonaventure’s poll position helped to inspire his team.

“I think it does,” Green said. “Knowing that they are ranked what they are. We know that we are capable of winning games like this. We all believe in each other. There is a little motivation behind it.”

Green did most of his damage from 3-point territory, making a career-best 9 of 15, to match his career high for scoring and equal the team record for 3s set by Noah Carter in a loss against Western Kentucky last season.

That was more than Green made in going 8 of 28 from long range over Northern Iowa’s first four games. After winning player of the year in the Missouri Valley Conference as a sophomore, Green missed all but three games last year because of injuries in both hips that required surgery. It took a few weeks for him to regain his rhythm.

“I’ve been asked about it since we started, and all I’ve said is let him play some games,” Northern Iowa coach Ben Jacobson said. “AJ got us going today. He has the ability to carry us through stretches. But we have a good team. We have other guys who can make big shots.”

Northern Iowa shot 51.6% from the field against a St. Bonaventure defense that held four of its first five opponents under 35% shooting. The Panthers made 15 of 31 from beyond the arc.

Kyle Lofton had 21 points, seven assists and four steals for St. Bonaventure (5-1). Dominick Welch added 20 points and Jaren Holmes had 15 as the Bonnies set a season high in scoring.

“When you score 80 points, you should win,” St. Bonaventure coach Mark Schmidt said. “This game was more from a defensive standpoint. When we needed to get a stop, they made a basket.”

St. Bonaventure got back in the game by outscoring Northern Iowa 26-7 over seven minutes to erase a 19-point deficit midway through the second half.

Green’s foot-on-the-line 2-pointer gave Northern Iowa a 73-66 lead with about six minutes to go. Heise then scored nine points on four consecutive possessions to put the Panthers up 84-72 with 2:10 remaining.

Green scored every point during a 17-1 run that gave Northern Iowa a 47-34 lead before halftime. He made six from long range for 22 first-half points, doubling his scoring average from the first four games.

Northern Iowa: After staying close until the closing minutes of its previous loss against No. 13 Arkansas, the Panthers finished the job in their second matchup with ranked foe. It’s the first win this season against a Division I opponent for a team that was predicted to finish third in the MVC.

St. Bonaventure: Opening a four-game homestand with its first loss of the season was a letdown from beating Boise State, Clemson and Marquette to win the Charleston Classic championship. The Bonnies were trying to start 6-0 for first time since 1973-74.

Green was leaping toward the basket when he flung the ball out to Heise for a straightaway 3-pointer that beat the shot-clock buzzer and gave the Panthers an 80-72 lead with 3:18 left.

“Some guys may on that play feel like they have to get fouled, or have to score the basket,” Jacobson said. “He had the presence of mind and trust in his teammates to make that play. Now we get a 3 instead of maybe a blocked shot and they go down and score.”

Ranked for the first time in 50 years, St. Bonaventure could fall out of the AP Top 25 after this stumble.