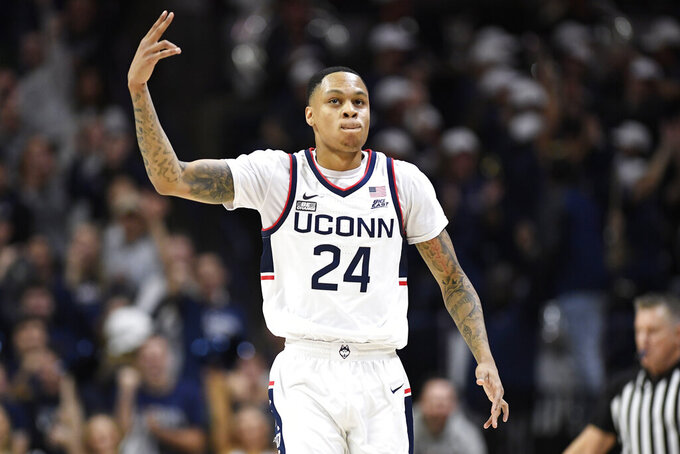 Connecticut's Jordan Hawkins (24) reacts after making a basket in the first half of an NCAA college basketball game against Oklahoma State, Thursday, Dec. 1, 2022, in Storrs, Conn. (AP Photo/Jessica Hill)

“I just caught fire early and my teammates did a great job getting me the ball,” Hawkins said. “Everything felt like it was going in.”

It was the smallest margin of victory for UConn so far this season. The Huskies’ next closest was an 82-67 win over then-No. 18 Alabama last Friday at the Phil Knight Invitational in Portland, Oregon.

“I don’t know if eight is high enough for this team, I mean their ranking,” OSU coach Mike Boynton Jr. said. “From my view, for whatever it’s worth, (UConn) is capable of winning a national championship.

“They have done a tremendous job here and had an electric atmosphere.”

Hawkins, a sophomore, had 18 points at the half as UConn dominated the final eight minutes to build a 48-31 lead.

“Obviously, our spurt-ability was on display with the shooting,” UConn coach Dan Hurley said.

UConn responded with a 15-0 run, including eight points from the foul line, over the next 4:27. The Huskies dominated at the foul line, hitting 15 of 19 in the half compared to OSU’s 4-for-4.

The Cowboys were saddled with first-half foul trouble. Starting center Moussa Cisse picked up his second at 17:42 and exited. Five players had at least two fouls at he break.

The Cowboys didn’t cut the deficit under double digits until the final minute of the game. OSU had a 33-26 scoring advantage in the second half.

“The end result was kind of what we expected, having to close the game out against a very good team,” Hurley said.

The Cowboys played their highest-ranked opponent since losing to No. 7 Baylor last season on Feb. 21. OSU is 1-4 against top-10 opponents since the start of last season.

Jackson made his first start of the season for the Huskies and wasted no time firing up the crowd. The junior guard slammed home an alley-oop pass from Tristen Newton for the team’s first basket.

UConn scored 27 points off 17 OSU turnovers. The Huskies picked up 17 of those points in the first half. The Cowboys had eight points on seven UConn giveaways.

“When knew they were coming to us, so this was a big win for us,” Sanogo said. “They thought they had a chance to win the game tonight — they did not.”

UConn: At Florida on Wednesday for its first true road game.