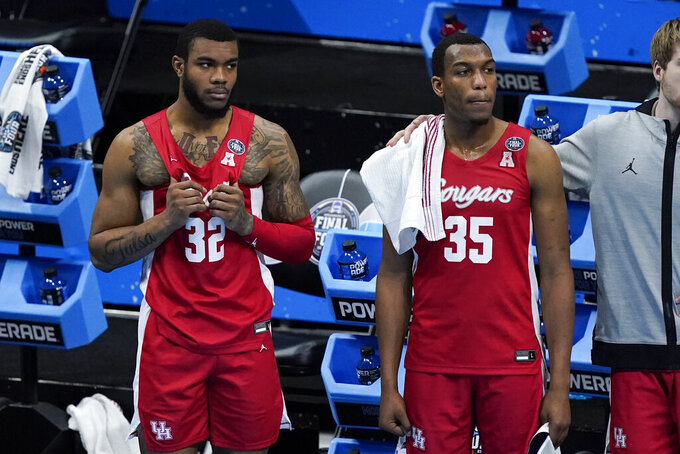 INDIANAPOLIS (AP) — DeJon Jarreau made his way to Kelvin Sampson as he checked out for the final time and gave his coach a long hug.

Quentin Grimes followed a short time later, and both ended up huddled with teammates in tears at the end of the bench as the final seconds of Houston's season ticked away.

It was a brutal finish to the Cougars' first Final Four run in nearly four decades, a 78-59 loss to Baylor in Saturday's national semifinals. It wasn't just the loss, it was the way they lost — with the tough defense and relentless rebounding that had been the most essential elements in Sampson's rebuild faltering on college basketball's biggest stage.

“The locker room is really emotional,” Sampson said. “Those guys invested a lot in this. But we ran into a really good team tonight. Didn’t play well and that team we played had a lot to do with it.”

Houston (28-4) had been holding teams to 55.8 points and 39% shooting through four NCAA Tournament games while also out-rebounding opponents by more than nine per game. The Cougars had shut down Syracuse’s hot-shooting Buddy Boeheim and Ethan Thompson of Oregon State, and no opponent had scored more than 61 points.

The Cougars found themselves up against a completely different challenge with Baylor and its elite guards and its wealth of 3-point shooters. And they struggled to keep up.

Baylor finished shooting 53% and made 11 of 24 3-pointers, with Jared Butler leading an attack that moved the ball and got plenty of clean looks while keeping the Cougars’ physical defense on its heels.

That was particularly true in the first half, with Baylor assisting on 12 of 16 baskets and hitting eight 3-pointers — more than the Cougars had allowed in any NCAA Tournament game so far.

It was an uncharacteristic look considering how Jarreau practically glued himself to Boeheim's hip in the Sweet 16 followed by Thompson in the Elite Eight.

Perhaps more frustrating was the way the Bears kept the Cougars off the glass.

Houston entered as one of the nation's best in rebounding margin and had been outrebounded three times all season. But the Bears claimed a 33-28 edge while nearly all of the Cougars' second-chance points — a key piece of their regional final win against the Beavers — came after Baylor had gone up 25 by halftime.

For a team that doesn't shoot the ball particularly well, the inability to offset that by snagging misses to get extra looks was particularly damaging.

“You look at halftime and we've got two high-level rebounding guards in Grimes and Jarreau," Sampson said. “At halftime, they had the same amount as I did. Zero. That's a problem. When our guards aren't rebounding, we're going to struggle.”

The only highlight was sophomore Marcus Sasser’s team-carrying offensive performance in that opening half, with him scoring 17 of the team's 20 first-half points while the rest of his teammates went 1 of 15 from the floor.

“That was a good team so we were going shot for shot,” said Sasser, who finished with 20. "And that wasn’t going to win it. We had to get stops. It was just unfortunate we couldn’t do that."

The Cougars were in the Final Four for the first time since 1984 amid the “Phi Slama Jama” days. Sampson is eager to see what next year's team can do to build on this breakthrough run with key players like Sasser, Tramon Mark and Fabian White Jr. returning while the team likely adds transfer help.

It's why Sampson was clear: “We'll be back. We'll be good again next year."

“But this team will never be forgotten. The broke the ground. they showed it can be done. Now it's up to these ensuing teams to stake their ground, too. Looking forward to it.”