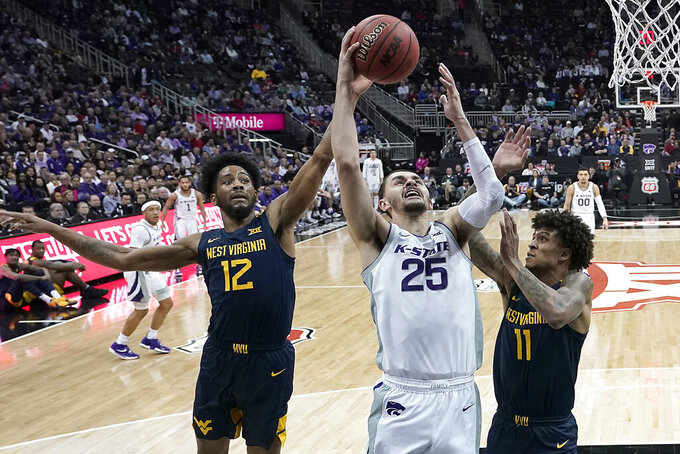 Kansas State forward Ismael Massoud (25) shoots under pressure from West Virginia forward Jalen Bridges (11) and guard Taz Sherman (12) during the first half of an NCAA college basketball game in the first round of the Big 12 Conference tournament in Kansas City, Mo., Wednesday, March 9, 2022. (AP Photo/Charlie Riedel)

KANSAS CITY, Mo. (AP) — Kansas State hired Jerome Tang to be its next basketball coach Monday, entrusting a program that's had plenty of recent success but fallen on hard times to one of the architects of Baylor's rise to national prominence.

The Wildcats hired Tang to replace Bruce Weber two days after the top-seeded Bears were eliminated from the NCAA Tournament by North Carolina in overtime. Kansas State athletic director Gene Taylor flew to Texas to meet with Tang on Sunday and the two sides finalized a six-year contract that will pay more than $14 million the next morning.

“I am beyond excited to be the next head basketball coach at Kansas State,” Tang said. “Having the opportunity to build on a program with a rich basketball history at a prestigious university is truly a blessing. We look forward to bringing an exciting style of basketball to K-State while helping our student-athletes succeed on the court and in life.”

Tang will be paid $2.1 million in his first season with a $100,000 increase in base salary each of the next five years, making his compensation $2.6 million for the 2027-28 season. His contract is expected to include several incentives, too.

“As we conducted a national search to find our next head coach, we wanted to identify an individual who can lead our program to consistently high levels while maintaining the integrity that our program is known for," Taylor said. "When we first met with Jerome, he was very impressive, and that continued throughout the duration of our search.”

Tang was part of Scott Drew's initial staff at Baylor in 2003, when the program was reeling from crippling NCAA penalties that included an inability to play a nonconference schedule. Together the two built a juggernaut in Waco, an unprecedented rise that culminated last season with Baylor beating Gonzaga 86-70 in the national title game.

The Bears also won their first Big 12 title last season — their first championship in any conference in 71 years — and shared the award with Kansas this season before an early exit in the league tournament.

“Coach Tang and I have been together for 19 years, and he’s had opportunities before,” Drew said over the weekend, “but obviously each year those opportunities grow, and deservedly so. He’s done a remarkable job.”

Tang, who previously spent 10 seasons at powerhouse Heritage Christian Academy in Texas, is also known for his recruiting ability. Among those Tang brought to Baylor were Ishmael Wainright, Al Freeman and Johnathan Motley as part of his 2013 class, and Kendall Brown, Langston Love and Jeremy Sochan in last year's No. 4-ranked recruiting class.

“He's a terrific coach,” Drew said, “and there's a big reason why we've been successful: Because we have a great staff. And he's a big part of it. So when he chooses to go, I know he will do a great job — and hopefully we won't have to play him."

It appears Drew won't get his wish in that respect.

Drew's coaching tree is quickly becoming one of the most impressive in basketball. Matt Driscoll is in his 13th season at North Florida and has been to the NCAA Tournament; Grant McCasland took North Texas to the tourney last year and was thought to be in the running for the Kansas State job; and Paul Mills took Oral Roberts to the Sweet 16 last season.

The Wildcats would welcome that kind of success the way the past few years have gone.

Weber resigned under pressure after three straight losing seasons, capped by a loss to West Virginia on the opening night of the Big 12 Tournament. All the goodwill earned over five NCAA Tournament trips and an Elite Eight was gone amid a 34-58 overall record and 13-41 mark in conference play the past three years.

Yet if nothing else, Weber underscored that it's possible to win in Manhattan, where there is no fertile recruiting base and the nearest major city — and major airport — is a 2-hour car trip down Interstate 70.

The Wildcats won a share of the Big 12 title in 2013 with a team that Weber largely inherited from Frank Martin, then they did again in 2019 with a team of his own construction. They also have appeared in nine NCAA tournaments since 2008, the year Martin ended a 12-year-long drought by taking Kansas State to the second round.

Martin also had the Wildcats in the Elite Eight in 2010 during four NCAA tourney trips in his five seasons.