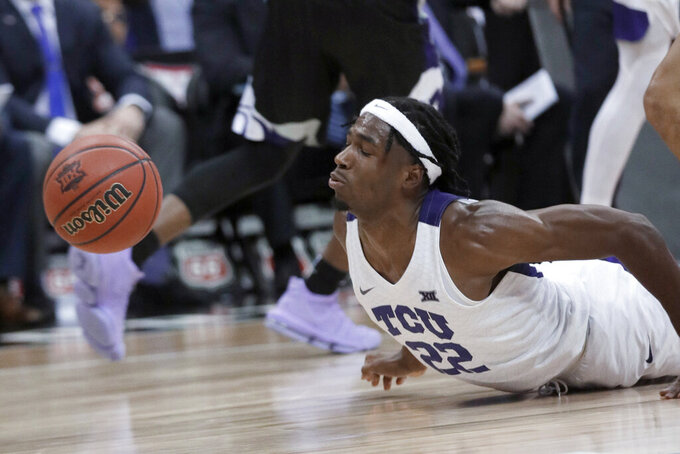 TCU guard RJ Nembhard loses the ball out of bounds during the second half of the team's NCAA college basketball game against Kansas State in the first round of the Big 12 men's tournament in Kansas City, Mo., Wednesday, March 11, 2020. Kansas State won 53-49. (AP Photo/Orlin Wagner) 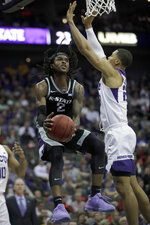 The Wildcats have now put together back-to-back wins after beating Iowa State on Saturday, and TCU 53-49 on Wednesday night in the first round of the Big 12 Tournament.

Nembhard missed a go-ahead 3 with five seconds remaining. “All you can do is get the best shot you can and I thought it was a pretty good shot,” TCU coach Jamie Dixon said.

McGuirl followed with a pair of free throws with two seconds left.

“We get to fight another day,” Kansas State coach Bruce Weber said. “We finally found a way to win a game like this.”

David Sloan added nine points and Xavier Sneed had eight for Kansas State, which shot 21 of 54 (39%) from the field while the Horned Frogs were 20-of-50 shooting (40%). The Wildcats also had a 36-27 rebounding advantage, and held the lead for 35 minutes.

The Horned Frogs got their first lead of the game, 46-45 with five minutes left, on a floater by Nembhard. Kevin Samuel's free throw and jumper stretched TCU's advantage to 49-45.

But the Horned Frogs didn’t score in the final three minutes of the game and finished with 14 turnovers. “We made bad decisions with the ball and we’ve been a high-turnover team all season,” Dixon said.

Sneed, McGuirl and Mawien made a basket apiece and the Wildcats regained the lead 51-49 with 1:19 to play.

Big 12 commissioner Bob Bowlsby announced 30 minutes before the start of the Iowa State-Oklahoma State game in the opener that the league would not allow fans at any games after Wednesday night. The only people in attendance for the rest of the tournament will be teams, family members and essential staff. Each team will get 125 tickets to hand out on a game-by-game basis.

Kansas State coach Bruce Weber said cancelling games might be the best for everyone involved in the country.

“This is scary and I’m old,” Weber said. “I’m in the group where people die and I have a grandson coming any day now.”

TCU: The Horned Frogs started slowly, but caught fire in the second half (13-of-28 shooting from the field that included four 3-pointers). It wasn’t enough though as their season came to an end.

Kansas State: Coming off a 79-63 win against Iowa State on Saturday, the Wildcats used that momentum to beat TCU. But in order to win the next one against second-ranked Baylor, they’ll have to play much better.

TCU’s season is over.