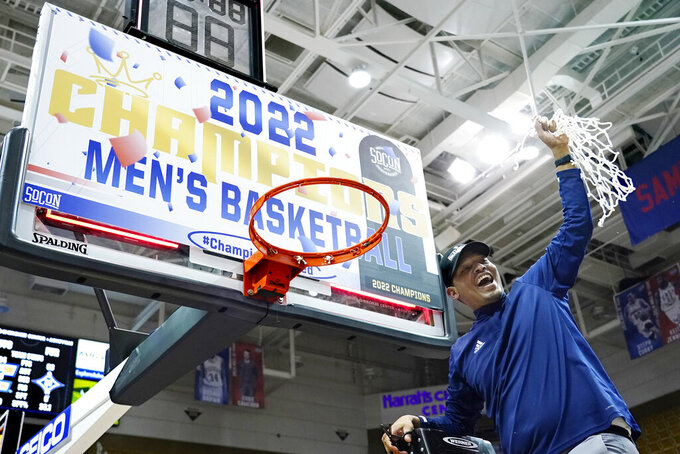 Lamont Paris believes he's the perfect coach to bring South Carolina back to the NCAA Tournament. And he plans to do it in a hurry.

Paris' was hired Thursday, given a five-year deal worth $12 million and a mandate to take the Gamecocks to the Big Dance, where they've been just twice since 1998.

In his introduction at his new home building, Paris thanked athletic director Ray Tanner and administrators “for recognizing greatness when they see it.”

Paris broke out in loud laughter, “I mean, what else am I supposed to say?”

Paris doesn’t believe getting South Carolina to the NCAAs is a long-term project.

“I know we’ve been to nine NCAA Tournaments in this school’s history,” he said. “I would like to add to that at a fast rate.”

The university's board of trustees approved the contract earlier Thursday. Paris will make $2.2 million his first season with a built-in raise of $100,000 each year after that.

Paris, 47, takes over for Frank Martin, who was fired earlier this month after 10 seasons and one memorable NCAA appearance — the team made a run to the Final Four in 2017.

“Lamont Paris is the right choice to lead our men’s basketball program,” Tanner, the school's AD, said in a statement.

He's coming off the high point of his five seasons at Chattanooga. The Mocs finished 27-8 this year and won the Southern Conference regular season and tournament championships.

Paris' team took fourth-seeded Illinois down the wire in the NCAA Tournament's opening round before falling 54-53 last week.

Tanner said he was seeking a coach with a winning history and energy, passion and commitment to excellence in all areas.

“Coach Paris checks all of those boxes,” Tanner said.

Paris was among several candidates South Carolina talked to.

A person familiar with the weeklong coaching search said the Gamecocks also interviewed former Arizona coach Sean Miller, who decided to return to coach at his old school, Xavier; Murray State coach Matt McMahon, now at LSU; and Dennis Gates of Cleveland State, who landed at Missouri. The person spoke to The Associated Press on condition of anonymity because details of the search have not been publicly released.

The deal includes a buyout where Paris would owe South Carolina $5 million if he chose to leave in the first year. That amount shrinks each season until a $500,000 buyout in the final contract year. If South Carolina fires Paris while he's under contract, it would pay him 65% of his remaining salary.

Paris was an assistant at Wisconsin for seven years under Bo Ryan and Greg Gard before moving to Chattanooga after the 2016-17 season.

Paris will likely have his hands full managing a roster in flux after the Gamecocks went 18-13 this seaosn. Erik Stevenson, the team's second-leading scorer at 11.4 points per game, has entered the transfer portal. Leading scorer Jermaine Couisnard (12.2 points) is weighing whether to return to explore his pro options after declaring for the NBA draft a year ago.

Paris spoke with the Gamecocks earlier Thursday and plans to have individual player meetings soon.

“Some guys are not going to like me. Some guys are going to get a chance to know me and say, ‘Whoa, this is a fresh start. I could really thrive in this system,’" he said.