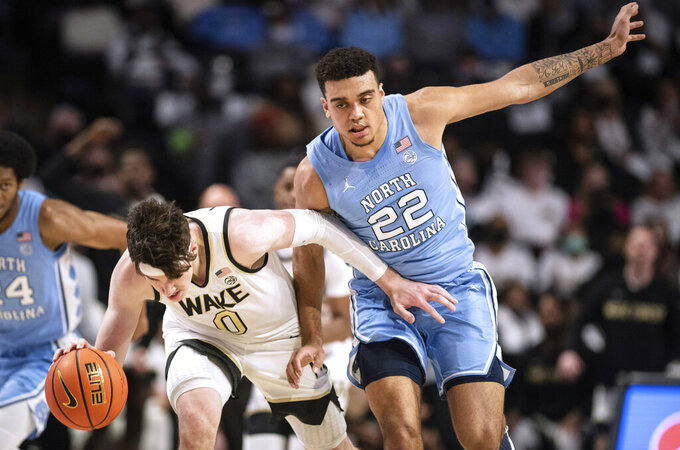 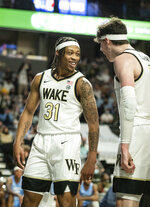 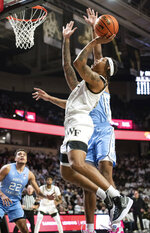 LaRavia made 12 of 15 from the free-throw line and finished with four assists and three steals. Alondes Williams had 20 points and tied his career high with three blocks and Daivien Williamson scored 19 points on 7-of-9 shooting for Wake Forest (16-4, 6-3 ACC).

Williamson scored the first seven points and added a 3-pointer in a 20-5 run that gave Wake Forest a 41-28 lead when Williams hit a 3 with 3:19 left in the first half and the Tar Heels never again threatened.

Williams went into the game as the conference's leader is both scoring (20.3 per game) and assists (5.16) — something no player has done for an entire season since assists have been counted beginning in 1973 — while shooting 54.5% (No. 4 in the ACC) from the field this season.

Wake Forest has won five of six and three in a row, including landmark road wins at Virginia (63-55) and Georgia Tech (80-64), the team’s first victories in Charlottesville and Atlanta since 2010 and 2004, respectively. The Demon Deacons — picked in the preseason to finish 13th in the 15-team ACC — are a half-game out of first in the conference standings.

The Tar Heels, who allowed 30 points off their 14 turnovers is an 85-57 loss at Miami last Tuesday, committed just 11 turnovers on Saturday but Wake Forest converted those miscues in 21 points.

Damari Monsanto hit three 3-pointers in a 58-second span 71-52 lead with 11:50 to play. Monsanto, a transfer from East Tennessee State playing in his second game for the Demon Deacons, finished with 13 points five rebounds and three steals in 20 minutes. The Southern Conference freshman of the year last season was expected to miss this season while recovering from Achilles surgery in June.

Manek and Williams were teammates last season at Oklahoma.