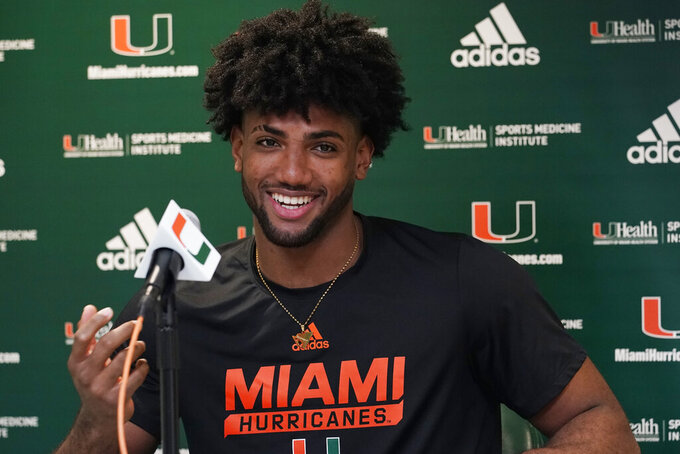 CORAL GABLES, Fla. (AP) — Absolutely nothing was expected of Miami last season, as evidenced by the Hurricanes being picked to finish 12th in the Atlantic Coast Conference.

They ended up in the Elite Eight.

Being widely dismissed as not very good worked in Miami’s favor last season, but the Hurricanes won’t be able to use snubs as fuel entering this season. After a 26-win season and getting within a game of the Final Four last March, big things are expected from Miami — the No. 4 pick in the ACC preseason poll.

The Hurricanes started 4-3 last season, then went 9-0 from Dec. 1 through Jan. 8 and kept that momentum going the rest of the way.

“This year, I don’t know how long it will take,” Miami coach Jim Larrañaga said. “But the guys are working really hard. We have six new players out of 13 scholarship players, so half the team is new. And they’re making great progress.”

“I always wanted to play for Miami,” said Omier, who played a year of high school ball at Miami Prep. “Making the dream come true, I can’t even explain it.”

“There’s a lot of talent on the team,” Omier said. “You’ve got to bring your best every day.”

Miami got the 28th-most votes in the preseason AP Top 25, putting the Hurricanes on the brink of being ranked for the first time since the final poll of the 2017-18 season.

The last AP poll of each season is taken before the NCAA Tournament, so the Hurricanes’ run to a regional final — they were eliminated by eventual national champion Kansas — was too late to sway voters.

Larrañaga got his first win of the season in a game that wouldn’t count and sounded like a bit of a forfeit.

Even now at 73, he remains an exceptional free throw shooter. And he handed out a free lesson during the preseason.

“In my most recent free-throw challenge, one of my freshmen, Danilo Jovanovich, wanted to compete and I needed to warm up, so I warmed up and made 39 straight free throws,” Larrañaga said. “And then he decided that we weren’t going to have a competition.”

Jovanovich is one of four key freshman recruits for Miami this season. He hails from Whitnall High in Wisconsin — the same school that produced Miami Heat guard Tyler Herro.

Wong has considered leaving for the NBA after each of the last two seasons, only to return to Miami.

Larrañaga enters this season four wins away from 700 in his career. He has gotten 226 of those wins at Miami, six more than any other coach in Hurricanes’ men’s basketball history.

Miami opens Nov. 7 against Lafayette. Other highlights: a Nov. 30 home game against Rutgers in the ACC-Big Ten Challenge; the ACC opener at Louisville on Dec. 4; a Dec. 28 game against traditional mid-major power Vermont; a visit from Jim Boeheim and Syracuse on Jan. 16; a pair of matchups with Duke (at Durham on Jan. 21, in Coral Gables on Feb. 6); and a trip to face North Carolina on Feb. 13.