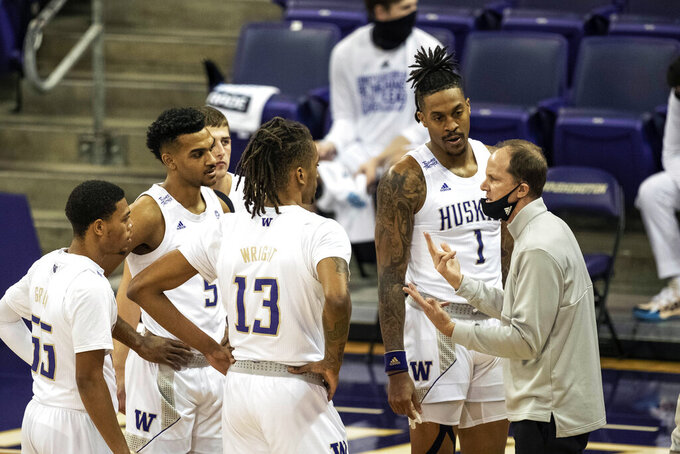 Washington coach Mike Hopkins calls his team together during a timeout as the Huskies struggled with Montana in the first half of an NCAA college basketball game, Wednesday, Dec. 16, 2020, at Alaska Airlines Arena in Seattle. (Dean Rutz/The Seattle Times via AP)

SEATTLE (AP) — Travis DeCuire got the best of Washington when he was a player at Montana in the early 1990s.

Now he's done it as the Grizzlies' head coach.

“It's hard to explain. I go in the locker room and I don’t even really have a postgame speech,” DeCuire said. “So many guys did things that we needed to win.”

Kyle Owens scored 13 points despite struggling with his shot, Josh Vazquez scored seven of his 12 points in the final 3½ minutes, and Montana stunned Washington 66-58 on Wednesday night.

Montana (2-4) finished with five players in double figures. Owens was just 4-of-18 shooting, but had plenty of help. Josh Bannan had 12 points, Michael Steadman added 11 and Brandon Whitney scored 10.

For DeCuire, a Seattle-area native, it was an extra sweet victory.

“When you’ve got guys that you have known since you were single digits in age texting you saying, ‘This one is yours, go get it,’ it’s huge to go get it,” DeCuire said.

Nate Pryor and Nate Roberts each scored 13 points to lead Washington (1-5), but the Huskies could not overcome an awful first half where they trailed 33-21 at the break. Riley Sorn added 10 points all in the second half for the Huskies, but the biggest problem was a quiet night from leading scorer Quade Green.

Green, who was averaging 17 points per game, finished with just four points on 1-of-11 shooting and fouled out in the closing seconds.

It was a significant step back for the Huskies after nearly knocking off Oregon last weekend.

“It was more so how we started,” Washington coach Mike Hopkins said. “You've got to come out and play like it’s your last game and we didn’t do that. That’s what was frustrating most for me.”

Despite trailing much of the night, Washington took its first lead since it was 5-4 on Jamal Bey’s free throw with 4:26 left. Green’s two free throws with 3:50 left gave the Huskies a 53-51 lead, but that’s when Montana took over.

Vazquez knocked down his second 3-pointer of the game to put the Grizzlies back in front. He added a pair of free throws after Hameir Wright missed a pair for Washington and after another empty trip by the Huskies, Whitney’s 3 put the Grizzlies in front 59-53 with 2:12 left. Vazquez added another basket for a 61-53 lead and the Grizzlies made enough free throws in the closing minutes.

“That was one heck of a team effort. Sometimes a game that looks like you might have a chance to pull away gets ugly and you've got to be tough enough to finish it," DeCuire said.

Washington finished just 8 of 19 at the free throw line and missed all five 3-point attempts in the second half.

Montana: The Grizzlies continued their strong recent run of free throw shooting. Montana was 22 of 27 at the line. Montana shot just 58% at the line in its first two games.

Washington: The Huskies desperately need to find a scoring punch to go along with Green. Roberts was the only starter to score in double figures and Washington’s three other starters combined for just 10 points.

Washington: The Huskies face Colorado in a non-conference game on Sunday in Las Vegas.