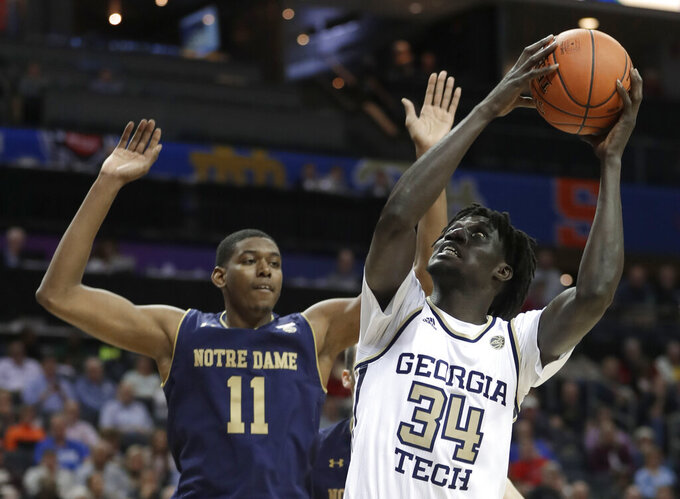 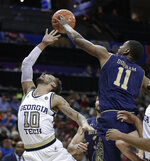 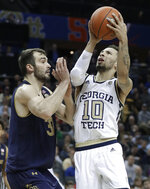 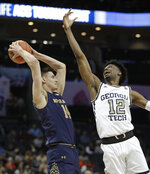 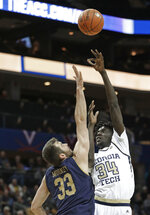 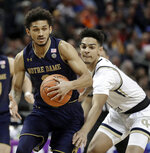 CHARLOTTE, N.C. (AP) — Notre Dame coach Mike Brey has been waiting all season for his team to figure out how to make a big plays in clutch situations.

He finally got it Tuesday — on the biggest stage of the season.

John Mooney made a key 15-footer in the final minute as the shot clock was winding down to make it a two-possession game as Notre Dame held on to beat Georgia Tech 78-71 in the first round of the ACC Tournament to snap a seven-game losing streak.

Mooney finished with 20 points and 10 rebounds and Dane Goodwin added 15 points for the Irish, who nearly squandered a 20-point halftime lead.

"We have been in search of that big play," Brey said. "We have played people close in this league but we have not been able to get over the hump with a big offensive possession."

Brey praised Mooney for his effort this season saying he's not sure how the 6-foot-9, 243-pound power forward has any energy left at all.

"We have rode him so hard and he just goes double-double against unbelievably athletic front lines night after night," Brey said.

It was Mooney's 20th double-double of the season, coming days after he was named third-team All-Conference, which he called an honor.

"There's obviously some great players in this league, probably some first-round and second-round draft picks coming up in the NBA Draft, so it's awesome to be able to compete against those guys," Mooney said.

It was Notre Dame's first victory since defeating the Yellow Jackets 69-59 in South Bend, Indiana, on Feb. 10 and only their fourth win of the calendar year.

The Irish (14-18) didn't play like the last place team in the ACC in the first half, shooting 58 percent from the field to build a 52-32 lead over the 10th-seeded Yellow Jackets.

Georgia Tech picked up the intensity with full-court pressure in the second half and cut the Irish lead to six with 1:56 remaining on a 3-pointer from the left wing by Jose Alvarado. After an Irish miss, Moore sank a 3 from the right corner and the lead was suddenly down to 72-69 with 1:06 remaining.

But Mooney didn't panic, calmly drilling a 15-footer as the shot clock was winding down. Prentiss Hubb then sank two free throws after a Georgia Tech miss to put the Irish safely up by seven with 32 seconds left.

Michael Devoe cut the lead to five on a layup, but Juwan Durham blocked Devoe on the next possession to help seal the win.

Georgia Tech was fifth in the country in 3-point defense, but Notre Dame blistered them by hitting 8 of 14 from beyond the arc, including 7 of 11 in the first half.

"They shot the daylights out of it the first half," Georgia Tech coach Josh Pastner said. "We were just on our heels, in a sense, and they were just making those 3s."

"Jose had a tough game and in this league your guard play has to be good every time you step on the floor," Pastner said. "... Jose didn't play his best, and obviously that was a struggle for us."

Notre Dame: Nate Laszewski had 14 points on the 3-pointers for the Irish before leaving late in the first half with a lower back bruise after landing hard on the floor. He left after a collision with Georgia Tech's Brandon Alston under the basket. Laszewski remained on the court for several minutes before being helped to the locker room by trainers. X-rays on his back were negative, but he didn't return. Brey didn't sound optimistic about Laszewski's chances of playing in the second round against Louisville. "We'll try and get him loose for tomorrow, but the group that played pretty much the whole second half may be the group we have to play," Brey said.

Georgia Tech: It was a tough ending to a tough season for the Yellow Jackets, who won only six ACC games during the regular season. But the core of the team is returning next season so they should only be better next year.

Notre Dame: Faces seventh-seeded Louisville on Wednesday night. The Irish lost 75-61 to the Cardinals on March 3.