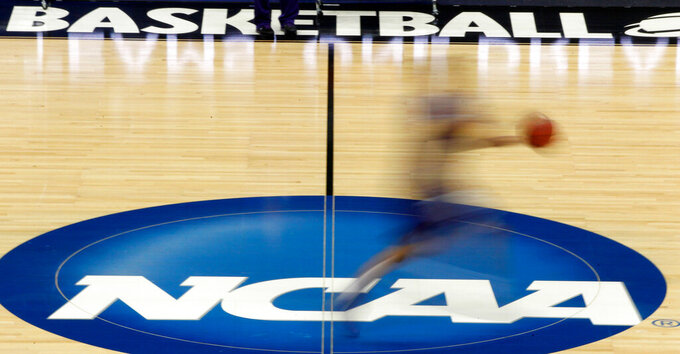 FILE - In this March 14, 2012, file photo, a player runs across the NCAA logo during practice in Pittsburgh before an NCAA tournament college basketball game. The number of teams facing postseason bans because of low scores on the NCAA's Academic Progress Rate has nearly doubled in one year. Fifteen teams could face the most severe sanction next season compared with eight in 2019-20. (AP Photo/Keith Srakocic, File)

INDIANAPOLIS (AP) — The number of teams facing postseason bans because of low scores on the NCAA’s Academic Progress Rate has nearly doubled in one year.

Fifteen teams face the most severe sanction next season or the season after compared with eight in 2019-20. Stephen F. Austin and Alabama A&M each had three teams on the list released Tuesday.

Any teams posting a four-year score below 930, which predicts about a 50% graduation rate, can be penalized. Scores are based on academic eligibility, graduation and retention. Each athlete receives one point per semester if they remain academically eligible and another if they graduate or return to school for the next term.

The men’s basketball team at Stephen F. Austin posted the worst score of any Division I team, an 810, while the Lumberjacks’ football program finished with an 894. Both programs, along with the school’s baseball team now face postseason bans.

Ryan Ivey, the school’s athletic director, declined to comment ahead of a news conference later Wednesday.

Alabama A&M’s men’s track and field team posted the second-lowest score in the nation, 866, and will be prohibited from postseason play along with its men’s basketball and women’s soccer teams. Athletic director Kenyatta Walker, however, cited improving single-year scores as well as better marks in other sports as examples of progress the school’s athletes have made in the classroom.

“Our student-athletes have been resilient and have risen to the occasion,” Walker said. “We are excited to see the continued improvement in our athletic department’s APR scores, this is a true testament to the commitment and excellence from our student-athletes, the academic support staff and coaches.”

Of the 23 teams facing penalties, which can include reductions in practice time and games played, 18 are from historically black colleges and universities. The other five: Chicago State’s men’s basketball program, McNeese State’s football program and the three teams from Stephen F. Austin.

Those schools could elect to delay the penalty by one year following last week’s vote by the Division I committee on academics.

Howard and Prairie View A&M will be ineligible in football while Delaware State and Alabama State face tourney bans in men’s basketball.

“The current state of our men’s basketball program as it pertains to APR has been difficult for all parties involved,” Alabama State athletics director Jennifer Lynne Williams said. “The staff of ASU’s department of intercollegiate athletics is particularly saddened for our student-athletes. Their complete student-athlete experience is what we value most, and to have an obstacle such as this one impede on their experience is extremely disappointing.”

All of this comes at a time the NCAA’s numbers reveal a rather stable academic picture: Athletes posted an overall score of 983 for the third consecutive year.

When broken down by sport, things didn’t change much, either. Baseball and women’s basketball teams each improved by one point, to 977 and 983, respectively, while football maintained last year’s score of 977. Men’s basketball dropped one point to 966.

And for the first time, schools will see an economic payoff from classroom success.

The NCAA will distributing money to schools that post an all-sport, single-year score of 985 or higher; that have a Graduation Success Rate of 90% or higher; or produce a federal graduation rate among athletes that tops the federal average of non-athletes by at least 13 percentage points.

The Division I board of directors said it will not announce which schools receive the payout but acknowledged the dollar amounts were impacted by the cancellation of the men’s basketball tournament.

“The sustained academic achievement of Division I student-athletes is nothing short of remarkable,” NCAA President Mark Emmert said in a statement. “Their hard work in the classroom is just as evident as their efforts on the field. Their success is something to be celebrated.”