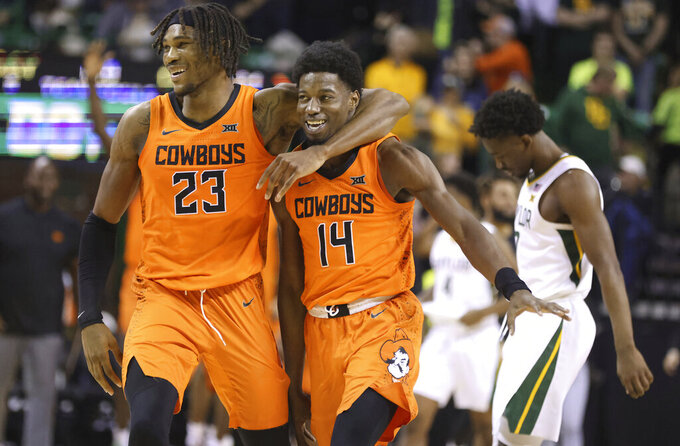 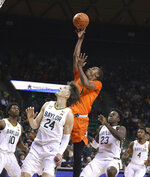 WACO, Texas (AP) — Bryce Thompson and Oklahoma State completed quite a journey to beat a No. 1 team on the road for the first time in school history. They also gave Baylor consecutive home losses.

Thompson scored the game's final six points and finished with 19 as the Cowboys, in their third Big 12 road game in five days while traveling more than 3,200 miles, beat Baylor 61-54 on Saturday.

“It’s been one heck of a week in terms of what we’ve had to face competition-wise and travel-wise,” Oklahoma State coach Mike Boynton said. “But for those guys to show the resilience, and the determination and courage to come out and play with the amount of energy that was required ... If we play with any little less energy, we lose the game.”

The Cowboys (9-7, 2-3 Big 12) began their week with a 10-point loss at West Virginia on Tuesday, then two nights later lost 78-57 at Texas Tech, after the Red Raiders had just beaten Baylor at the Ferrell Center.

“It just feels like justice. We’ve been through some stuff this week on the road for a week straight,” sophomore forward Tyreek Smith said. “It just feels good to get a win.”

“They’re not very happy,” Bears senior Matthew Mayer said when asked the mood of the coaches.

“We dug ourselves in a big hole. ... If the hole wasn’t that big, then we would have been able to win the game,” said Cryer, who had 18 points and didn't sense any hangover from the loss to Tech. “I felt like that had nothing to do with this loss.”

Thompson made two free throws with 26 seconds left, then Bears guard Adam Flagler had turnovers on consecutive possessions — losing the ball out of bounds on a drive to the basket, then a bad pass. Thompson was fouled making the steal, then hit two more free throws before a game-capping breakaway dunk after Baylor missed its last shot.

Baylor had won a national-best 21 games in a row before losing Tuesday to Texas Tech. The reigning national and Big 12 champions led for only 16 seconds against Oklahoma State.

The only time the Cowboys trailed was after Kendall Brown’s basket that made it 4-3 only 2 1/2 minutes into the game. The Bears then missed 10 shots in a row over a span of more than six minutes before Cryer’s 3-pointer from the top of the key.

Oklahoma State followed with another 12-2 run and had its biggest lead at 29-11 when Isaac Likekele made a short floater off the glass. There was one possession in that stretch when Baylor didn’t even get a shot off before the 30-second shot clock expired, but there was no whistle when Rondel Walker had a steal and passed to Keylan Boone for a breakaway layup.

Baylor hadn't had consecutive losses since the last three regular-season games of the 2018-19 season and its Big 12 tournament opener.

Mayer had season-high 16 points as the Bears shot a season-low 31% (18 of 58). Their 22 points before halftime were their fewest in a half this season, and the 57 points overall were also a season low.

Oklahoma State: Thompson was the only player in double figures for the Cowboys, but all nine players who got into the game had at least nine points, and eight of them had multiple rebounds. ... Oklahoma State's game at Texas Tech was the makeup of a Jan. 1 game postponed because of COVID-19 issues in the Cowboys program.

Baylor: Already short-handed with forward Jeremy Sochan sitting for the second game in a row after turning his left ankle last weekend, leading scorer James Akinjo didn't play the final 9:49. Akinjo came down hard on his rear end against Texas Tech, and is still sore from that. He did play 23 minutes, making only 1 of his 8 shots.

After five consecutive weeks at No. 1, the last three unanimously, Baylor should still extend a school record with their 40th consecutive poll in the Top 10 when the new poll.

Baylor: At West Virginia on Tuesday.