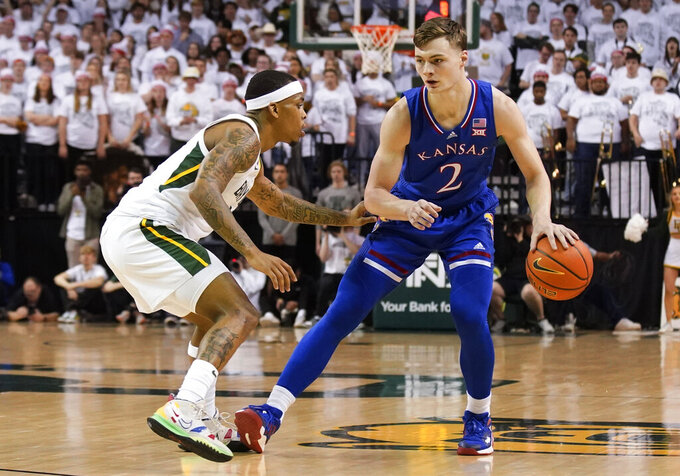 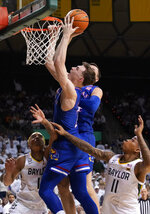 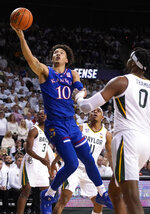 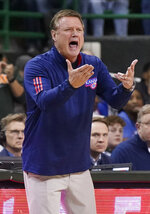 WACO, Texas (AP) — Jeremy Sochan and his teammates kept encouraging each other after 10th-ranked Baylor got down big early again against No. 5 Kansas, only three weeks after an embarrassing loss to the Jayhawks. The Bears then started making big impact plays.

Sochan had a block that led to a layup by Adam Flagler right after his two-handed slam dunk in a big run before halftime, and the Bears finally took the lead after the break in an 80-70 victory aturday night that kept the Jayhawks from wrapping up a share of their 20th Big 12 title.

“They were the aggressor in the first game and in the first six minutes this time,” Sochan said. “But we matched their mentality and their strength and just beat them.”

Kansas (23-5, 12-3) had their four-game winning streak snapped and missed a chance to lay claim to another Big 12 title. They still have three games left, including a game postponed from Jan. 1.

“You play a top-10 team on the road, it was a missed opportunity because we had payed so well early” Kansas coach Bill Self said. "I didn’t go into the game thinking that this was going to be a great opportunity. I went in the game knowing that you had to play really well in order to win, and we didn’t play well enough.”

Baylor, the defending national and Big 12 champions who lost 83-59 in Lawrence on Feb. 5, began the day tied with No. 9 Texas Tech for second place in the Big 12.

But the Red Raiders (22-7, 11-5), who swept their two games against Baylor and split with Kansas, lost 69-66 at TCU earlier Saturday. The Jayhawks play TCU twice in three days next week.

The Bears took their first lead with a blistering opening minute of the second half, with Kendall Brown blocking a shot and then running the court for a slam dunk after a long bounce pass from James Akinjo that made 33-32 and sent the record crowd of 10,628 into a frenzy.

There was then a technical foul assessed against Self, who was irate that there wasn't a foul called on a shot by Christian Braun. Self was near midcourt after the non-call, which came after the Jayhawks never went to the free throw line before halftime. James Akinjo made both free throws.

Adam Flagler added 13 points for Baylor, while Akinjo had 12. Matthew Mayer had nine points and 12 rebounds.

“I felt like our guards early on in the game tried to force some unnecessary shots,” Thamba said. “But once we started getting easies, attacking the lane and offensive rebound opportunities were there, so it was just finishes.”

Baylor was down 28-15, matching its largest deficit, before a layup by Thamba ignited a 10-0 run. The Bears were within 28-25 after Sochan blocked a shot and swatted it to Flager, drove the court and witched the ball from his left to right hand in the air for the layup.

Kansas: The Jayhawks still control their fate in trying to win the Big 12 for he 20th time in the league's 26 seasons. They won an unprecedented 14 titles in a row from 2005-18, and last won in 2020. ... Remy Martin played for the first time after missing seven games because of a bone bruise on his right knee. The super senior transfer guard hadn't played since Jan. 29 against Kentucky.

Baylor: The Bears are 10-1 vs. top-10 teams over the last two years, the lone loss being at Kansas earlier this season. This is the third consecutive season, and fourth time in five years, Baylor split the regular-season series with the Jayhawks.

Baylor will be ranked in its 54th consecutive poll when the new Top 25 comes out Monday, and will extend its top-10 streak to 46 polls in a row. Both streaks are already school records. Kansas will still be in the top 10. The top six teams in the poll lost Saturday, with Kansas the only one to do so against a top-10 opponent.

Kansas: At TCU on Tuesday night, then home against the Frogs on Thursday night in the makeup of what was supposed to be the Big 12 opener, but postponed because of COVID-19 issues in TCU's program.