No. 10 Kentucky rolls past Morehead State 81-45 in opener 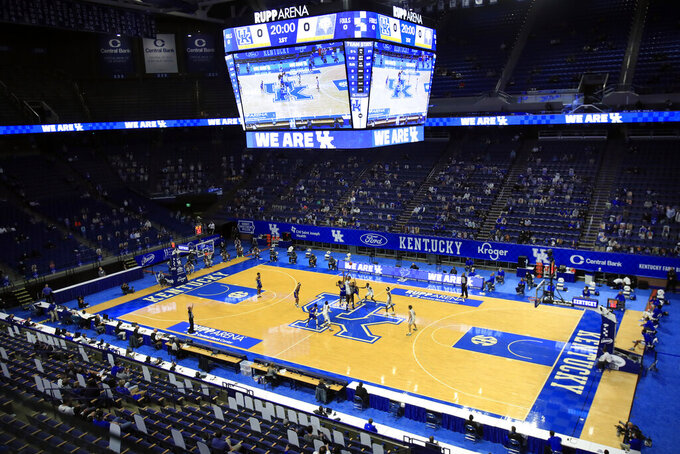 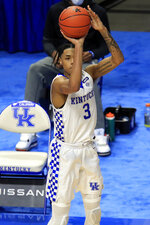 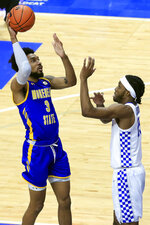 LEXINGTON, Ky. (AP) — John Calipari loved the cohesion, and it was just Kentucky's unveiling of virtually a whole new roster.

Brandon Boston Jr. had 15 points and seven rebounds, Devin Askew and Terrence Clarke each added 12 points and No. 10 Kentucky cruised past Morehead State 81-45 in the season opener Wednesday night.

Starting with more roster turnover than usual with 10 new faces, including seven freshmen and three transfers, the Wildcats were surprisingly solid in their first real action together. They never trailed and steadily built a double-digit lead that reached 34 points with about five minutes left.

There were some mistakes, but nothing is ever perfect.

“What I was encouraged about was we looked like an organized basketball team,” Calipari said. "Ten new guys, never played together, never played for me. ... Can you imagine? We’ve been 40 days, 30 practices in 42 and this is what we look like. So I’m happy now.”

Boston, a 6-foot-7 guard, was 7 of 14 from the field in his debut, and Askew and Clarke each made 5 of 9 attempts. Graduate transfer Davion Mintz added 10 points off the bench as Kentucky rolled in its first game of the Bluegrass Showcase.

“We just played as a team,” Clarke said. "Cal kind of wanted us to make the extra pass or whatever the case may be, just be unselfish.

“As organized as we looked, I think everybody was kind of anxious and just didn’t know what was going to happen. So, us going out there and performing how we did, I think that we're just going to keep on building.”

Johni Broome had 12 points and Julius Dixon 11 off the bench, while James Baker Jr. added 10 for Morehead State. The Eagles shot 34% in falling to 0-11 against the Wildcats.

“I felt like tonight we played selfishly,” Morehead State coach Preston Spradlin said, "and some of our shot selections were really in our lack of passing and sharing the ball, which is something that’s really been a calling card for our team.

“We had guys who held onto the ball too long and the result of that is when you’re not making the correct play at the right time against a team like Kentucky, they’re going to outrun their mistakes.”

Rupp Arena at tipoff felt more like the doors had just opened, with physically-distanced spectators sprinkled around the 20,500-seat facility at 15% capacity (3,075 reported attendance. Pumped-in crowd noise provided initial energy that quickly warmed up fans, some sitting next to 3-foot photo cutouts selling for at $50 and up.

On the floor, players sat on two rows of folding chairs spaced six feet away, with Calipari taking the second seat up front — though never for long. But those cutouts drew lots of attention.

“With the cutouts, I mean, it’s lovely," Clarke said. “It feels like people are there.”

Morehead State had some early juice but were overwhelmed on both ends by Kentucky’s size and quickness. That led to 20 Eagles turnovers for 20 Wildcats points, and they struggled keeping up with Kentucky’s movement on its end. The bright spot was the Eagles’ 26 points in the paint, six fewer than Kentucky, but they were close most of the night.

Kentucky started four freshmen and a senior but played like a team tired of facing each other, showing impressive chemistry despite all that youth. The Wildcats pushed the tempo and passed well, posting 18 assists on their 33 baskets. Nine players scored overall, with former Wake Forest 7-footer Olivier Sarr overcoming a slow start to finish with eight points.

Kentucky will host Richmond on Sunday.