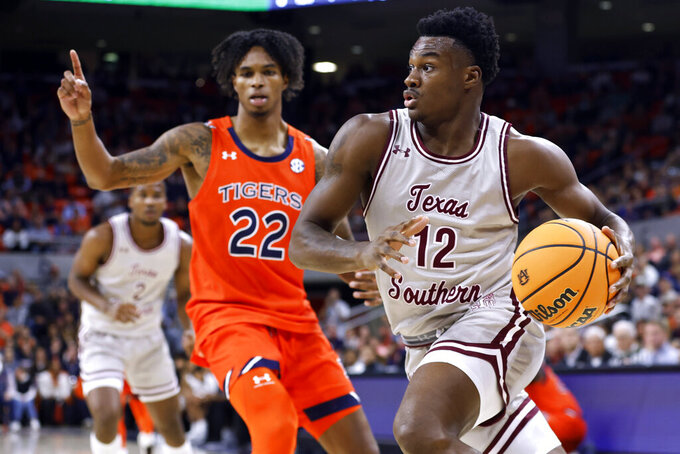 Texas Southern, which beat power conference team Arizona State earlier this week, led early in the second half before Auburn answered with a 15-2 run to retake a lead it wouldn’t relinquish.

“I told our guys, ‘Look, we need a close game. These guys are older. They’ve played Texas Tech, Houston, San Francisco — they’re not intimidated by us,‘” Auburn head coach Bruce Pearl said. “And I think that surprised our kids.”

Auburn (4-0) got off to a slow start offensively, shooting 35.5% from the field and only scoring 29 points in the first half against a tough Texas Southern defense. But Auburn’s offense came alive in the second half, with Moore scoring 11 of his 14 points and not missing a single shot.

“It was just being aggressive,” said Moore, who hadn’t scored in double figures since early last season. “I don’t know if y’all see on the sidelines, (Pearl) goes crazy when I don’t score the ball this year. ... It was just being confident, just trusting in my abilities and my coach’s belief.”

Playing its fourth game in six days, Texas Southern (1-5) was unable to keep up with a deeper and fresher Auburn team after halftime. Late in the second half, Auburn went on an 11-0 run in less than two minutes to ultimately put the game away.

The visiting Tigers were led in scoring by Joirdon Karl Nicholas’ 13 points. Davon Barnes added 12 points, while PJ Henry had 11.

“We’ve got a lot of new pieces that we’re counting on this year, and the experienced guys back are doing a fantastic job for us,” Texas Southern head coach Johnny Jones said. “To come in and play in this type of environment, I thought our young guys are really growing up and continuing to get better.”

Texas Southern: Jones’ Tigers were fearless in their matchup against another highly ranked team after their 83-48 loss to No. 3 Houston on Wednesday night. The defending SWAC champions look like they will be a physical matchup for anyone they play.

Auburn: The host Tigers missed the presence of starting center Johni Broome, who sat out Friday night with a bone bruise he suffered earlier in the week in a win against Winthrop. Without Broome, Auburn was unable to get a consistent offense going and didn’t enjoy its usual paint advantage from the first three games of the season.

Johnson started all but three games for Auburn last season, but he has come off the bench in all four of the Tigers’ contests to start this season.

That hasn’t seemed to bother the energetic junior guard, who scored eight of Auburn’s first 12 points and had another eight-point surge after halftime to lead all scorers.

“He was intense, he was aggressive, but he was under control,” Pearl said. “He did it with purpose. And he’s been working really hard to do that.”

Auburn was just the latest of several big-name opponents Texas Southern has played in the first two weeks of the season. Texas Southern isn’t done with the tough tests yet, as it travels to Kansas next Monday night and will play Wichita State before SWAC play begins in January.

“It helps us down the stretch,” Jones said. “We have a tough conference, but playing in these tough environments — our guys enjoy it. ... A lot of growth can come from this.”

Texas Southern stays in the state of Alabama and visits Samford on Sunday.

Auburn plays its first game away from home Tuesday, when it faces Bradley in Cancun, Mexico.