No. 21 Oregon's defense an emphasis heading into season 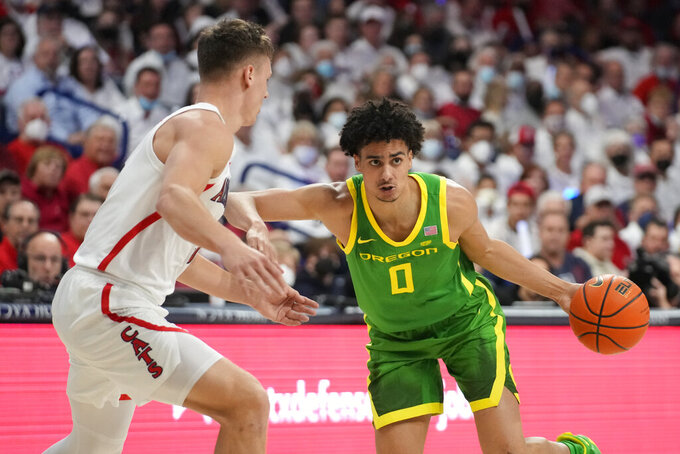 FILE - Oregon guard Will Richardson (0) drives against Arizona guard Pelle Larsson, left, during the first half of an NCAA college basketball game Feb. 19, 2022, in Tucson, Ariz. Streaky-shooting guard Richardson is back and expected to take on a leadership role. (AP Photo/Rick Scuteri, File)

Oregon got away from its defensive discipline and rebounding last season, so that's the focus of this season's Ducks.

And indeed, one of the team's areas for improvement was defense. The Ducks gave up an average of 69.7 points per game last season, ranking them ninth in the Pac-12 for points allowed. They were 10th in defensive rebounds per game.

The Ducks scored 5-star prospect Kel’el Ware, a 7-foot center from Arkansas, and brought in transfers Jermaine Couisnard from South Carolina and Keeshawn Barthelemy from Colorado.

Richardson flirted with going pro last season but withdrew his name from the NBA draft in early June to instead use an extra year of eligibility with the Ducks this season.

Richardson was hampered last season by a bout with mono that kept him out of the last five games of the season and the Pac-12 tournament.

Altman said he's counting on Richardson to lead the team.

“He knows what we’re trying to do. He’s seen both sides of it. I’m depending on that leadership," Altman said. "He’s been great to work with and I’m glad he’s back. It’s a team game. He has to bring his teammates along with him.”

Oregon went to Canada for a preseason exhibition series in August. Former Duck Chris Boucher, who plays for the Toronto Raptors, was on hand to watch Oregon play McGill University. The Ducks won handily 102-48.

The trip also took Oregon to Ottawa, Hamilton and Toronto. It was a treat for three Ducks who are from Canada: Ethan Butler of Toronto and Barthelemy and Guerrier, who are from Montreal.

“It helped us with just getting some guys together and the extra 10 days that we had. So those things helped, especially with our late start at school. The NCAA doesn’t let us start till Sept. 15. Guys that are in school in August get to start a lot quicker," Altman said.

There was one drawback. Center Nate Bittle sprained his left foot but was expected to be back for the regular season. Bittle averaged 1.7 points and 1.9 rebounds and seven minutes per game last season.

Oregon is among the teams playing in the star-studded Phil Knight Legacy and Phil Knight Invitational tournaments over Thanksgiving weekend, both honoring the Nike cofounder.

The tournament includes the top two teams in AP's Top 25, No. 1 North Carolina and No. 2 Gonzaga.

Oregon opens the season on Nov. 7 against Florida A&M to kick off a four-game homestand at Matthew Knight Arena before heading north to play in the Phil Knight Invitational.

The team's Pac-12 opener is on Dec. 1 at home against Washington State. But the conference slate begins in earnest on New Year's Eve against rival Oregon State.

The season concludes with a pair of games at home against Cal and Stanford before the Pac-12 tournament in Las Vegas March 8-11.