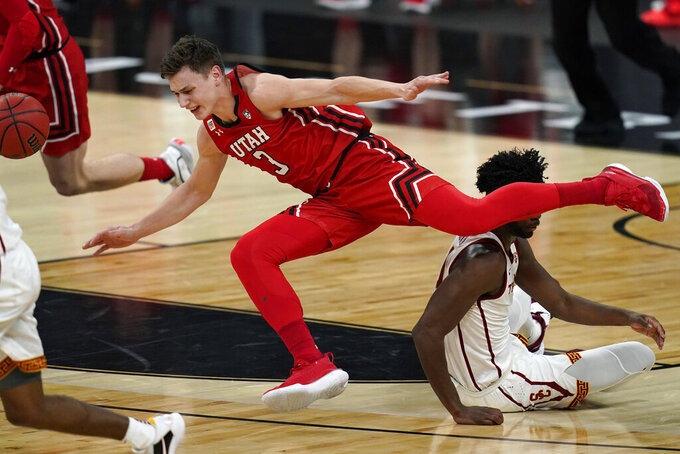 Utah's Pelle Larsson (3) falls over Southern California's Chevez Goodwin (1) during the first half of an NCAA college basketball game in the quarterfinal round of the Pac-12 men's tournament Thursday, March 11, 2021, in Las Vegas. (AP Photo/John Locher)

LAS VEGAS (AP) — Evan Mobley played just seven minutes in the first half due to foul trouble and wasn't assertive when he was in the game.

The 7-foot freshman returned to being Southern California's best player after halftime, particularly through two overtimes.

Now the Trojans are headed to the Pac-12 Tournament semifinals

Mobley scored 13 of his 26 points in the two overtimes and No. 24 Southern California outlasted scrappy Utah 91-85 in the Pac-12 quarterfinals Thursday night.

“Well, he was well rested, so he had a lot of energy, and then he had to go two extra periods in overtime,” USC coach Andy Enfield said. “Evan played an all-around game.”

The second-seeded Trojans (22-6) had a hard time shaking the seventh-seeded Utes in a game filled with methodical possessions.

Utah (12-13) hung around after trailing by 10 midway through the second half and rallied to tie it on Ian Martinez's two free throws with 2.3 seconds left in regulation. The Utes tied it again in the first overtime on Alfonzo Plummer's 3-pointer with 24 seconds left.

Mobley hit five free throws in the first overtime and scored eight points in the second to send the Trojans in to Friday's semifinals against No. 23 Colorado.

“I just stayed locked in, tried to encourage my teammates while they were playing without me for the time being," said Mobley, who had nine rebounds and blocked five shots. “And then the second half, I just tried to come in and attack.”

The Utes kept punching back after falling behind but seemed to run out of gas after holding on to beat Washington 98-95 in Thursday's first round. Timmy Allen had 20 points and 13 rebounds, and Martinez added 16 points to lead the Utes.

“We were outnumbered, we’re playing against an elite team, and our guys, there was no quit,” Utah coach Larry Krystkowiak said. “We got down 10, got down a number of times and stayed in the fight.”

USC won the teams' first meeting by holding Utah to 46 points, but the Utes won by 10 at home by shutting the Trojans down.

USC had the defensive edge in the first go-around despite Evan Mobley being limited to seven first-half minutes due to foul trouble.

The Trojans made it hard on the Utes from the start and seemed to get better without the Pac-12′s defensive player of the year, holding Utah without a field goal for nearly 6 1/2 minutes.

The Utes still managed pull to 34-29 at halftime.

USC shot well in the first half after a slow start and kept it going to begin the second, hitting 6 of its first 11 shots to push the lead to 51-41.

The Utes wouldn't let the Trojans pull away, fighting back every time they tried to run away with it.

Utah cut USC's lead to three on Alfonzo Plummer's pull-up jumper with 4 1/2 minutes left and again on a Plummer runner with just under two minutes left to help the Utes force overtime.

“I’m super proud of the way we approached it and fought,” Allen said “That’s one of the craziest games I’ve ever been a part of.”

Utah played well for a team that played the day before but didn't have enough left to finish it off.

USC had all it could handle from the tournament's No. 7 seed and will have to recover quickly with the semifinals less than 24 hours away.

Allen tested the NBA waters last season before pulling his name from the draft.

The junior guard faces another decision after this season.

Regardless of what happens, he'll leave Salt Lake City as one of the best players in Utes history. Allen was named second-team All-Pac-12 a year ago and repeated the honor this season after averaging 16.8 points, 6.0 rebounds and 4.0 assists per game.

“I’ve been trying to think about it as small amount as possible all year,” Allen said. “As soon as your head gets somewhere else, you mess up your current situation and I’m just trying to be bought into this program and this team all year and the past three years. So I’ll address that when I need to.”

USC moves on to face Colorado in Friday's semifinals.

Utah, with an NET ranking of 88, could be a longshot to get an NIT bid.