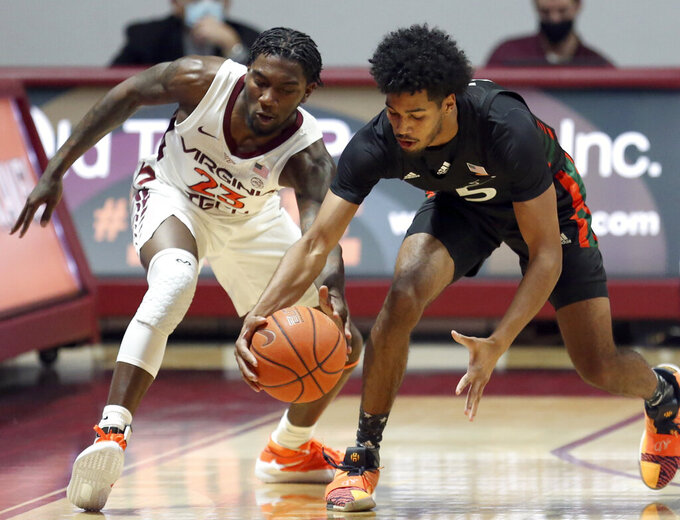 Virginia Tech's Tyrece Radford (23) tries to get the ball from Miami's Harlond Beverly (5) during the first half of an NCAA college basketball game, Tuesday, Dec. 29, 2020 in Blacksburg, W.Va. (Matt Gentry/The Roanoke Times via AP, Pool) 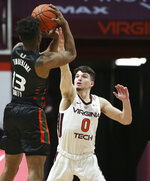 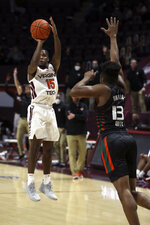 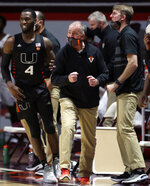 BLACKSBURG, Va. (AP) — Picked to finish 11th in the ACC in the league’s preseason poll, upstart Virginia Tech will enter 2021 with at least a share of the top spot in the conference standings.

Keve Aluma scored a career-high 26 points and No. 24 Virginia Tech made crucial free throws in the final minute on the way to an 80-78 victory over Miami on Tuesday night.

Aluma hit 9 of 16 shots from the floor and 7 of 10 from the line for the Hokies (8-1, 2-0 Atlantic Coast Conference), who won their fourth straight game. Aluma added six rebounds and four assists.

“I don’t really know if I’m surprised,” Aluma said of the Hokies’ hot start. “I don’t think anyone is really super worried about rankings. I think we’re all just trying to come out and take each game one at a time.”

Justyn Mutts added 15 points for Virginia Tech, which made three free throws in a sloppy final 37 seconds to hold off the ’Canes (4-3, 0-2). Tyrece Radford finished with 13 points, and Jalen Cone had 12 for the Hokies, who turned the ball over twice and missed four free throws on their final six possessions.

“Fortunate to win,” Virginia Tech coach Mike Young said. “Sometimes, I’ve played well and lost. I’d much prefer to play poorly and win the game, and we did that.”

The ’Canes trailed by as many as 17 points in the second half, but rallied in the closing seconds. Wong missed a 3-pointer with five seconds left that would have given Miami the lead. Mutts then missed two free throws for the Hokies with 3 seconds left, but Tech’s Wabissa Bede stole an outlet pass after the second miss, closing out the game.

“All in all, if you get kind of an open 3-point shot at the top of the key to win on the road against a Top 25 team, pretty much you’d take that,” Miami coach Jim Larranaga said.

Miami: The ’Canes have lost three of their last four, and injuries continue to plague them. Preseason All-ACC guard Chris Lykes missed his fifth consecutive game with an ankle injury, and guard Kameron McGusty has missed three straight with a hamstring injury. The ’Canes missed both, too, as they committed a season-high 19 turnovers, which contributed mightily to their demise.

Virginia Tech: Behind Aluma and Mutts, the Hokies played well until the final 1:30, but two turnovers and shoddy free-throw shooting — 3 of 7 in that span — nearly led to them squandering a huge second-half lead. They will need to get that cleaned up, as they get set to take a step up in competition Saturday, when they play at No. 23 Virginia in their first true road game of the season.

“I know Tony (Bennett, Virginia’s coach) well enough to know there’s not a bunch of wholesale changes,” Young said. “I know what we’re going to see. We look forward to the competition.”

The length of the Hokies’ second stint in the Top 25 will be determined Saturday in Charlottesville. A win there should propel them several spots in the poll.

The Hokies weren’t complaining about the officiating following their two-point win — after all, they made more free throws (13) than Miami attempted (10). But Young wants to see officials lighten up on bench warnings. Virginia Tech received several during the course of the game, but Young encourages his bench players to be enthusiastic during the game, mainly because an empty arena leaves game energy up to the players instead of the fans.

“We’ve got to stand down with that sort of thing right now,” Young said. “Our first three games in here, we weren’t very good. The energy level was not what we needed, and here we are in league play, and we’re certainly not embarrassing anyone. We’re pulling for our teammates. We’ve got to generate that kind of emotion from the unit.”

Virginia Tech: The Hokies play at No. 23 Virginia on Saturday.