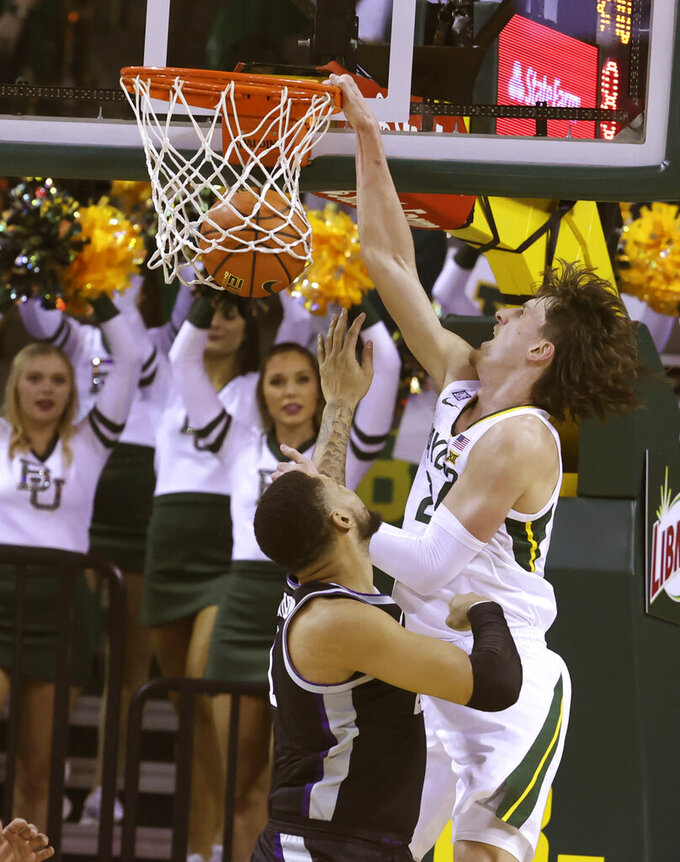 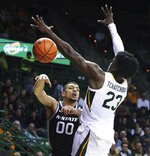 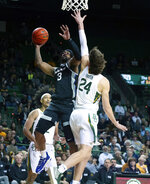 WACO, Texas (AP) — Kendall Brown and fourth-ranked Baylor were motivated at home after getting back on track on the road.

Brown and Jonathan Tchamwa Tchatchoua each had a double-double as the Bears won their third game in a row since rare consecutive losses in the Ferrell Center, overwhelming Kansas State 74-49 on Tuesday night.

The Wildcats had their lowest-scoring game this season while shooting only 32% from the field, three days after a near upset of fifth-ranked Kansas.

“Yeah, definitely the last two home games weren’t the outcome we wanted. We just knew we had to practice and be all around better coming out for the next home game,” said Brown, who had 10 points and 11 rebounds. “Definitely our defense was to lock them up, and everyone contributed."

Tchamwa Tchatchoua scored 13 points on 6-of-7 shooting, including a 3-pointer from the top of the key. LJ Cryer added 14 points with three 3s and Adam Flagler had 13 points and five assists for Baylor (18-2, 6-2 Big 12), which two weeks ago had successive home defeats for the first time since the end of the 2015-16 season.

Those losses to Texas Tech and Oklahoma State ended the Bears’ 21-game winning streak and cost the defending national champions their No. 1 ranking in the AP poll. They rebounded with wins last week at West Virginia and Oklahoma.

“Well, we like this feeling a little bit better than the last two home games,” coach Scott Drew said. “I think our defense has been ticking up on the uptick. We’ve been doing a good job addressing some fundamentals we had kind of lapsed on.”

The Wildcats (10-9, 2-6) led only after Ismael Massoud made a 3-pointer on their first shot of the game, their last of four in a row against Top 25 teams. They beat Texas Tech and Texas before jumping out to a 50-34 halftime lead Saturday over Kansas, which scored the game’s last six points to pull out a 78-75 win.

“I pleaded yesterday and today, but I could feel it, I could feel it coming,” K-State coach Bruce Weber said. “It’s a shame what happened Saturday. When you looked at the schedule a couple of weeks ago and you saw four top-20 teams in a row ... if you could get two out of the four, you’d probably be pretty happy. We had a chance to get three.”

Nijel Pack had 13 points to lead Kansas State. He was the Big 12 co-player of the week after scoring 35 against Kansas, but he missed seven of his first eight shots against the Bears.

Kansas State: It was only the second double-digit loss for the Wildcats in Big 12 play, and the first time in their six league losses they didn’t lead or tie the game after halftime. ... Starting guard Selton Miguel turned his right ankle early in the second half. Weber said it was very swollen and he didn’t know the severity of the injury.

Baylor: Freshman guard Jeremy Sochan played for the first time in five games since turning his left ankle in the first half at TCU on Jan. 8. He made a 3-pointer from the left corner with 6:18 left in the first half, then had a steal and an assist on Brown’s breakaway layup that made it 26-11. ... Senior transfer point guard James Akinjo is still bothered from falling hard on his tailbone at the end of the game against Texas Tech two weeks ago. He sat out his second game since then, and was 2-of-14 shooting in two games during that stretch.

After Massoud’s opening 3, K-State missed 13 of its next 14 shots, misfiring on six in a row over 4 1/2 minutes and then seven more in nearly six minutes. The Wildcats were down 18-8 when Mike McGuirl made a layup with 8:04 left in the first half, and only that close because Baylor was in a four-minute span without making a shot.

Markquis Nowell, who had 11 points, converted consecutive Baylor turnovers into two layups that got K-State within 42-28, and then was at the free throw for two attempts after another Baylor turnover with just over 15 minutes left. He missed both free throws, and Baylor scored the next seven points in less than two minutes.

“It was just kind of over at that point,” Weber said.

Kansas State: At Ole Miss on Saturday in the Big 12/SEC Challenge.

Baylor: At Alabama in a matchup of the only two teams without multiple losses in the Big 12/SEC Challenge. The Bears’ 7-1 record in the event is the best. Alabama is 3-1, its loss coming to Baylor three years ago.