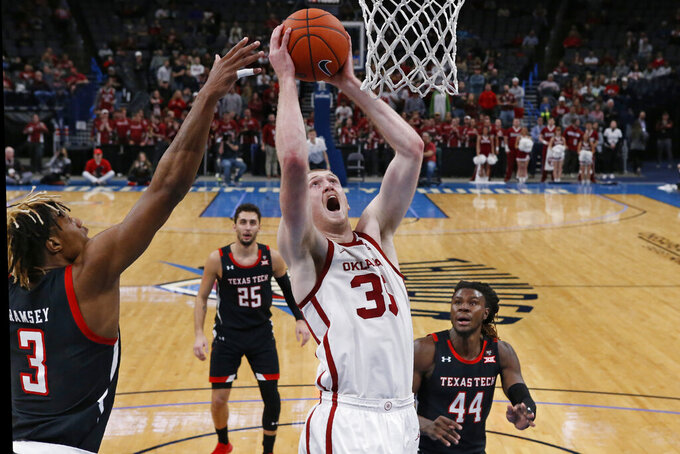 FILE - In this Tuesday, Feb. 25, 2020 ,file photo, Oklahoma forward Brady Manek (35) shoots between Texas Tech guard Jahmi'us Ramsey (3) and guard Chris Clarke (44) in the second half of an NCAA college basketball game in Oklahoma City. The Sooners won three of their last four games last season to finish in a tie for third place in the Big 12. Plenty of talent returns, led by seniors Austin Reaves and Brady Manek. (AP Photo/Sue Ogrocki, File)

Oklahoma is fighting for respect.

The Sooners won three of their last four games last season to finish in a tie for third place in the Big 12, and 70% of their scoring is back. The accolades that normally come with such experience and success has eluded the Sooners: They were picked to finish sixth in the Big 12 preseason poll.

Oklahoma guard De’Vion Harmon said the Sooners will use that as fuel.

“I like sixth,” he said. “Give us sixth every time as far as I’m concerned, because there’s nothing like working your way to the top. It’s nothing like coming from the bottom and going back up. That’s a different type of mindset that you’ll have from the team or the player that’s already at the number one spot.”

The Sooners lost Kristian Doolittle, a forward who led the team with 15.8 points and 8.9 rebounds per game last season and was a first-team All-Big 12 selection. But plenty of talent returns, led by seniors Austin Reaves and Brady Manek.

Reaves was named to the preseason All-Big 12 team after finishing sixth in the Big 12 with 14.7 points per game last year. Manek averaged 14.4 points and 6.2 rebounds.

“It was great for Austin to see the preseason recognition,” coach Lon Kruger said. “Surprised Brady didn’t get any. He’s been terrific. But that’ll probably just motivate him a little bit more, which there’s nothing wrong with that.”

Reaves closed out last season strong. He scored 41 points and hit the game-winner in the final game, a comeback win over TCU.

“We were frustrated that we couldn’t keep playing but if you think about it, if it had to end, it was a good way to end,” Reaves said. “So you just keep building. Never get satisfied, never get complacent. You just keep pushing forward and strive to get better every day.”

Reaves made 45% of his 3-pointers in two years at Wichita State before transferring, but he made just 26% of his threes last season.

Kruger said Reaves has worked hard and returned to form.

“He had a really good year last year without shooting the ball as well as he’s capable of,” Kruger said. “He’s the first one to recognize and admit that. I think he spent time in the offseason taking that to heart and working hard to get that consistency back.”

Harmon is set to take on a larger role this season. He averaged 7.4 points and started 22 games as a freshman last season, adding scoring punch to the trio of Doolittle, Reaves and Manek.

Shooting is where Kruger said Harmon had the most room for growth. Last year, Harmon shot 36.4% from the field.

“He’s had a tremendous offseason in terms of summer and fall and working harder to be bigger and stronger,” Kruger said. “He’s spending a ton of extra time in the gym as far as making shots. He’s improved that a lot. We expect him to continue to make progress and have a great year.”

He also averaged 3.4 points and 2.1 rebounds last season -- numbers that should improve now that Doolittle has moved on.

“Offensively, he’s starting to expand that part of his game as well, and we need to throw it to him a little bit more,” Kruger said. “As he gets results, we’ll continue to improve on getting him the ball.”

Umoja Gibson is a transfer from North Texas who could have an immediate impact. He averaged 14.5 points, 2.2 rebounds, 1.9 assists and 1.4 steals last season as a sophomore. He was ruled eligible late last month.

The Sooners are still waiting for a ruling on Cal State Northridge transfer Elijah Harkless' eligibility. He averaged 10.7 points, 5.8 rebounds, 2.9 assists and a Big West-leading 1.7 steals as a sophomore last season.

Guard Jamal Bieniemy transferred to UTEP in the offseason. He averaged 5.2 points, 4.0 rebounds and 2.8 assists per game last season and was a versatile defender. He started 47 games in two years with the Sooners.

The Sooners open their season Nov. 25 at home against Texas-San Antonio. They host Florida on Dec. 2, Xavier on Dec. 9 and Alabama on Jan. 30. Oklahoma opens Big 12 play on Dec. 6 at TCU. The Sooners won't play Arkansas because of adjustments to COVID-19, but Kruger expects the teams to play next year.