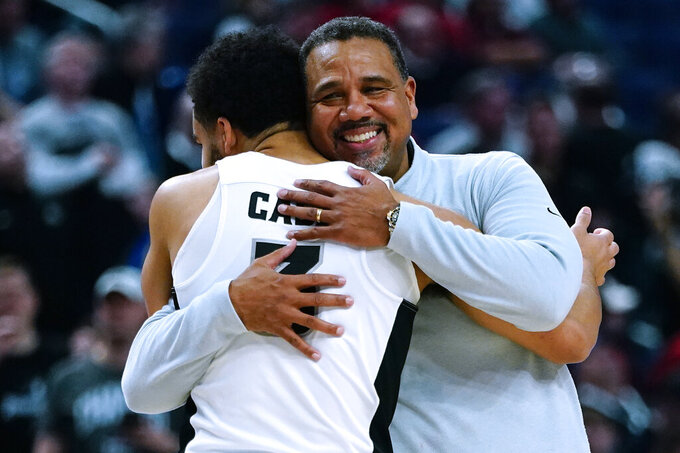 Providence coach Ed Cooley, right, hugs guard Matteus Case as he comes off the court during the second half of the team's college basketball game against Richmond in the second round of the NCAA men's tournament Saturday, March 19, 2022, in Buffalo, N.Y. (AP Photo/Frank Franklin II)

BUFFALO, N.Y. (AP) — As the clock ticked down on Providence's best performance of the season, Friars fans behind the bench were chanting coach Ed Cooley's name.

The hometown hero who grew up dreaming of an opportunity to be part of Providence basketball is taking the Friars to their first Sweet 16 in 25 years.

“I just can’t tell you how grateful I feel for our players, our college, our city,” Cooley said. “It’s hard to get to this point. We’re just a little school that everybody says, oh, it’s Providence. Well, Providence is in the damn building.”

Noah Horchler had 16 points and 14 rebounds and the hot-shooting Friars routed 12th-seeded Richmond 79-51 on Saturday night in the second round of the NCAA Tournament.

Providence had five players score in double figures and held the Spiders to 1 of 22 on 3-pointers.

“We have a lot of threats on this team both on the offensive end and on the defensive end, and when we play like this, I feel like we’re the best team in the country,” A.J. Reeves said.

The fourth-seeded Friars (27-5) will face Kansas, the top seed in the Midwest Region, in Chicago next week.

Providence has made its living this season by winning the close ones, 16 in all by single digits. The Friars talked this week about being well aware of their skeptics and motivated by being called the luckiest team in America. Instead of tuning out the haters, the Friars have leaned into being doubted.

The Big East regular-season champions looked like a juggernaut against Richmond, posting the most lopsided NCAA Tournament victory in program history.

“This was literally our best game of the season,” said Cooley, who has taken the Friars to the tournament six times in his 11 seasons as coach, but never past the first weekend.

Providence controlled the game from the start and went up 21 on the Spiders (24-13) less than two minutes into the second half when Horchler swished a 3 from the corner. The Friars shot 52% from the field for the game, including a season-best 54.5% from 3 (12 for 22).

They came in shooting 34.3% from long range.

Richmond coach Chris Mooney said the Friars do a lot of things well, but “I wouldn’t have anticipated them shooting so well.”

The Friars last advanced past the second round in 1997 when they reached the Elite Eight. The only other time was 1987 when they went to the Final Four under coach Rick Pitino.

Richmond crashed this NCAA Tournament by winning four games in four days to take the Atlantic 10 championship as a sixth seed, and then upset Iowa in the first round.

The Spiders looked like a spent bunch against Providence, but they weren't about to use that as an excuse.

“I wouldn’t chalk it up to that," point guard Jacob Gilyard said. “At the end of the day, they played better basketball than us. They made shots. We just weren’t good enough.”

Providence gave the Spiders little hope to spring another surprise. The Friars scored the first seven points. They were getting open shots and knocking them down, and keeping Richmond's Princeton offense from creating easy baskets with its backdoor cuts and passes out of the post — something Iowa struggled to do.

The Friars' lead reached 16 when Justin Minaya made a 3 from the wing with 9:17 left in the first half. When Horchler dropped in this his third 3-pointer of the half with 19 seconds left, it was 39-24.

Gilyard put up an airball at the other end to finish the half 0 for 6 from the field. Richmond's iron man point guard, who had played every minute of the Spiders' previous six games, finished his decorated six-year career with four points.

Gilyard finally exited the game with 1:15 remaining, receiving a hug from Mooney. Fellow sixth-year senior Grant Golden (10 points and five rebounds) also was greeted with a warm embrace from his coach.

Cooley allowed some of his walk-ons to play the final minute. Before the regulars made their way to the bench for one last huddle, Reeves looked to the crowd of Friars fans in the stands, smiled and said: “Sweet 16. Sweet 16."

Providence: The Friars had shot over 50% from 3-point range in only one other game this season. They made 53.3% in a win over DePaul on Jan. 1.

Providence will play Kansas for the first time.