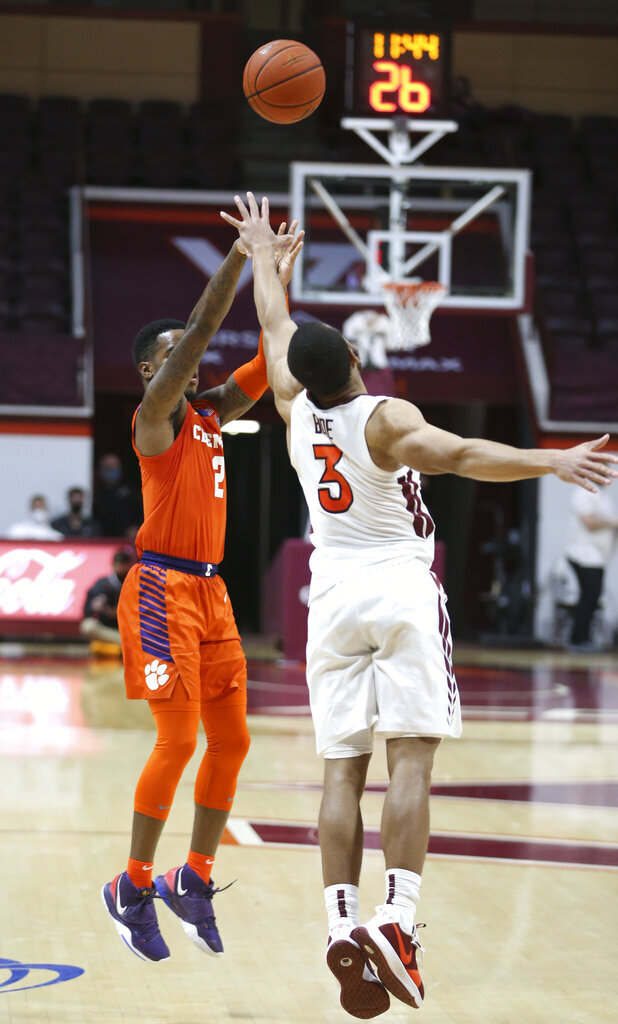 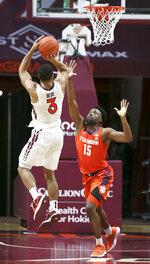 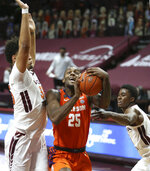 BLACKSBURG,Va. (AP) — Just three weeks into the season, Virginia Tech has established itself as a surprise team.

Tyrece Radford scored 15 points and the Hokies beat No. 24 Clemson 66-60 on Tuesday.

“I think it’s premature to say we’re for real,” Virginia Tech coach Mike Young said. “We’re better … A good night for the Hokies. I’m really proud of our team. I thought we took some legitimate steps forward, and we needed to after getting our tail fanned against the Nittany Lions (last Tuesday).”

Keve Aluma and Nahiem Alleyne each added 13 points for Virginia Tech, which won its conference opener for the fifth time in six seasons.

Dawes had 18 points to lead Clemson, including five 3-pointers, while Simms finished with 15.

“We’ve been the hunted tonight, and usually we’re the hunter, and I told our guys that,” Clemson coach Brad Brownell said. “Everybody at this level has got really good players, and there’s not much difference. Your effort and your execution have got to be at a high level to win. I don’t think our effort and execution were better than Virginia Tech’s. Theirs was a little bit better … They made enough plays to keep us at bay and win the game.”

Clemson: The Tigers struggled to run their offense against the Hokies, and they settled for a lot of tough shots – part of the reason why they shot 38%, which marked their second-worst percentage of the season. They know how to defend, but will need to find more consistency on offense to rank among the nation’s better squads.

Virginia Tech: After being destroyed by Penn State a week ago – the Nittany Lions shot 50% and hit 12 3-pointers – the Hokies responded by playing their best defense of the season. Clemson’s 38% field goal percentage marked the worst by a Virginia Tech opponent this season. The Hokies dropped 13 spots in the Associated Press top 25 poll following the Penn State loss, but could climb back in it next week after their performance against the Tigers.

“We were so much more connected,” Young said of the Hokies’ defense. “We were lighter on our feet. We contested dribble handoffs and ball screens, and our rotations were much more sound.”

The Tigers’ first visit in the top 25 in more than two years probably will last only a week after losing to the unranked Hokies.

DIARRA OPTS OUT FOR HOKIES

Virginia Tech guard Cartier Diarra played in four of the Hokies’ first five games, but he informed Young before the Clemson game that he was opting out of college basketball indefinitely because of fears related to COVID-19. Young said that Diarra, who was averaging 7.5 points and 20 minutes per game, was welcome to return once he felt comfortable with the situation.

TYSON OUT INDEFINITELY FOR TIGERS

Clemson played without Hunter Tyson, who had started two games and was the team’s fourth-leading scorer, because of a facial injury. Tyson, who was shooting 52.6% from the floor, including 50% from beyond the 3-point arc, will be out for a while, according to Brownell. The Tigers certainly could have used his shooting against Virginia Tech.

“Yeah, we miss him, but I’ve told you guys this in the past (that) I don’t like to talk about players that didn’t play and the ‘what if’ game because I think that disrespects the team that won,” Brownell said. “So we didn’t have Hunter. He could help us, but we had enough other guys there to win the game and Virginia Tech just outplayed us.”