Razorbacks return to Sweet 16 with 53-48 win over Aggies 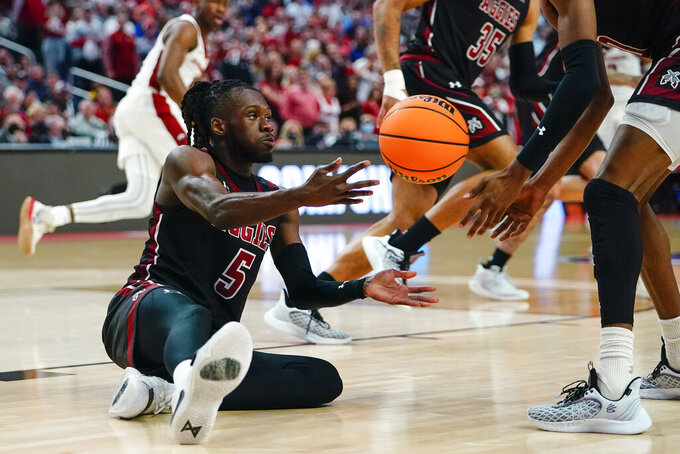 New Mexico State guard Clayton Henry (5) flips the ball to a teammate during the first half of a college basketball game against Arkansas in the second round of the NCAA men's tournament Saturday, March 19, 2022, in Buffalo, N.Y. (AP Photo/Frank Franklin II) 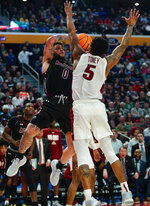 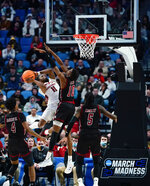 BUFFALO, N.Y. (AP) — Arkansas’ Eric Musselman leaned heavily on his NBA coaching days of having to defend Kobe Bryant in devising a plan for how to keep New Mexico State’s Teddy “Buckets” Allen in check.

And it was only fitting to Musselman that swingman Au’Diese Toney — the player he counted on most to contain Allen — capped the decisive run with a one-handed, fast-break dunk with about six minutes left to launch the fourth-seeded Razorbacks (27-8) into the Sweet 16 for a second consecutive year following a 53-48 win over the No. 12-seeded Aggies on Saturday night.

“That was perfect,” Musselman said of Toney converting Davonte Davis’ long pass with a soaring slam to put Arkansas up 41-33 in a tightly contested defensive struggle. “For him to be rewarded with basically the exclamation point after everything that he had done defensively.”

In scoring just seven points, Toney was pleased to do his part on defense. Allen finished 5 of 16 for 12 points, two days after scoring 37 in the Aggies' first-round win over No. 5 seed Connecticut.

“The man can play ball,” Toney said of Allen. “My mindset was just to keep him under control and not let him get loose, and my guys — I couldn’t do it without my guys, you know?”

JD Notae scored 18 points and nabbed nine steals before fouling out with 1:22 left, and Jaylin Williams had 10 points and 15 rebounds for the Razorbacks. Notae’s replacement, Chris Lykes, hit all four free-throw attempts in the final 10 seconds to secure the win after the Aggies closed within two on Allen’s 3-pointer with 12 seconds left.

The Razorbacks advanced to play top-seeded Gonzaga at the West Region site in San Francisco on Thursday.

Johnny McCants had 16 points and 12 rebounds for New Mexico State. The Western Athletic Conference champion was denied a chance to reach the Sweet 16 for the second time in school history, and first since 1992.

“We weren’t shy about talking about San Francisco and beyond,” Aggies coach Chris Jans said. “We thought this team had a chance to make one of those special runs, but it just didn’t happen.”

Though his numerous NBA stops spread over 10 seasons were mostly short ones and included head-coaching stints at Golden State and Sacramento, Musselman referred to the notes he kept when it came to guarding Bryant, the late Los Angeles Lakers star.

“I didn’t know if a college team was going to be able to do that,” Musselman said.

“Tonight’s scheme was a little bit more complicated than we’ve had,” he added. “I was worried about it today at the team meal even as late as 4 p.m. Did we try to squeeze too much in? When you demand a lot, it’s amazing what people can retain.”

The Razorbacks pressured Allen each time he got the ball, and then kept him guessing as to when they would send the double-team.

“Credit to them, they had a good game plan,” Allen said. “We still could have executed better, but sometimes it just doesn’t work out.”

The Razorbacks defense attacked the Aggies on the perimeter, pushing them further beyond the 3-point line. The pressure led to New Mexico State forcing numerous attempts with the shot clock running down. The Aggies were just 6 of 25 with 12 turnovers in the first half.

Arkansas then capitalized on New Mexico State’s missed shots and turnovers by scoring 13 points on the fast break in the first 20 minutes.

New Mexico State adapted in the second half by working the ball more inside.

With Arkansas hitting just three of its first 15 attempts, the teams combined to go 6 of 28 from the field through the first 11 minutes. The Aggies were the first to get to double digits when Notae completed a three-point play to put Arkansas up 12-0 with 7:47 left in the first half.

The Aggies turned the ball over 19 times and were outscored 15-0 in fast-break points.

The Razorbacks improved to 17-3 in their past 20 games, which came after opening the SEC season with three consecutive losses.