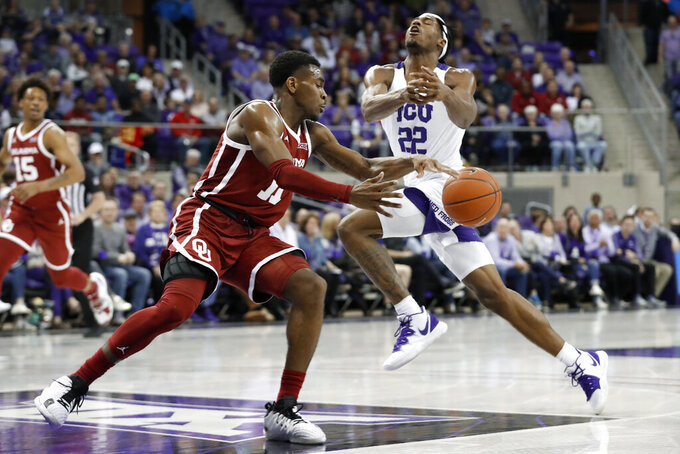 Oklahoma guard De'Vion Harmon (11) breaks up a drive to the basket by TCU guard RJ Nembhard (22) in the second half of an NCAA college basketball game in Fort Worth, Texas, Saturday, March 7, 2020. (AP Photo/Tony Gutierrez) 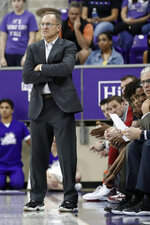 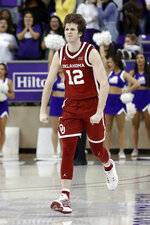 FORT WORTH, Texas (AP) — The final play was drawn up for Austin Reaves, and the Oklahoma guard made one more shot to give the Sooners a victory in the final half-second of the regular season.

Reaves scored 41 points, the most by a Big 12 player this season, including the game-winning fadeway jumper as the Sooners beat TCU 78-76 on Saturday after being down by as many as 19 points in the second half.

“I just had the confidence to make the shot,” said Reaves, who followed that by making several gestures when running toward the other end of the court, and at one point held both hands at his throat indicating a choking motion.

The Sooners, who clinched the No. 3 seed for the Big 12 tournament instead of slipping to seventh, never led until Reaves made the last shot.

It was a bitter ending for TCU's senior day, and oh so similar to Oklahoma's regular-season home finale four nights earlier when Texas banked in a 3-pointer with .4 seconds left to beat the Sooners 52-51.

“We just lost one like that,” Oklahoma coach Lon Kruger said. “So I feel so for coach (Jamie) Dixon and how great their guys were playing, and then we've got to to sneak it out there at the end. But I really do have mixed emotions about not, not being as excited as I would like to be because I know how painful that is."

Kristian Doolittle, the only Oklahoma senior, had 15 points and 11 rebounds.

“We definitely had a little bit of mental loss and focus. We gave them life in the second half,” Bane said.

“Give Reaves credit, he made shots, he made plays, he got to the foul line over and over again,” Dixon said. “I was disappointed we fouled him in situations that shouldn’t have been fouled in. That’s the problem. We’ve got to get smarter.“

Brady Manek, who came in averaging nearly 15 points a game for Oklahoma, was 0-for-5 shooting and scoreless until he hit a 3 with 1:58 to go. He made another one a minute later to tie the game.

“Big time. I mean, that's the type of player he is. He makes big shots,” Reaves said. “We tell him every time, keep shooting and we believe in you. He's one of the best shooters I've ever been around. So let it fly."

Jaire Grayer, another TCU senior, scored the game's first five points and finished with 18. Kevin Samuel and PJ Nembhard both had 12.

Bane had 10 points, including two 3s in the first 6:07 of the game, and 19 points by halftime. He was already tied for TCU's career record for 3-pointers at 243 before Saturday.

Oklahoma: The Sooners, coming off a tough one-point home loss to Texas, rebounded with their third win in four games. That likely will lock up the Sooners' seventh NCAA Tournament appearance in eight years, though another win in the Big 12 tournament would provide another boost and help their seeding.

The Big 12 tournament, where TCU plays Wednesday against Kansas State. Oklahoma will play West Virginia in the quarterfinals Thursday.