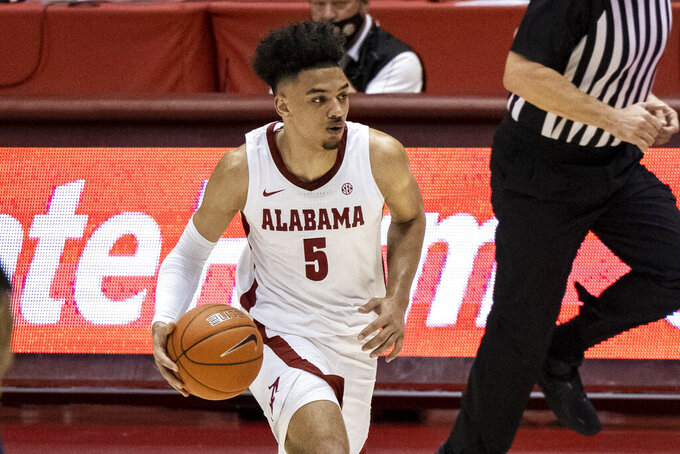 Alabama guard Jaden Shackelford dribbles during the second half of the team's NCAA college basketball game against Auburn on Tuesday, March 2, 2021, in Tuscaloosa, Ala. (AP Photo/Vasha Hunt) 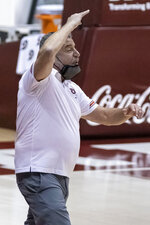 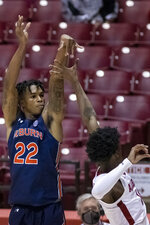 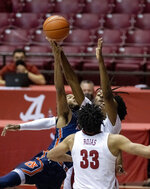 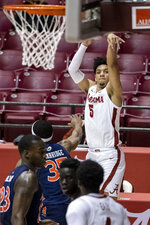 TUSCALOOSA, Ala. (AP) — Alabama dispatched its chief rival again, cut down the nets to celebrate a Southeastern Conference championship and won its 20th game.

It wasn't the Crimson Tide's best offensive performance, but there was still plenty to celebrate.

Jaden Shackelford scored 23 points, made five 3-pointers and helped No. 8 Alabama quash a second-half threat in a 70-58 victory over Auburn Tuesday night.

“Our defense has been carrying us for a good month now,” Tide coach Nate Oats said. “I can't say enough about the job our guys are doing.”

Alabama had secured its first SEC title in 19 years at Mississippi State over the weekend and followed that by completing its first season sweep of Auburn since 2014-15. The Tide cut down the Coleman Coliseum nets to celebrate their championship after the game.

Shackelford made 5 of 9 3-pointers for a team that came in having attempted more than any other in Division I. He scored 15 points in the second half after making a combined 3 of 17 3s over the past three games.

“I just keep telling him to make open shots and he finally got himself going," Oats said.

Herbert Jones had 10 points, nine rebounds and six assists for the Tide, including a coast-to-coast dunk in the first half. John Petty and Jahvon Quinerly each scored 11 points.

It was the final home game for Alabama seniors Jones, Petty and Alex Reese.

“Sad that it's ending, but I'll remember this forever,” Petty said. He and Jones both opted to return after exploring entering the NBA draft after last season.

“We came here to make Alabama a basketball school, and I feel like we've got that going in the right direction,” Jones said.

Devan Cambridge scored 11 points and Jamal Johnson had 10 for the Tigers.

“We gave ourselves a chance to win but offensively we’ve got some limitations,” said Auburn coach Bruce Pearl, who called Alabama “a great defensive team.”

“We weren’t able to make some shots that we made against Tennessee, and we had way too many turnovers,” Pearl added.

The margin was back to double digits in less than a minute thanks to Petty's 3-pointer and a pair of free throws from Shackelford. Shackelford then scored on a drive and made a 3, emphatically turning away the threat.

“They’re the best 1-on-1 defensive team in the league,” Pearl said.

Auburn: Struggles taking care of the ball without Cooper (left ankle injury) continued with 15 turnovers — including three shot-clock violations — in the first half alone. Auburn finished with 23 turnovers.

Alabama: Showed poise in handling the second-half threat. Made 10 of 28 3-pointers (28.6%) but committed only seven turnovers. ... Alabama is hoping to secure a No. 1 seed in the NCAA Tournament for the first time with a strong finish.

Alabama visits Georgia to close the season on Saturday, trying to match its best SEC record set in 1986-87.