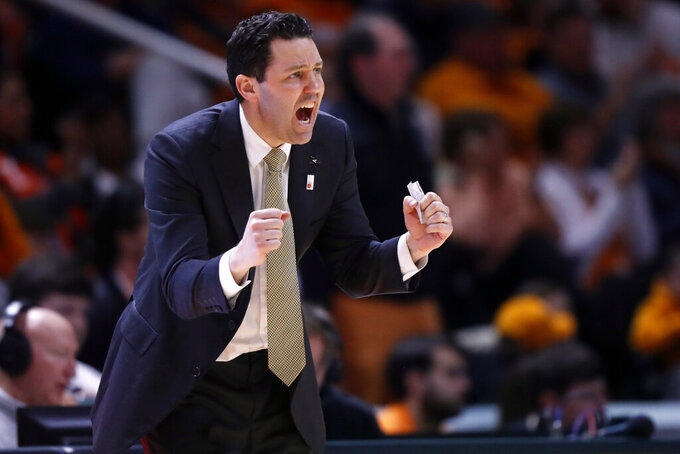 FILE - In this Feb. 19, 2019, file photo, then-Vanderbilt coach Bryce Drew encourages his players during the second half of an NCAA college basketball game against Tennessee, in Knoxville, Tenn. Bryce Drew is the new head coach at Grand Canyon University. Drew has three Division I transfers joining the program he took over in March. (AP photo/Wade Payne, File) 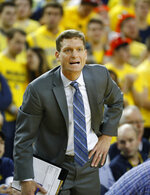 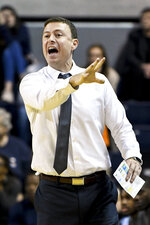 Mark Byington has spent more than three months as the men’s basketball coach at James Madison without being able to take a recruiting trip or meet personally with the eight players joining his program during the coronavirus pandemic.

But he takes some comfort in that five of the newcomers have Division I experience. He’s hoping the older players provide some stability amid these uncertain times for college athletics – highlighting the enhanced value of transfers for the coaches who changed jobs after last season and are trying to build new programs.

“We wanted to get older,” said Byington, who left Georgia Southern for the Colonial Athletic Association program. “And the best evaluations we could get during a pandemic was watching guys who played against other Division I players.”

Twenty Division I programs have changed coaches since March, when the pandemic shut down college and professional sports as well as in-person recruiting. Wake Forest is the only school from a Power Five conference to do so after firing Danny Manning and hiring Steve Forbes from East Tennessee State.

Other notable changes include Hall of Famer Rick Pitino going to Iona, former Vanderbilt and Valparaiso coach Bryce Drew moving to Grand Canyon, ex-Mississippi coach Andy Kennedy returning to his alma mater at UAB, and former Michigan and Texas assistant Luke Yaklich taking over at Illinois-Chicago. And there's former Kentucky and Texas A&M coach Billy Gillispie taking over at Tarleton State, which begins the transition Wednesday to Division I.

They’ve bolstered their first recruiting classes with multiple transfers, from Division I graduates to junior-college additions. Some committed as the NCAA considered changing the waiver process to allow all Division I athletes to transfer once without sitting out a season, though that was delayed as the NCAA looks instead at changing legislation by January.

It remains unclear how many transfers will get a waiver to play right away or must sit out a year.

That is, of course, whenever a season might take place as the pandemic continues. It's why ACC Network analyst and former Notre Dame player Jordan Cornette pointed to more than talent and fit with a transfer's value.

Maturity ”comes into play with transfers,” Cornette said. “Those are the ones you will lean heavily on because they have proven they can make the jump from high school to college. They can manage their academics. They can play at this level. They can be competitive. They can be voices.

“That’s proven. … And now we need them to be more mature than ever because of what’s going on in the world and the uncertainty of the sport right now.”

That includes when teams can get back to “normal” recruiting.

On Thursday the NCAA extended a dead period through August for all Division I sports. Coaches are barred from in-person activities such as traveling to meet a recruit or bringing one in for an official visit. They're leaning on phone calls, text messages and Zoom meetings to communicate with recruits, as well as returnees scattered around the country as campuses closed due to the pandemic.

But in many cases they don’t have information from personally evaluating a player’s game or observing something as subtle as body language. A transfer, particularly from Division I, could offset some risk with experience.

Wake Forest and James Madison aim to take advantage with five Division I transfers, while UAB and UIC joined Grand Canyon with three.

“If you miss on a high school player, that might be three or four years in your program,” Forbes said. “Where if you miss on a transfer or a grad transfer, it might be one or two. So it’s not perfect. We’re not in a perfect science. You don’t really know anybody until you get them on campus.”

Others like Pitino at Iona and new Western Illinois coach Rob Jeter went heavy on juco players with four each, while Jeter’s class includes two Division I transfers and one from Division III.

“Whether it be the junior college or four-year transfers, there’s obviously more concrete information and background on what they can do: more video, more stats, more opportunities to talk with people,” said Yaklich, a former assistant to John Beilein and Shaka Smart.

“If the pandemic hadn’t hit, would things be different? Perhaps,” he said of the transfer-heavy approach. “But I think in recruiting, it has a way of working itself out.”