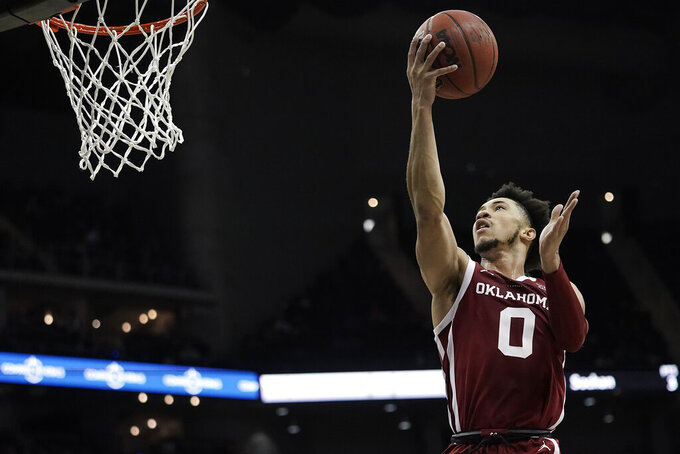 Oklahoma guard Jordan Goldwire shoots during the first half of an NCAA college basketball game against Baylor in the quarterfinal round of the Big 12 Conference tournament in Kansas City, Mo., Thursday, March 10, 2022. (AP Photo/Charlie Riedel) 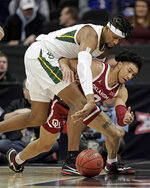 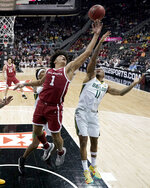 KANSAS CITY, Mo. (AP) — Oklahoma coach Porter Moser remembers the feeling a couple weeks ago when the Sooners learned that Elijah Harkless, their heartbeat on the floor and one of their best all-around players, was done for the season with an injury.

They were stunned, Moser said, and it took a couple games to get back on track.

The Sooners are certainly rolling now.

Umoja Gibson scored 14 points, including a crucial three-point play with less than a minute to go, and Oklahoma rallied in the second half for a 72-67 victory over third-ranked Baylor in the Big 12 quarterfinals Thursday night to undoubtedly earn some major points with the NCAA Tournament selection committee.

“Really happy for the guys to stick with us and be resilient,” Moser said. “We regrouped. We've won four in a row, and that was a huge win for us. It's a testament to this group and how close they're becoming, and how resilient they're becoming, blocking out all the outside noise and just focusing on what we need to do to win games.”

It helps that Jacob Groves, who took Harkless' spot in the starting lineup, came through with 15 points. Marvin Johnson added 12, including two foul shots with five seconds left, and Jalen Hill and Jordan Goldwire finished with 10 apiece.

The Sooners were clinging to a 61-60 lead with just under 3 minutes left when Gibson broke a full-court press for a layup. The 6-foot-1 guard added a three-point play to make it 68-62 with 49 seconds left, then grabbed the rebound off James Akinjo's missed 3-pointer to give Oklahoma the ball with just over 30 seconds remaining.

The Sooners did enough at the foul line to hold on from there.

“I think it’s just kind of an accumulation of a lot of things, building up to the end of the season,” Groves said. “We’re playing great basketball at the right time of the year, and that’s exciting. Got two more to win.”

Akinjo finished with 16 points but was just 6 of 16 from the field for Baylor (26-6), the co-champions with Kansas during the regular season. Jeremy Sochan added 13 points and nine rebounds off the bench.

“I was proud of the way our guys competed at the end, where we pressed and cut it to a one-possession game, but how we started both halves was probably a key to the game,” said Baylor coach Scott Drew, whose team beat the Sooners twice in the regular season. “I probably did a bad job of preparing our guys.”

The Sooners, who had won three straight coming into the tournament, kept their momentum going throughout most of the first half. They scored the first seven points, at one point led 17-10 and never trailed for the first 18-plus minutes.

All that work went to waste in the final couple minutes of the first half.

They were still leading 25-21 when Johnson and Groves combined for three turnovers in four trips down the floor. The last of them ended up in a run-out for the Bears, and Dale Bonner drilled a 3 from right in front of the Oklahoma bench, giving the reigning national champions their first lead of the game.

The Sooners slowly crept even in the second half, and Hill's go-ahead bucket with 11 1/2 minutes to go started a 9-0 run.

Groves did most of the work, turning over Flagler and throwing down a dunk in transition, then taking a charging foul. That was before back-to-back baskets by Johnson — including a 3-pointer that just beat the shot clock.

With just two fouls down the stretch, Baylor began to aggressively use a full-court press, willing to give up a couple whistles for a couple turnovers. The strategy worked as Oklahoma twice coughed up the ball on inbounds plays and the Bears were able to get easy baskets to draw within 63-62 with 2 1/2 minutes to go.

That's when Gibson, the shortest guy on the court, came through with the biggest plays of the game.

Sochan colored his hair blue, one of the two colors of the Ukrainian flag, and wore messages of support on his warmup shirt and shoes for the nation currently at war with invading Russia.

“I think no matter what outcome we had, it was obvious there's something going on in this world that's not the best thing,” said Sochan, who was raised in England by a Polish mother and American father. “I think we're all connected in some way. What's happening isn't right. Just showing some awareness with whatever I can do.”

Oklahoma, which had lost four of its past five Big 12 Tournament games, used balanced scoring (five players in double figures) to put away the banged-up Bears. Seven players played at least 15 minutes, including Tanner Groves, who had five points and six boards while dealing with foul trouble.

Baylor still has never won a Big 12 Tournament title. It didn't help the Bears' cause that Kendall Brown, one of their best players, had to leave briefly early in the second half with an ankle injury. The loss should put into question their chances of earning a No. 1 seed for the NCAA Tournament.

The Sooners play No. 3 seed Texas Tech or sixth-seeded Iowa State for a spot in the title game.