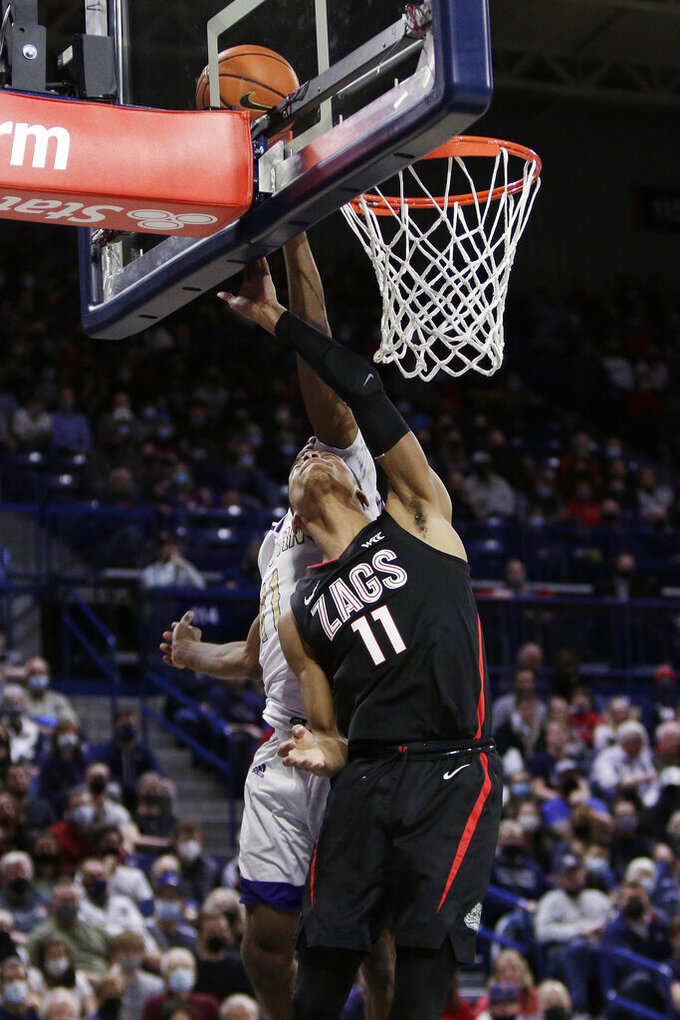 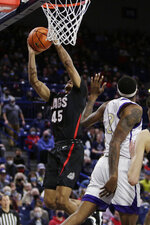 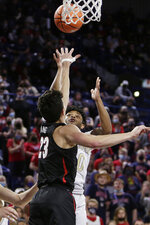 SPOKANE, Wash. (AP) — Eighth-ranked Texas is in the rearview mirror and No. 2 UCLA and No. 7 Duke are looming, but Gonzaga guard Julian Strawther says the Zags are focused on the present.

“Being able to attack every game is a big point of emphasis for us," Strawther said. ”Right now, our focus is on (Friday opponent) Bellarmine. We'll focus on next week when it comes."

The Zags were pretty focused on Alcorn State, jumping to a 45-21 halftime lead that grew to 35 points in the second half.

“The first half was exactly what we were looking to accomplish," Gonzaga coach Mark Few said. “It was a great defensive effort.”

“You've got to respect how hard Alcorn plays,” Few added, noting the Zags committed 13 turnovers as the Braves “knocked some things away from us.”

Freshman Hunter Sallis had 16 points for Gonzaga (3-0), which was coming off a decisive win Saturday over then-No. 5 Texas on Saturday.

“He's finding his baskets where he needs to find them,” Few said of Sallis. “He can really, really pressure the ball, too.”

Chet Holmgren had 11 points and Drew Timme, who was double-teamed, had 10 for the Zags, who shot 59% to Alcorn State's 40%. Gonzaga scored 54 points in the paint.

Keondre Montgomery scored 13 points for Alcorn State (0-4), which was no match for the taller Bulldogs. Justin Thomas added 10.

Alcorn State coach Landon Bussie praised his team for playing hard all 40 minutes, “especially in the second half fighting hard, not focusing on the score.”

Bussie said the game was a valuable experience.

“GU made us play every possession. Any mistake you make, GU takes advantage of it," he said.

Strawther had 15 points in the first half, while Holmgren had 11 points and three blocked shots.

Gonzaga substituted liberally in the second half, and still pulled away.

Gonzaga has been ranked No. 1 for 19 consecutive weeks, the fifth-longest streak in AP rankings history. This game won't hurt Gonzaga's chances of spending a 20th consecutive week atop the rankings.

Gonzaga won the rebound battle 38-26, and blocked six shots to Alcorn State's one.

Alcorn State: The Braves had no answer for Gonzaga's size and speed. ... They also lost at Washington State, Seattle and Portland in the past seven days during a trip to open the season. ... Gonzaga beat them in the only other meeting in 1992.

Gonzaga: It wasn't quite as electric in The Kennel as it was for the Texas game, but Gonzaga took care of business against an overmatched foe. ... Drew Timme's 37 points against Texas were third all-time in the McCarthey Athletic Center, behind Adam Morrison (42) and Ronny Turiaf (40). ... Gonzaga has won at least 30 games for five straight seasons and led the nation in scoring the past three seasons.

Gonzaga: Hosts Bellarmine on Friday, then plays neutral-site games next week against No. 2 UCLA and No. 7 Duke in Las Vegas. Strawther said he was excited for those games, because that's his hometown.