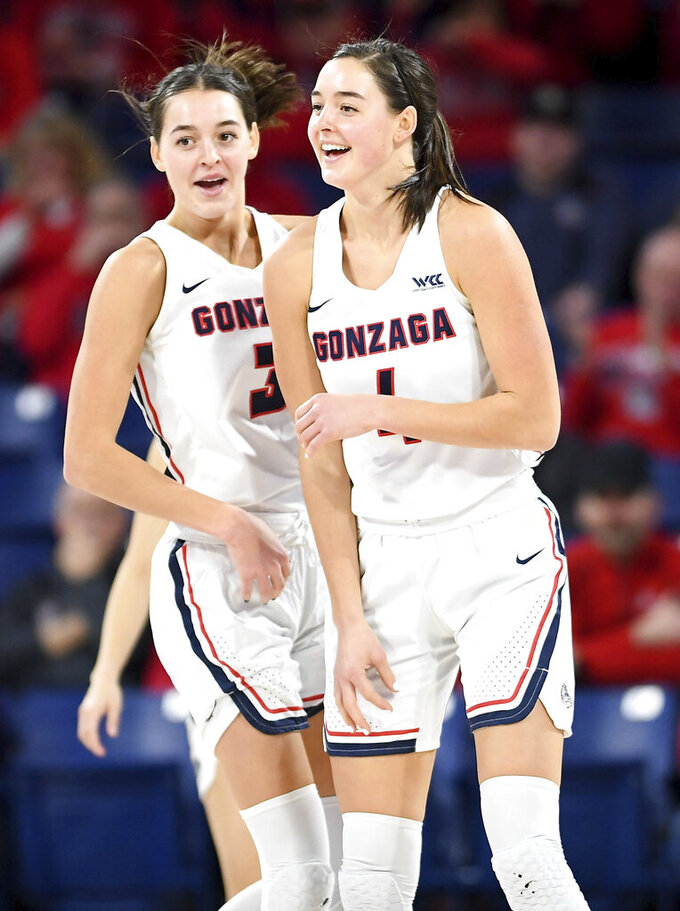 In this Jan. 9, 2020 photo, Gonzaga forwards LeeAnne Wirth (4) and Jenn Wirth (3), twin sisters, laugh between during the first half of an NCAA college basketball game in Spokane, Wash. (Tyler Tjomsland/The Spokesman-Review via AP)

RALEIGH, N.C. (AP) — Gonzaga and Michigan stood out in a study that seeded men’s and women’s NCAA Tournament brackets based on graduation rates, academic success and diversity in the head-coaching ranks.

The Zags were a No. 1 seed in both brackets released Thursday by The Institute for Diversity and Ethics in Sport (TIDES) at Central Florida, while the Wolverines were a 1-seed in the men’s bracket and a 3-seed in the women’s bracket.

Arizona State was the only other school to appear among the top 16 seeds in both brackets, seeded third in the men’s field of 68 teams and second in the women’s field of 64.

Institute director and lead report author Richard Lapchick said this was TIDES' first bracket report, which used data from annual studies released this week on graduation rates for NCAA Tournament teams. Those relied on final bracket projections from ESPN as a substitute after tournaments were canceled amid the coronavirus pandemic.

“It’s so that people will see and pay attention to the schools that are doing exceptionally well,” Lapchick told The Associated Press. “And maybe if they’re involved with a school that didn’t make it very far in the brackets or less than they would be predicted to do on the basketball court, then they may as alumni or current students begin discussions on those campuses of what we can do to move up in this particular bracket.”

Belmont and Bradley joined Gonzaga and Michigan as No. 1 seeds in the men's bracket, followed by Michigan State, Villanova, West Virginia and Boston University as 2-seeds. Other notable seeds included Virginia and Kansas as No. 4s, Duke as a 5 and Kentucky as a 7.

For the women, Rice, Samford and Stanford joined Gonzaga as No. 1s, followed by Creighton, Bucknell, Arizona State and DePaul as 2s. Other notable seeds included Connecticut as a No. 5, Louisville as a 6 and South Carolina as a No. 9.

Lapchick said TIDES plans to continue the bracket report among its annual studies that include diversity-hiring practices for college athletics and professional leagues such as the NFL, NBA, WNBA, Major League Baseball and Major League Soccer.