Timme back as No. 2 Gonzaga seeks elusive national title 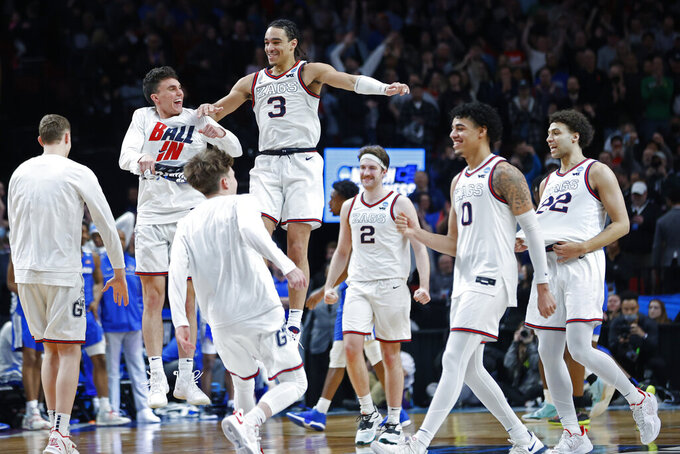 SPOKANE, Wash. (AP) — Drew Timme wasn’t ready to grow up, at least not without giving it one more shot at bringing an elusive national title to Gonzaga.

Timme is the leader of a Bulldogs team that should again be among the contenders to lift the championship trophy next April in Houston.

Gonzaga begins the season ranked No. 2 in the preseason AP Top 25. Not being in the top spot in the rankings has been an outlier for the majority of Timme’s career.

“We really believe if we stay true to who we are, the sky is the limit for us,” Timme said. “We demand a lot of ourselves.”

Timme's decision to return was a bit of a coup for Gonzaga, especially after Chet Holmgren made the expected decision to enter the NBA after just one season in Spokane.

Timme will be joined by fellow returnees Julian Strawther, Rasir Bolton and Anton Watson to make up the core of this group of Zags.

Young guards Nolan Hickman and Hunter Sallis will take on bigger roles this season. And Gonzaga was active again in the transfer portal, landing Malachi Smith, the Southern Conference player of the year last season after he averaged 19.9 points at Chattanooga.

“This team has a chance to do something special,” Timme added. “It’s going to be a fun, exciting, different team this year, and I’m excited to be part of it.”

Gonzaga went 28-4 last season before losing to Alabama in the NCAA Tournament. After reaching the national title game and losing in 2021, getting bounced in the Sweet Sixteen this year was a disappointing conclusion.

Timme has said his endorsements in Spokane, which include frequent comedic ads for a local casino, add up to what he might have earned as a second-round NBA draft pick.

“He’s the epitome of what’s good right now with NIL and everything that’s going on with the attention,” Gonzaga coach Mark Few said. “We’ve had some great characters over the years and also just incredible players, and he’s certainly at the top of all those lists.”

Few believes Timme’s persona sometimes overshadows what he has accomplished on the floor.

The Zags are 90-7 in his first three seasons, including that trip to the national championship game last year. He is the reigning West Coast Conference player of the year and a two-time second-team AP All-America selection.

The gauntlet is what Timme has called a three-week span when Gonzaga plays some monster opponents. This season it begins with Michigan State in the Armed Forces Classic on Nov. 11, played on an aircraft carrier in San Diego. That’s followed by a road game against No. 12 Texas on Nov. 16 and a date with No. 4 Kentucky at the Spokane Arena on Nov. 20. The Bulldogs play in the Phil Knight Legacy in Portland, Oregon, over the Thanksgiving holiday with a potential matchup against No. 7 Duke. They play No. 5 Baylor on Dec. 2 in Sioux Falls, South Dakota. They also play No. 20 Alabama on Dec. 17.

“I don’t think people give coach the credit for what he was able to pull off,” Timme said. “I don’t know how many people (would) do that because you could wind up losing all of them just as easily as you could win all of them.”

Gonzaga doesn’t have a significant amount of depth in the front court aside from Timme and Watson. A big addition — literally and figuratively — was LSU transfer Efton Reid III. The 7-footer started all 34 games for LSU last season and averaged 6.3 points while playing about 20 minutes per game.

For the 11th year in a row, Gonzaga was selected by coaches as the preseason favorite to win the West Coast Conference regular season title. The Bulldogs will open conference play on Dec. 31 against Pepperdine.

Gonzaga and Kentucky will play a six-game series beginning this year in Spokane. Gonzaga will go to Kentucky twice and there will be neutral site games in Nashville and Seattle before the series concludes in 2027 back in Spokane.