Timme's 22 lead No. 2 Zags past Spartans on carrier deck 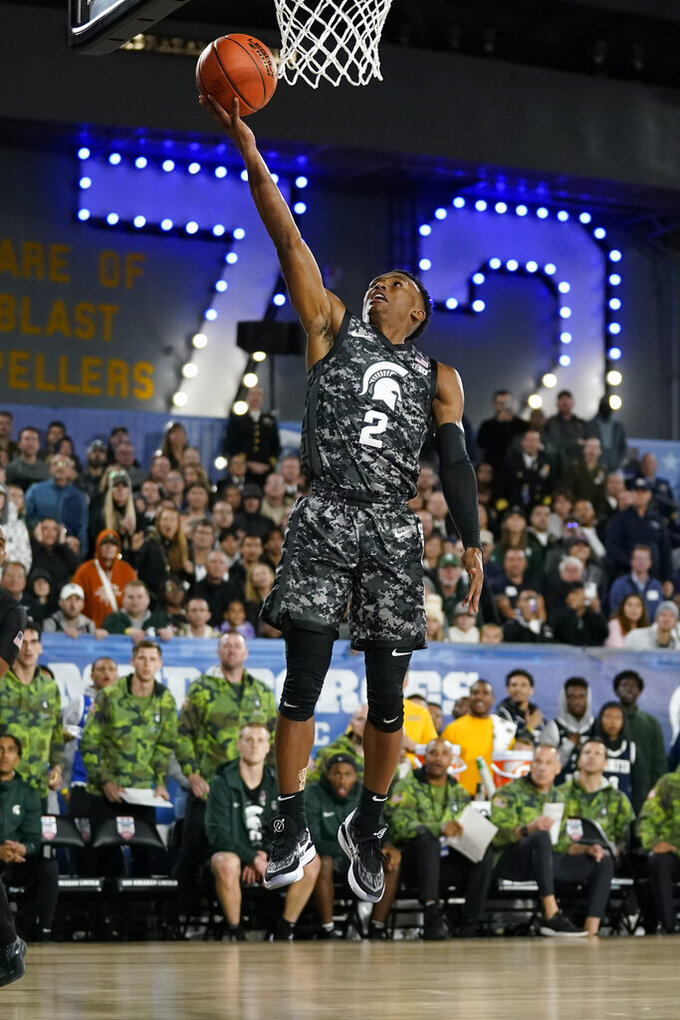 CORONADO, Calif. (AP) — Drew Timme likened it to the feeling of playing hoops in a park as a kid, only this time it was on the flight deck of one of the world's most powerful warships.

Timme led No. 2 Gonzaga in a spirited comeback from a 12-point deficit, finishing with 22 points and 13 rebounds as the Bulldogs beat Michigan State 64-63 Friday night on the USS Abraham Lincoln at North Island Naval Air Station.

“It's definitely something different. It's something you don't experience every day,” Timme said. “I think growing up playing in the park is something that helped us. And look, they had to play on it too. ... It wasn't the prettiest game to watch but it was just put your nose in the dirt and keep going and don't stop and I thought it was a true test of our grit and heart and I think we did a good job of answering the bell today.”

Timme twice gave the Zags the lead in the final 2:27. His inside shot made it 63-61 before Malik Hall answered with a hook to tie it. The Zags scored just one more point, when Timme made the second of two free throws with 1:51 left.

Gonzaga's Julian Strawther was called for traveling with 31 seconds left and Michigan State's Jaden Akins missed a desperation 3-pointer just before the buzzer.

“Gonzaga is who Gonzaga is because they’re really good,” Spartans coach Tom Izzo said. "But they’ve got a go-to guy. Down the stretch that guy he just rose up. That’s what he’s supposed to do.

“I want to feel so good about the setting, our fans, the veterans, the way our team played, but how do you feel good when you lose a game when you led for 30 minutes?” Izzo said. “It’s hard to do.”

Timme had tied the game at 55 with a 3-point play and Bolton tied it again at 59 with a big 3-pointer.

Strawther had 13 points and nine rebounds, and Nolan Hickman scored 10 for Gonzaga (2-0).

Michigan State big man Mady Sissoko scored 10 of his 14 points in the first half but committed his third foul early in the second half and didn't have much of an impact the rest of the way.

The Spartans (1-1) led 45-33 three minutes into the second half before Timme and the Zags went on an 11-0 run to pull to 45-44. Timme made a spin move layup, was fouled and made the free throw, and then fed Rasir Bolton for a baseline jumper to close within three points. Efton Reid III's slam dunk got the Zags to 45-44.

Tyson Walker made a layup with 12:10 left to break MSU's five-minute scoring drought.

As impressive as he was overall, Timme made just four of 10 free throws and could have given the Zags a cushion late in the game.

The game was played 11 years to the day after North Carolina beat Michigan State on the flight deck of the USS Carl Vinson at North Island NAS, with then-president Barack Obama and wife Michelle watching from courtside.

The teams wore camouflage uniforms with U.S.A. on the back. Just before the second half began, the crowd rose for the retiring of the flag at sunset. The crowd of 3,000 was made up mostly of sailors from the aircraft carrier as well as fans of both teams.

Michigan State led 38-31 at halftime largely on the strength of the powerful inside game of the 6-foot-9 Sissoko. Sissoko had three slam dunks in the final 5 minutes of the half, including on an alley-oop pass from A.J. Hoggard. His final two dunks helped the Spartans take control. Michigan State had consecutive steals, which had coach Tom Izzo emphatically pumping his fist.

Neither team was afraid to hoist 3-pointers and each team made a shot from behind the arc in the first two minutes. The wind appeared to affect just one 3-point shot as the six-level conning tower and the scoreboard blocked most of the wind off the Pacific Ocean.

Gonzaga: Timme returned for his senior season to take a final shot at bringing an elusive national title to Spokane.

Michigan State plays No. 4 Kentucky at Indianapolis on Tuesday night.

Gonzaga plays at No. 12 Texas on Wednesday night.