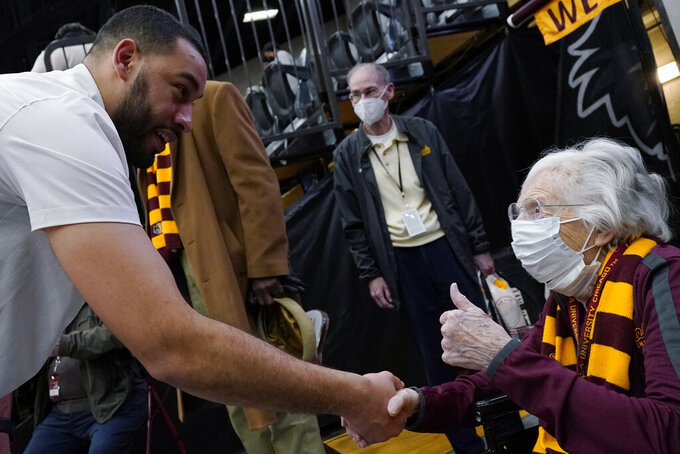 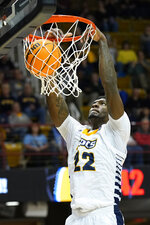 A look at what’s happening in the NCAA Tournament today:

After a couple of first-day shockers, Day 2 of the NCAA Tournament's first round features a dangerous double-digit seed with Loyola-Chicago matched against an Ohio State team that surely hasn't forgotten its overtime loss to a No. 15 Oral Roberts in last year's tournament opener.

The seventh-seeded Buckeyes are not trending in a good direction, coming in with losses in four of their last five. A couple of those were stinkers, too — one at home against Nebraska and one to Penn State in the first round of the Big Ten Tournament.

No. 10 seed Loyola is a program that knows how to win this time of year, and it never hurts to have Sister Jean on your side. Yes, the 102-year-old superfan and team chaplain traveled to Pittsburgh with the Ramblers.

This is the third tournament appearance in five years for Loyola. There was the Final Four run in 2018, and last year the Ramblers knocked off Illinois to reach the Sweet 16.

The oddsmakers certainly don't forecast a blowout in this Missouri Valley Conference vs. Big Ten matchup. The Buckeyes are just a one-point favorite, according to FanDuel Sportsbook.

The game between 10th-seeded Davidson and No. 7 Michigan State not only will determine the opponent for a probable second-round meeting with and Duke and retiring coach Mike Krzyzewski. It also gives Davidson's Foster Loyer a chance to reconnect with some old friends.

Loyer was a Michigan State captain last year and started seven of 19 games before an injury ended his season. He played 86 games with the Spartans over three seasons but never came close to making the impact he has with Davidson.

“Foster Loyer didn’t leave here in a bad way, he left here in a great way,” Spartans coach Tom Izzo said, "and (MSU players) — a lot of them stay in touch with him.”

Remember Silvio De Sousa, who never was far from trouble when he was at Kansas? The 6-foot-10, 250-pound center resurfaced at Chattanooga and gives the 13th-seeded Mocs a chance against star big man Kofi Cockburn and No. 4 Illinois.

De Sousa was a reserve on the 2018 KU team that reached the Final Four and sat out the next season under suspension when the FBI's investigation into college basketball recruiting revealed his guardian had accepted money from an Adidas representative.

He didn't do much when he returned for 2019-20 — other than get suspended 12 games for his role in a melee at the end of a game against Kansas State — and he sat out last season for personal reasons.

He's stayed out of trouble at Chattanooga and given the Mocs an imposing inside presence. He's started 24 games and averages 11 points and seven rebounds.

De Sousa’s collegiate career is the subject of a documentary called “Nothing But Net,” which is in post production. It is directed and written by Billy Raftery Jr. It is being produced by Point Road Productions, in collaboration with NBA Hall of Famer Kevin Garnett’s Content Cartel and Emmy Award winner Marc Levin’s Blowback Productions.

Arizona, the top seed in the South, played two games in the Pac-12 Tournament without point guard Kerr Kriisa and should be able to beat Wright State in the first round.

Coach Tommy Lloyd said before Thursday’s practice that the sophomore could make a quick return. Lloyd left open the possibility of Kriisa not starting and playing limited minutes Friday.

“It’s going to be a game-time decision,” Lloyd said. “He’s made great progress. Our goal was to push it, see how close we could get him to playing. And I think he’s close”

Kriisa suffered a nasty sprained ankle when he collided with teammate Christian Koloko in the final minute against Stanford on March 10. He was helped off the court and was in a wheelchair when the team headed to the bus.

He was asked Thursday what he remembered about his first tournament game with Duke, in 1984. He didn't hesitate, recalling how the 80-78 first-round loss to Washington ended on an inbounds pass meant to be an alley-oop to Johnny Dawkins.

Dawkins and Washington’s Clay Damon collided going for the ball and the clock ran out.

“Yeah, Johnny Dawkins got undercut, and there was no call in Pullman, Washington,” Coach K said. “So that was my first experience, and we lost a real close game.”