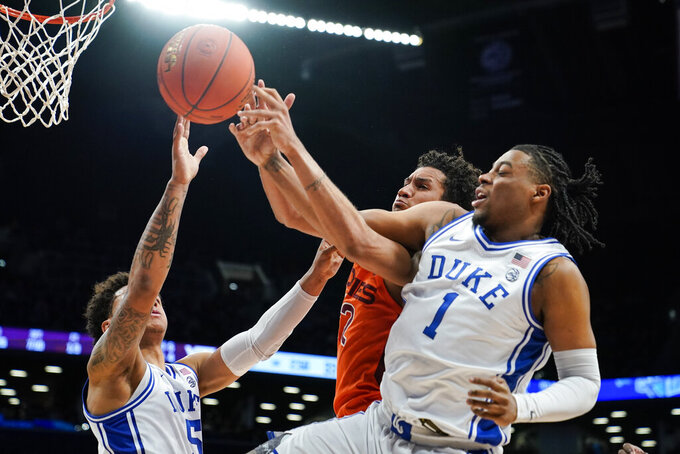 This time it was Virginia Tech playing party pooper.

Hunter Cattoor scored a career-high 31 points and the seventh-seeded Hokies won the Atlantic Coast Conference Tournament for the first time, beating Duke 82-67 to deny Mike Krzyzewski a league title in his final season.

Virginia Tech (23-12) came to Brooklyn in need of a run to make the NCAA Tournament, and then was staring at elimination Wednesday night when Darius Maddox hit a go-ahead 3-pointer at the buzzer to beat Clemson in overtime.

Virginia Tech coach Mike Young said the Hokies were “luckier than hell” after that game.

After beating Duke how did it feel?

The Hokies became just the second ACC team to take the crown with four wins in four days and the lowest-seeded team to win the most-storied conference tournament in college basketball.

They're also the fourth ACC champion to win the title by beating the top-three seeds.

Duke lost Coach K’s final game at Cameron Indoor Stadium to rival North Carolina a week ago, derailing what the school hoped would be a celebration of the winningest coach in Division I men’s college basketball.

The top-seeded and seventh-ranked Blue Devils (28-6) got another chance for a feel-good victory and to add at least one more trophy to the case for the retiring Hall of Famer. Again it was not to be.

“I tell them all the time: 'Don't worry about me,'” Krzyzewski said. “Even in a moment of defeat I want to be there with them. How do we use it? How do we get better?"

Krzyzewski has been trying his best to shield his team from all the attention give his last go-round.

“Last weekend the whole word was talking about it. So it was a very difficult weekend,” he said. "What we've tried to do is eliminate everything. These are young guys. I've loved coaching them. I think we can be good in the (NCAA) Tournament. I was really positive with them afterwards.”

When Justyn Mutts made a two-hand slam over Duke's star freshman Paolo Banchero with 2:26 left in the second half, Virginia Tech led 76-64 and the outnumbered Hokies fans rose with roar.

“The next dead ball we went to the huddle and it was like, ‘We can taste it. We can taste it now,’” point guard Storm Murphy said.

Virginia Tech's first ACC championship since joining the conference in 2004 was sealed.

Soon after Metallica's “Enter Sandman,” the Hokies' unofficially fight song, blared throughout Barclays Center and the Virginia Tech fans sang along like it was the fourth quarter at Lane Stadium in Blacksburg, Virginia.

Banchero scored 20 points for Duke, which shot 4 for 20 from 3-point range and allowed the Hokies to make 50% of their shots.

Virginia Tech’s last — and only — conference tournament title came in 1979 when the Hokies were in the Metro Conference.

Young led Wofford to five Southern Conference Tournament titles in 17 seasons. It only took him three season to get his first with Virginia Tech and he did it with a roster full of guys he recruited to play at his old school.

Murphy and Keve Aluma (19 points, 10 rebounds and seven assists) are both Wofford transfers and Cattoor was set to go to the Spartanburg, South Carolina, school out of high school before Young took the Virginia Tech job.

Meanwhile, Krzyzewski was denied his 16th ACC title in his 42nd season.

Barclays Center is a long way from Cameron, both literally and figuratively, but the Duke fans did their best to make it feel like a Blue Devils' home game.

Still, nothing came easy for Duke this week. The Blue Devils didn’t have a halftime lead in any of the games at Barclays Center.

On Saturday night, down three at half, Duke began the second half with a sloppy turnover on offense and then gave up a driving layup.

Krzyzewski called a timeout 35 seconds in and laid into his team, getting out of his chair to demonstrate the movement he wanted to see from his players.

The scolding did not have the desired result. Cattoor swished his sixth 3 and then made a steal he turned into old-fashioned three-point play with a driving layup.

That put the Hokies up 55-45 less than five minutes into the half.

When Cattoor made his seventh 3 from the top of the arc with 6:05 to play, the Hokies went up 70-60 and it became apparent this was Virginia Tech’s night to celebrate.

Krzyzewski praised the way the junior moves without the ball. “He had a Klay Thompson night,” he said.

Virginia Tech: The Hokies were 2-7 at one point in ACC play, but finished with a kick, going 13-2 to play their way off the bubble.

“I knew when it came together it was going to be a beautiful thing and they came together,” Young said. “I didn't think it would culminate in this, But we're not going to give it back.”

Duke: Krzyzewski came into the tournament worrying about his team's defense and then it played three shaky games on that end in Brooklyn. He still believes there is time to turn it around.

“Very confident because we'll be able to practice,” Krzyzewski said, noting the youthful Blue Devils had only one practice since the North Carolina game.

Virginia Tech: The Hokies are in the NCAA Tournament for the fifth straight season.

Duke: The Blue Devils are probably looking at a No. 3 seed when the bracket is set Sunday.