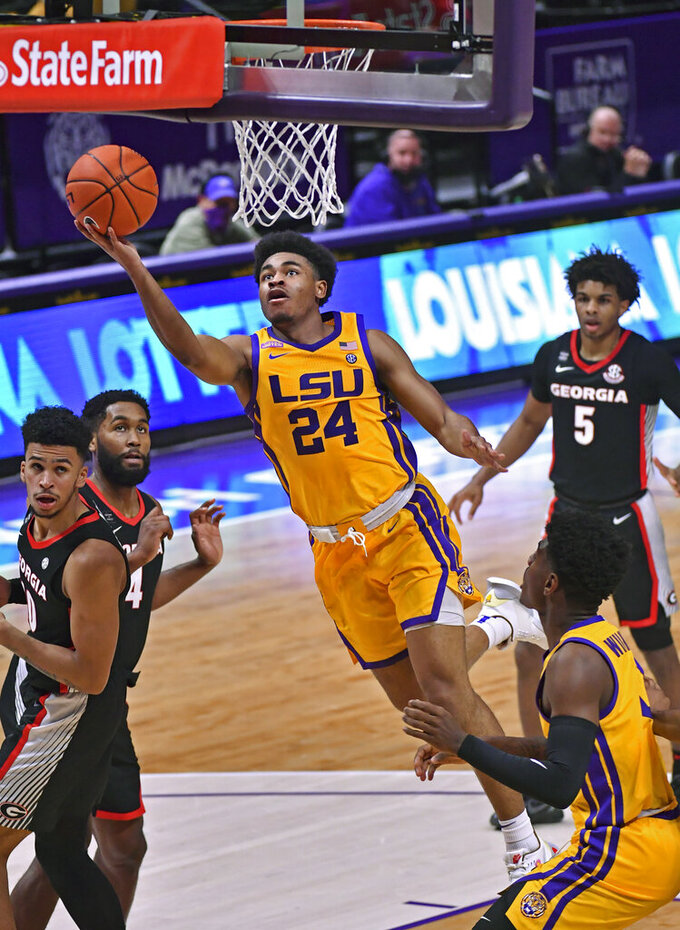 LSU guard Cameron Thomas (24) gets the layup against Georgia during the first half of an NCAA college basketball game Wednesday, Jan. 6, 2021, in Baton Rouge, La. (Hilary Scheinuk/The Advocate via AP)

Arkansas at Alabama. The Crimson Tide (10-3, 5-0 SEC) stands alone atop the league standings after an 85-65 win over Kentucky at Rupp Arena. It's the first time Alabama has won its first five SEC games since 1987. The Tide has averaged 88.3 points over the last three games, but the Razorbacks (10-3, 2-3) are averaging a league-best 87.2 points per game. They're also two of the top three SEC teams in made 3-pointers. But Alabama will be without forward Jordan Bruner, who's out indefinitely with a knee injury sustained against Kentucky. Point guard Jahvon Quinerly has missed the past three games for undisclosed reasons, and guard Herbert Jones sustained a hand injury in Tuesday night's game. His status wasn't immediately known. Arkansas freshman Moses Moody is averaging 16.8 points and JD Notae is averaging 15.9 points. Alabama is led by Jaden Shackelford's 13.5 points and John Petty's 13.3.

Sharife Cooper, PG, Auburn. The freshman has instantly become the Tigers' best player after missing the first 11 games before being cleared to play by the NCAA. He had 26 points and nine assists in a loss to Alabama. Then he followed up with 28 points, 12 assists and five rebounds against Georgia to lead Auburn to its first SEC win. Cooper was the highest rated recruit in program history.

LSU freshman guard Cameron Thomas has a slight edge over Vanderbilt's Scotty Pippen Jr. for the league's scoring lead. Thomas is averaging 21.8 points, Pippen 21.6. ... Kentucky's 20-point loss to Alabama was the Wildcats' largest home defeat since a 75-52 loss to Indiana on Dec. 20, 1988. ... Auburn's 95 points against Georgia was the most the Tigers have scored in regulation in an SEC game since beating LSU, 95-70, on Jan. 27, 2018. ... LSU has put together two straight dominating first-half performance. LSU took a 51-31 lead into halftime against Arkansas and led Mississippi 39-21 at the half. ... Florida outscored Mississippi 20-2, including the last 14 points, to rally from a nine-point deficit in the final six-plus minutes.

No. 14 Mississippi State is set to visit seventh-ranked Texas A&M in the Aggies' second straight big Sunday showdown. The Aggies entered the week fresh from a dramatic win over No. 17 Arkansas, winning 74-73 on Jordan Nixon's last-second basket. Arkansas transfer Aaliyah Wilson came up huge against her former team with 27 points and a key defensive play late. Texas A&M's 12 wins entering the week was the most among ranked women's teams. ... No. 12 Kentucky's Thursday night road game was postponed because of coronavirus issues within the Auburn program.