Baylor defense too much for Villanova in flat 2nd half 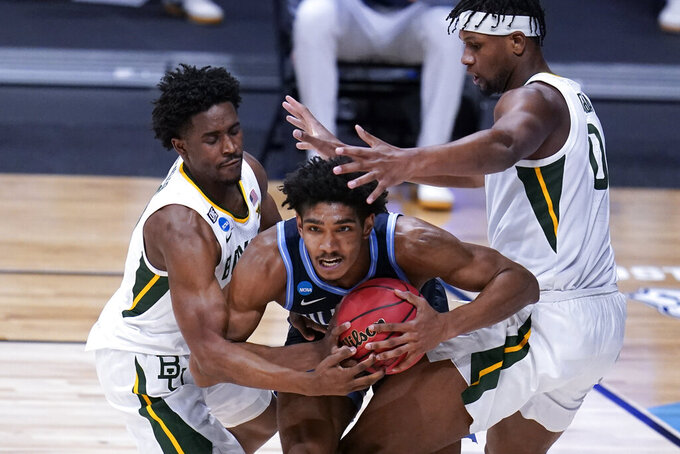 On Saturday, the two-time national champion coach finally ran out of answers.

The Wildcats' stout defense wore down, their steady offense stalled and their worst half of the season was their last as they lost 62-51 to top-seeded Baylor in a South Region semifinal.

“They really got into our guards and prevented us from initiating offense," Wright said. “They contested every pass, every cut, and it actually took us out of running offense. We had to drive the ball and get some post-ups and we didn’t do a very good job of that, but the credit goes to their defense."

Injured captains Collin Gillespie and Dhamir Cosby-Roundtree watched helplessly in street clothes, unable to stem the tide. Brandon Slater spent most of the final 10 minutes receiving treatment on his injured leg. Wright called timeouts to regroup and kept urging his team to find a way to turn things around after 30 minutes of solid basketball.

But it was easy to dissect how Villanova blew a 30-23 halftime lead.

The Wildcats missed all nine of their 3-point attempts in the second half and finished 3 of 17, their second fewest made all season. Villanova was a dreadful 5 of 44 from beyond the arc in two games at Hinkle Fieldhouse this season — the first was a loss to Butler.

After a superior defensive first half, the Wildcats allowed 39 points after the break while matching a season low by scoring only 21.

Plus, under the constant pressure of Baylor's in-your-face defense, Villanova had 16 turnovers — one short of a season high. Five came on consecutive possessions during the key stretch when Baylor (25-2) scored eight straight to retake the lead. The Bears never trailed again.

“We got sped up a little," said Jermaine Samuels, who led Villanova with 16 points but was limited to four shots in the final 20 minutes. “During those times you have to be good with the ball. We weren’t good with the ball and we got spread out in transition."

The offense never really recovered, and when Slater exited with 9:37 to play the defense wilted, too.

This time, against one of the title favorites, Wright couldn't devise a way out.

“We can learn a lot from this," Wright said. “You play a good opponent like Baylor, a great opponent and you give them credit and learn from them. Their defensive intensity, their ability to take care of the basketball on the offensive end, that’s what it takes to advance."