Buffen, Tyree double up to send Ole Miss past Seattle 65-52 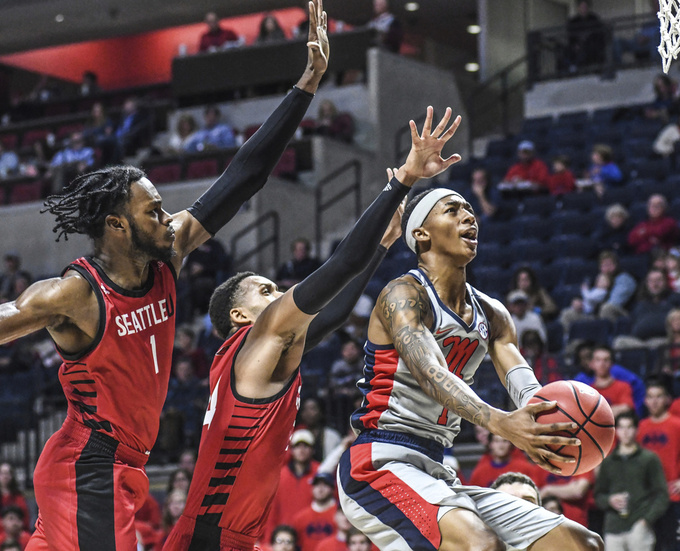 OXFORD, Miss. (AP) — The Mississippi Rebels had two different defensive performances in a 65-52 win over Seattle Tuesday, and it did not go unnoticed by coach Kermit Davis.

“For 29 minutes, we guarded them at the level we expect,” Davis said. “In the final eight minutes or so, I was embarrassed as I've been as head coach here by the way we played.”

Ole Miss (4-0) was never seriously threatened as KJ Buffen and Breein Tyree scored 13 and 10 points, respectively. The Rebels led 30-17 at halftime and by as many as 28 points, the final time on a jumper by Luis Rodriguez, for a 52-24 lead with 11:09 left. Buffen had a game-high eight rebounds, while Tyree added a game-high five assists.

“After we built the lead, we seemed to lose our way and we just didn't compete. Seattle kept playing hard,” Davis said. “Things are really fixing to change in the next two weeks with the teams we're about to play. The schedule goes up. We will compete. We won't make that mistake again.”

Ole Miss out rebounded the Redhawks 39-31.

“Virginia is the top defensive team in America, but Ole Miss is top five,” Seattle coach Jim Hayford said. “It's so hard to score on them. Our men battled and finished, but you've got to give Ole Miss credit. They were good last year. They're better this year.”

Seattle: The Redhawks managed only two field goals, 2-of-18 shooting, during a 12-minute stretch in the first half that settled the issue.

Physically, Hayford's club did not appear overmatched and has a solid inside-outside combination with 6-foot-9 Myles Carter and Brown, the offensive leader in every statistical category.

Ole Miss: The Rebels have put together decisive scoring spurts in each of their four season-opening wins at home. This time it was a 21-5 run, highlighted by Tyree and reserve freshman guard Austin Crowley, that built an insurmountable 30-14 lead. Ole Miss has been impressive in racing to a 4-0 start, but the non-conference schedule increases in difficulty immediately with three consecutive road games.

Seattle: The Redhawks face Bucknell in the NIT Season Tip-Off on in Orlando, Fla. On Monday.