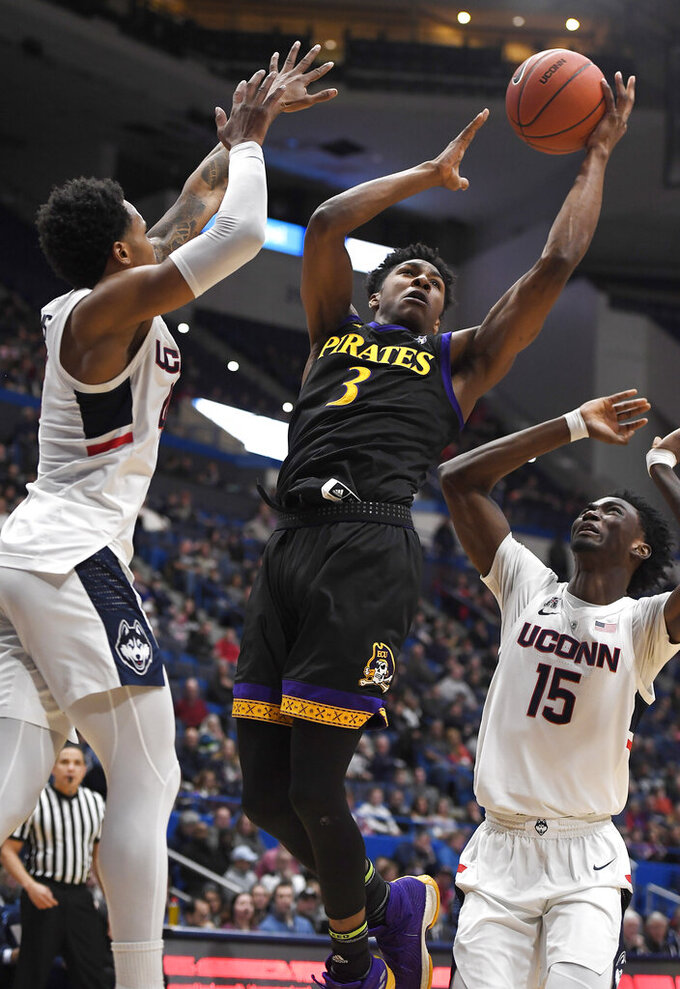 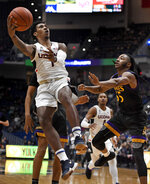 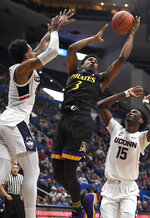 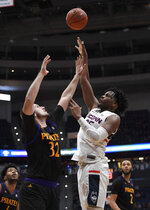 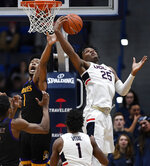 Sophomore forward Josh Carlton had his best night in a Connecticut uniform, scoring 20 points and grabbing 16 rebounds in a 76-52 win over the Pirates on Sunday.

"Anytime we can, we want Jalen on the floor, but having all the young guys out on the floor was very, very nice," Carlton said.

"They swarmed the ball and we're obviously not a great 3-point shooting team," said ECU coach Joe Dooley. "We took more bad shots in the first half than we have in the last four or five games."

Carlton had his first career double-double by halftime with 12 points and 10 rebounds, helping UConn to a 32-26 lead at the break. The 6-foot-10 sophomore had another basket waived off at the halftime buzzer.

Adams, who averages just under 19 points a game, was held scoreless, missing all six of his shots from the floor. He was pulled from the game early in the second half, walking away from Dan Hurley as the coach was talking to him. That led to a more animated exchange that ended with Adams seated for the rest of the game.

"His game was over at that point, regardless of where the score went," Hurley said. "We could have lost by 18, he was done."

UConn led 37-31 when Adams took a seat. The Huskies outscored the Pirates 39-21 the rest of the way.

"You wouldn't think we'd get better with the best player benched in the second half, but that's what happened," Hurley said.

The Huskies held ECU leading scorer Jayden Gardner (18.8 points per game) to just nine points. The freshman's driving 3-point play helped the Pirates to an early 5-1 lead. But that was his only field goal of the first half. UConn's defense, led by Tyler Polley and Sidney Wilson, allowed him just two baskets on 10 shots during the game.

"We just had to rally around each other, play together, play as a team and that's what we did," Polley said.

ECU: The Pirates fall to 0-8 in true road games this season, including 0-5 in the AAC.

"I think youth is part of it," said Dooley, whose team starts Gardner, three sophomores and senior Isaac Fleming. "I think inexperience and I think we need to continue to recruit guys that belong in the American."

UConn: Point guard Alterique Gilbert missed his second straight game with a bruised left shoulder. This is the same shoulder Gilbert has had surgically repaired three times, causing him to miss all but nine games during his first two seasons at Connecticut.

The Huskies improved to 12-2 at their two home arenas, the XL Center in Hartford and Gampel Pavilion on campus. They have won their last four home games.

UConn: The Huskies begin a two-game road trip in Philadelphia on Wednesday against Temple before heading to Memphis for a game next Sunday.