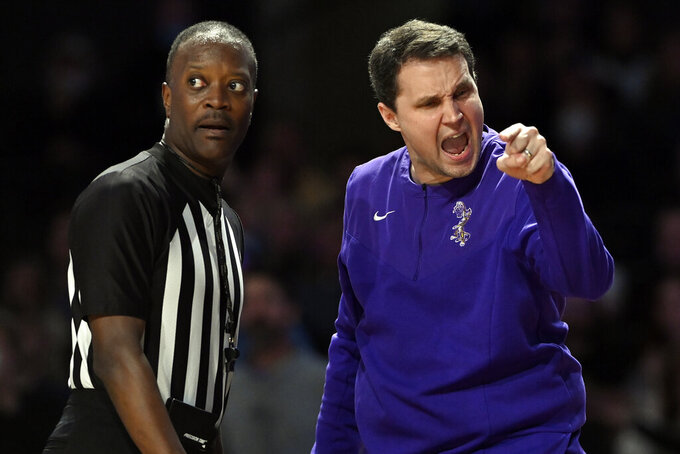 LSU coach Will Wade argues a foul call with an official during the second half of the team's NCAA college basketball game against Vanderbilt, Saturday, Feb. 5, 2022, in Nashville, Tenn. (AP Photo/Mark Zaleski) 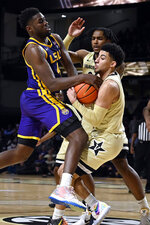 NASHVILLE, Tenn. (AP) — Coach Jerry Stackhouse wanted guard Rodney Chatman at Vanderbilt, even if only for one season.

Chatman scored a season-high 24 points and made a career-high six 3-pointers as Vanderbilt beat No. 25 LSU 75-66 on Saturday night for the Commodores' biggest win this season.

“He’s a winner,” Stackhouse said of Chatman. “Nothing against our guys, but just over the last two years we hadn't put a lot of wins in the column ... We've lost a lot of close games. Sometimes to get over that hump, you have to have an influx of winners in there, and that’s Rodney.”

A graduate student, Chatman played his first two seasons at Chattanooga and two more at Dayton, including starting on the 2019-20 team that went 29-2.

“I feel confident, the guys are confident in me,” Chatman said. "And it just felt good before the game, so it translated to the game.”

Vanderbilt (12-10, 4-6 Southeastern Conference) now has won two of its last three. Stackhouse is now 2-9 against top 25 teams, and both have come against LSU and coach Will Wade, a Nashville native, inside Memorial Gym on the same date.

With the victory, the Commodores also matched their most wins since going 12-20 in the 2017-18 season.

Myles Stute helped Vanderbilt protect its lead in the second half by knocking down three of his five 3-pointers. He finished with 17 points. Jordan Wright added 13.

“We need better play from a lot of folks,” said Wade, who didn't talk to reporters until 50 minutes after the game. “What we're doing is not, it’s not good enough. It’s not good enough on a lot of fronts. We need a lot of guys to step up and certainly play better as we kind of work our way through this slump.”

Eason and Gaines tried to rally LSU with 9:47 left trailing 69-48. They started a 16-0 spurt with a pair of layups, and the Tigers forced six turnovers as Vanderbilt suddenly couldn’t get the ball over half-court. Eason hit two free throws, then dunked pulling LSU within 69-64 — the tightest margin since early in the game.

Pippen made a free throw for Vanderbilt, then Stute got a steal and Chatman sealed the win with his sixth 3 with 3:27 left off a pass from Pippen.

Chatman had a season-high with 16 points by halftime. Vanderbilt led by as much as 20 before taking a 43-25 lead into halftime.

LSU: The Tigers struggled with 3-pointers, making only 1 of 8 in the first half. And a defense that is the SEC's best, and fifth nationally, defending against the 3 gave up a season-high 13.

Vanderbilt: The Commodores played without center Liam Robbins, who made his season debut in Wednesday night's loss at Kentucky. Stackhouse said Robbins sprained an ankle late in practice Friday, the same foot that had been surgically repaired. Stackhouse said the X-ray was negative, an MRI will be a precaution and Vandy hopes to get him back quickly. They didn't miss the 7-footer as they dominated the boards early with a 22-10 edge by halftime.

This loss should be enough to finally drop LSU out of the top 25 after being ranked nine straight weeks.

Vanderbilt: Hosts Missouri on Tuesday night before a two-game road swing against a pair of ranked teams.