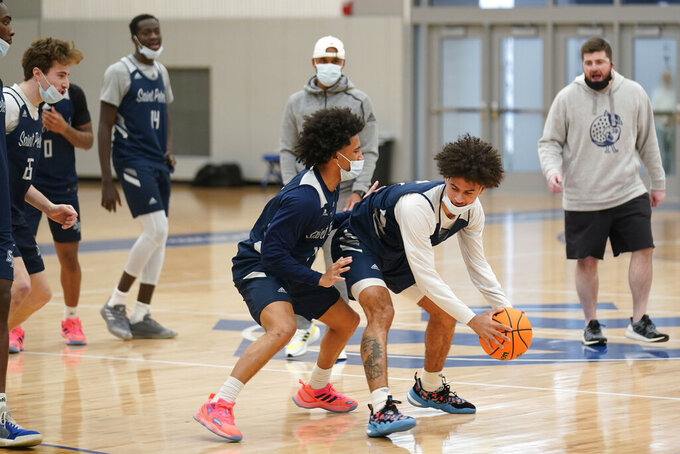 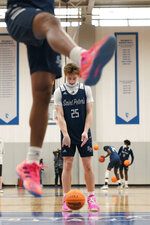 JERSEY CITY, N.J. (AP) — Saint Peter's University is so small, one could motor down John F. Kennedy Boulevard and drive right past it without noticing.

A pedestrian walkway bears the name of the Jesuit-run school, but it's easy to miss the 5-foot letters amid an urban forest of apartment buildings, storefronts and duplexes in the state's second-most-populous city.

The Peacocks weren't just little-known nationally before this year's NCAA Tournament. They don't even have a high profile locally. Barring traffic, it's a 10-minute drive through the Holland Tunnel from the tiny campus to Lower Manhattan, but the city skyline isn't even visible from Run Baby Run Arena, the 3,200-seat gym where Saint Peter's laid the groundwork for this year's stunning success.

That's the beauty of the NCAA Tournament, the way a school that's an afterthought when the brackets are announced — think George Mason, Florida Gulf Coast or Oral Roberts — can turn into the darling of the ball. The 15th-seeded Peacocks of Saint Peter's (22-11) are this year's Cinderella, and midnight will have to wait after they knocked off No. 2 seed Kentucky and No. 7 seed Murray State.

Daryl Banks III, who scored 27 points in the win over the Wildcats, doesn't mind the label.

“It's March Madness. One team throughout the tournament is usually labeled with that,” Banks said. “It's fun but I think we deserve to be here.”

That might be an understatement, given what the Metro Atlantic Athletic Conference champions have done to set up a third-round game against No. 3 seed Purdue (29-7) in Philadelphia.

Talent-rich Kentucky was a threat to win it all, or at least that was considered far more likely than Saint Peter's beating the Wildcats, then winning again to become the third 15 seed ever to reach the Sweet 16. Even those who bothered to research the Peacocks' season and history in the Big Dance might have come away underwhelmed.

Saint Peter's was winless in its three previous trips to the NCAA Tournament, the last in 2011. The team got off a 2-5 start and went 28 days without a game (Dec. 18-Jan. 14) because of COVID-19 issues. It had a 12-11 record in mid-January and entered the tournament with rumors swirling that coach Shaheen Holloway would depart for a job at Massachusetts or his alma mater, Seton Hall — which now has a vacancy.

Holloway and his players didn't care. The group grew up mostly in the New York City area. Bypassed by bigger schools, they play with an edge, making big shots and allowing few easy looks on defense.

“How we started off the season and what we are doing now, there is nothing else for people to say,” guard Matthew Lee said. “They have been doubting us the whole season and I hope they're now tired of doubting us.”

Jersey City doesn't have much hoops history, except at the high school level where Bob Hurley won 26 state titles at St. Anthony, a school that no longer exists.

At Saint Peter's, the only team that got much attention was the 1967-68 squad that knocked off Duke to make the NIT semifinals.

Tom Mac Mahon, who played on that team, went on to turn Labcorp into one of the country's major clinical laboratory chains. He was a driving force behind renovating the arena and giving it the Run Baby Run name to honor that '68 team.

“I think for somebody like me who follows them so closely, they obviously peaked at the right time and they’re getting better,” Mac Mahon said. “We’ll see what happens in the next one. But they’ve satisfied all my needs as a basketball fan at Saint Peter’s for the rest of my life.”

They've also drawn more attention toward the school of 2,134 undergraduates. At Tuesday's on-campus media day, there were 13 television cameras and about two dozen reporters.

“It’s pretty cool to see how little this small school on the Boulevard gets the recognition worldwide.” said Schneider Tout-Puissant, a freshman at Saint Peter's who grew up not far away in Union and admitted he didn't think the Peacocks would beat Kentucky.

Players returned to campus Sunday to a welcome-back rally after beating Murray State. They got the rock-star treatment when they walked into the campus cafe the next day, getting swarmed for selfies by classmates, many of whom are on a first-name basis with the now-famous Peacocks.

“The thing about here compared to other universities is we all kind of know each other. We all have interaction,” said senior Evaristo Solano-Lopez, 23, of New Brunswick. “So it’s just beautiful to have that because we know where some of these players come from because we come from similar backgrounds. It’s just beautiful.”

Cornacchia said there has been an uptick in applications since last week.

“Certainly the attention we’ve gotten is priceless,” Cornacchia said, suggesting that only a faculty member winning a Nobel Prize or finding a cure for cancer would get as much attention. “You couldn’t pay for this kind of marketing. So for us, it’s going to mean I suspect more applications, more enrollments, more fundraising, all good things for us.”

Walking on Kennedy Boulevard and Montgomery Street adjacent to the school, there are almost no signs or banners to recognize the Peacocks' accomplishment.

McGinley Square Pub is one exception. Owner Angelo Hatzipetrou had a banner made proclaiming “Miracle on Montgomery St.” with “Let's Go Peacocks” in bold letters underneath.

“This is great for the city, the state, the neighborhood, it's an historic run, one of the top three underdog runs in history, top five, who knows?” Hatzipetrou said.

Bob Leckie, a former Peacocks coach and a member of the ’68 team, said it’s going to be hard for Saint Peter's to retain the 45-year-old Holloway, one of five coaches of color in the Sweet 16.

“Realistically speaking, he’s got to move on to bigger and better things when the opportunity arises and this is it,” said Leckie, who didn't hesitate to say the current team is the school's best.

Cornacchia does have a concern, pointing to the trend of schools joining super conferences, getting richer in the process and leaving smaller schools to fend for themselves.

“How can we all play within the NCAA Division I with all of the talk that’s going on out there about what’s going to happen?” he said. “We don’t know yet, of course, until the dust settles. But you know, you won’t have Cinderella stories unless you have us in the Division I. You know, then it’ll just be a big team against big team.”